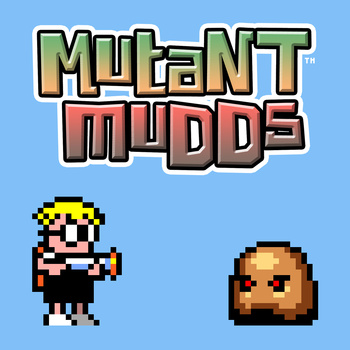 “Darn you Renegade Kid!”’ was a phrase that could easily be heard as I fell to my death while playing their new eShop game, “Mutant Mudds.” This is Renegade Kid’s first attempt with 3D and the eShop channel, and I have to say they did a great job. 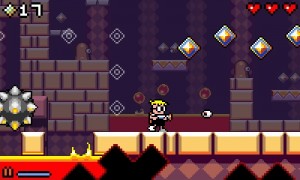 In Mutant Mudds you play as Max who finds himself thrust into saving his world from an invasion of mud creatures. Armed with a water powered pistol and jetpack, Max takes on 40 levels to collect hidden water sprites, which he needs to get rid of the mud creatures.

Mutant Mudds is everything you would want from a classic 8-bit platformer, difficulty and all. There is no running and gunning but strategic timing moves and jumps. You will find yourself going back to your trial and error years that so many games these days are missing. “Well that platform is a little farther than I thought.” “Oops, did not know that would be there.” “That was just evil having that there.”

What really separates Mudds’ 3D visuals from other 3D games has really nothing to do with the 3D itself but the design of the game. Each level is designed in three layers. The starting middle layer, the far back layer, and the up-front layer. During the game Max finds his way around, these three different layers, by using warp pads that send him forward or back. With the 3D this adds a cool aspect to the game, which has you peering through two layers to view a Max on the back layer. 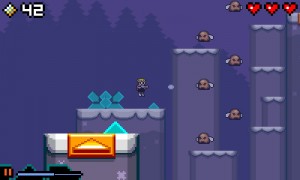 In each level there are hidden doors that takes Max to bonus levels. Let me warn you these areas are usually designed in darker colors, which I am guessing is to represent how difficult these bonus levels are…very difficult if you didn’t get my drift.  With the addition of these secret areas there are a 100 diamonds to collect in each level and two water sprites; one at the end of the normal level and one found at the end of the bonus stage. This adds a lot of replay value to the game by trying to collect everything that needs to be collected.

I have been playing Renegade Kid games for a couple of years now and one of the things that has always impressed me has to do with the music and sound effects of their games. Seeing Mutant Mudds is homage to all things 8-bit. Renegade Kid did not skip out on the sounds of the game. Troupe Gammage was chosen to create the music for Mutant Mudds and I would like to take this time and congratulate him on a job well done.

I was curious and scanned a few scores that other sites have given Mutant Mudds. All of them have been very positive so far. I did realize they seem to shy away from giving it a perfect score. Mutant Mudds has an amazing musical score, great level design, perfect controls and a great price. What more could you ask for in an eShop game? Yes, there are a lot of great eShop games out there but none of them can be said are better than Mutant Mudds. For this reason I have to give Mutant Mudds a score I have never given out. 10/10.