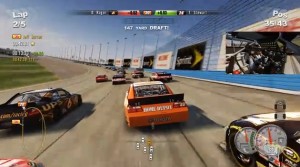 I am not a big fan of racing simulators, arcade simulators I can get behind, but racing I am down right awful playing. Lets not say it’s a reflection of my real driving skills. To prepare myself to play NASCAR 2011, I put in a video of the greatest racer of all time…Ricky Bobby! I was hyped, ready, and wanting to go fast.

The first thing someone may notice about NASCAR 2011 is the graphics. I am not sure of an adjective to use that will keep this review under an R rating. I will just put it this way; the graphics are uber-horrible. No uber-horrible is to kind of word. I would have hated these graphics if the game were released on the 64. 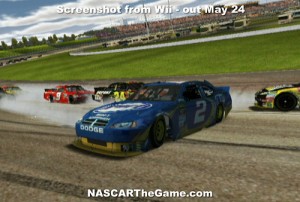 Ok maybe people do not play NASCAR game just for the graphics. They play it for the sense of racing a real racecar. I have never personally raced around a super speedway, even if I wish I had, but how I imagined the experience to feel like came across in NASCAR 2011.

For me NASCAR 2011 was not a game for a casual racing fan. NASCAR 2011 was a game for those who breath and slept the rubber, and exhaust. The game did supply an easy mode that made it playable for people like myself. But were the game really shines is the more advance modes. In most racing games I play you just put the pedal to the ground, break a few times, and see your opponents fall behind. In NASCAR 2011 you have to know what the heck racing is all about. Drafting, damage, tire pressure, being to loose, to tight, riding the wrong line, fuel, etc, all become a factor to finishing in first or a lap down. (Where I found myself a few times) 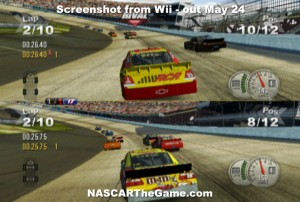 NASCAR 2011 offers many different playing abilities and styles. This may be the first Wii title that I recommend using the Wii Wheel. Besides the Wheel players can use the Gamecube controller, classic controller, or the normal Wii-mote and Nunchuk combination. The game also features a split-screen mode for some shack-and-backing. To bad the split-screen cannot be used in the games campaign mode. Being a NASCAR game the game features every track from Talladega to Texas Motor Speedway. The game also supports every NASCAR driver you can think of or at least what I could think.