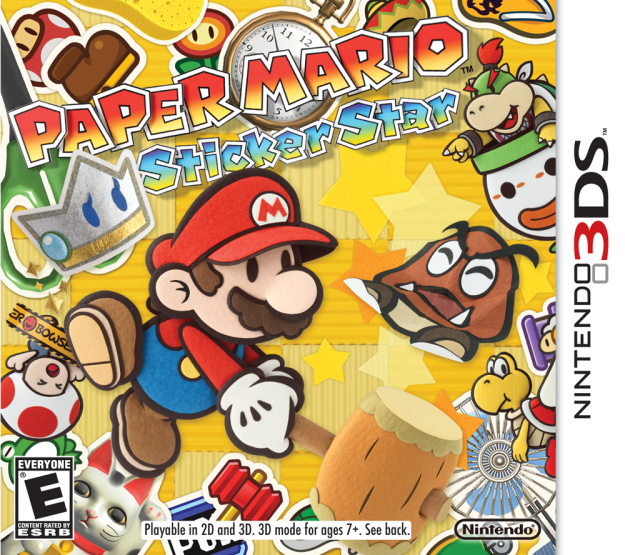 This article was written by our new contributor Jake Spafford.

Paper Mario is a fant 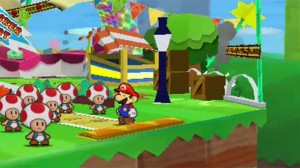 astic series.  I have fond memories of the first installment for the Nintendo 64, and I also loved the second game in the franchise, The Thousand Year Door.  These games have always been so endearing.  Unique visual style, lovable characters (even the villains), engaging plot, and witty dialogue.  The games are just…entertaining.

The newest game, Paper Mario: Sticker Star, is no exception.  It is just as charming as its predecessors.  It stays true to its heritage while still changing some things up and pushing its boundaries.  Notably, as a 3DS game, Sticker Star is the first of the series released on a handheld console, so differences are to be expected.  The major difference is alluded to in the title–that is, the sticker system.  Every attack made in the game comes from a consumable item.  Even Mario’s trademark hammer and jump attack can only be made if you have the corresponding sticker.  Stickers come in various types and strengths–mainly consisting of variations on the aforementioned hammer and jump.  There are also other staples of the Mario universe–POW blocks to stun your enemies, fire flowers for attacking multiple targets, mushrooms for healing, and even nostalgic throwbacks like the frog suit or raccoon tail.

The trick is managing your limited inventory of stickers.  You wouldn’t want to waste your precious Big Flashy Iron Jump Sticker on a goomba.  You always want tobe using a sticker just powerful enough to defeat what you’re facing so you can save your stronger stickers. 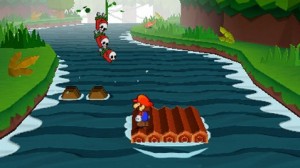 You replenish your inventory by peeling stickers off the environment or finding them, as you might expect, in ? Blocks.  It sounds exhausting, I know, and I had my doubts.  But as I played through the game, I actually found myself really enjoying the new mechanic.  I never found myself stranded without stickers, but at the same time, I always felt the need to be careful with my resources.  And it’s incredibly satisfying to find a big group of enemies and take them out all at once with that Shiny Red Shell Sticker you’ve been holding onto.

The game retains the Action Command system of the previous games.  That is, pressing A at the right time gives strength to your attacks.  Keep hitting A, and you can jump on one enemy several times in a row.  Or time your button press just right, and your hammer attack can do massive damage.  A new mechanic is the Battle Spinner (essentially a slot machine).  Pay three coins and you get the chance to try matching up symbols.  Successfully doing so grants you the opportunity to use multiple stickers in one round.  The Spinner is particularly useful in boss battles.

Okay, so there’s actually a second class of stickers.  The Thing Stickers.  These are 3-dimensional, everyday objects found in the game that are converted into stickers.  They are typically used outside of battle to advance through the overworld (like using a refrigerator to freeze the lava barring your way) or in boss battles.  Boss battles are possible but incredibly difficult and costly without 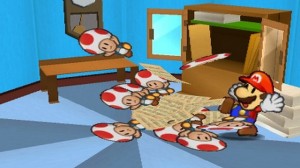 the correct Thing sticker.  In fact, the entire Thing sticker system was one area where I feel like the game fell short.  It’s an intriguing idea but could have been implemented better.  The process of finding the Things and converting them into stickers is tedious, especially when you have no way of knowing for sure if you’re even getting the right sticker.

While we’re at it, let me get another gripe out of the way.  It’s an RPG without experience points.  Which is fine, but it means there is very little incentive for fighting enemies, especially considering every battle takes away from your collection of stickers.  I quickly found myself avoiding combat wherever possible.

As far as puzzles, the game doesn’t spoon-feed you anything.  It expects a lot out of its players.  It gets pretty frustrating sometimes, but I never threw the 3DS across the room, so that’s good.  In fact, I was actually rather impressed with the depth of the puzzles, considering all you can really do is jump, hammer, and put stickers on stuff.  I also like the learning curve.  It shows rather than tells.  Instead of telling you how to interact with the environment, the game starts with you having to rescue a ton of Toads, and as you do, you learn the fundamentals you will be using to solve the other puzzles in the game.

The story isn’t all that complex, but it doesn’t need to be.  It’s a Mario game.  Bowser shows up, kidnaps Peach, and scatters a powerful object into several pieces which must be collected and put back together before you can defeat him and rescue your elusive princess.  Simple.  Effective.

All in all, Sticker Star is a great member of the Paper Mario series–it retains many elements that made me love the original while implementing a fun new system and bringing the franchise to the handheld market.  Be patient, persist through some of the more difficult puzzles, and you’ll love it.