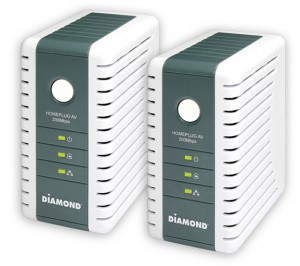 If you are anything like me you have wires going all around your house. Each morning as I make my way down the stairs I find myself tripping on an Ethernet cord that tauntingly flows down my steps. (Check video below)

When I received the Powerline Internet AV kit I was a little skeptical it would work.  As I get older I become set in my ways, afraid of change, especially if the change messes up how I think things should work.

Unlike other routers the Powerline system uses something that every home already has, electricity…what!?!? Well not really electricity but the wires that go throughout your house. Setting up the Powerline system is simple. Plug in the box into any outlet, preferable near the router, and then plug your Ethernet cable from your router to the device. Plug the other receiver into an outlet near your Internet device. For me that was my Apple Airport express. Then attach another Ethernet cable from the device to the router. That is all you have to do. By the time I got a drink of water my Airport Extreme status light was green and Internet ready. 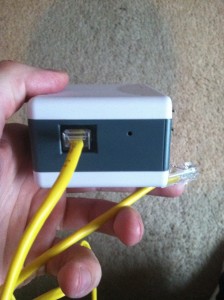 A little disclaimer before I get into this next part. I have Comcast cable that changes speeds faster than a subway train. With that said, once I finished setting up the Powerline system I saw an increase in Internet speeds. This piqued my curiosity so I switched back to my normal set up, with the Ethernet cord controlling my house, to see if the Powerline system did make a difference. To my surprise I did see a slight drop in Internet speeds once I switched back to the old setup. Once again Comcast Internet speeds change every second, so who really knows what is going on here. I then took the Powerline through some more tests of high volume downloading and it passed with flying colors. 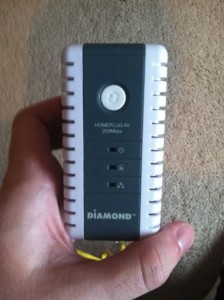 The only negative effect I saw with the Powerline was higher Ping times.  To put it simple a ping time is how long it takes to send a packet of information from one source to another. The longer the ping times the higher the risk of lost packets of information. To put it even more simple, high ping times bad. For some number’s comparison; with my normal set up my average ping time was probably around 100ms.  With the Powerline system I saw a ping time of over 300ms and nothing lower than 180ish. 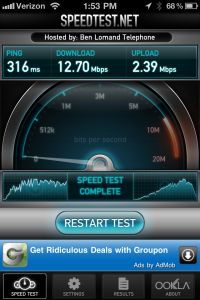 I have to say I was pretty surprised how well the Powerline system worked. Being most of my life is spent on the Internet; I am very picky about getting my Internet working at the best as it can. But yet I still have Comcast. I can safely say I will be keeping the Powerline system set up at my home. It will be nice not having to worry about tripping over the Ethernet cable as I walk down the stairs. I do not think my brain could take muchhh moooeoroeoreisoreiuroiuer.