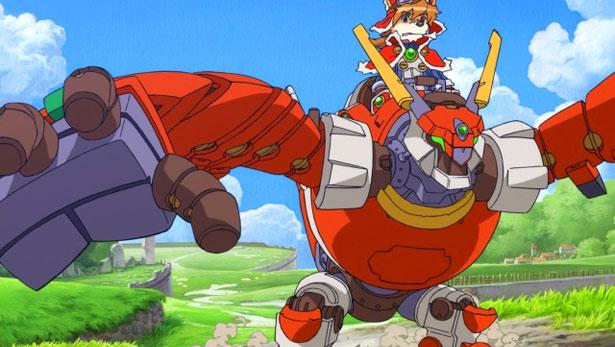 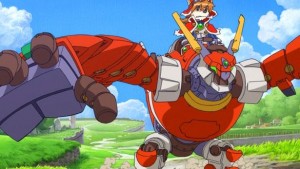 In Solatorobo: Red the Hunter you play a Fox, who thinks he is the greatest hunter to ever live. Fox lives in a world where most people seem to lose their ability to walk and work and instead ride on the back of large mechs for their living needs. Being the hero that comes across with having no clue, Red finds himself trapped in a fight to save the world from a giant monster, who he accidentally released  The game is full of dialog. Maybe even too much dialog that scrolls by way too slow. Being that Solatorobo is really catered to the Japanese market. The dialog for the game has some charm at times but mainly full of crazy nonsense.

Solatorobo is a typical action RPG, where you have battle, fighting, and upgrading systems. The battle system is very simple, a lot more simple than you may think. When you think of giant mechs you may think of giant upgradable guns, rocket launchers and machine guns. Not in Solatorobo. Being a hunter, all your mech can do is lift things and toss them. By using the A-button you can lift enemies, projectiles, basically whatever you can find, to toss around like a football. Combos can be performed by catching and re-catching tossed enemies. 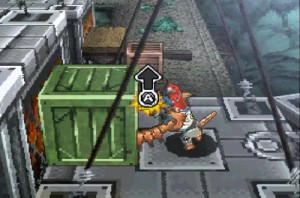 Most of the side quests have this same type of mechanic. The quests are full of lifting, searching and carrying things. The side quests are nice to gain money for upgrades, which is really too easy, I had 12,000 rings before I knew it. The real issue with upgrading is the need of finding crystals to unlock different placement holes for your mech. Near the half-way point of the game you have the ability to buy out any store, but have nowhere to put your upgrades until you find more crystals. I guess this is the developers’ way of controlling the upgrade system to make sure the player cannot become too strong too fast. To be honest the game is not very hard to call for a need to upgrade quickly.

Like all games with search quests, these mini-missions become very old fast. What becomes annoying is these missions are more important to the story than they should be. Being the game is about a hunter, it makes sense to have a “Hunter Rating.” This hunter rating is achieved by completing these side quests. Each time a quest is completed, the player receives a random amount of starts, which has nothing to do with the difficulty of the missions. After collecting 12 stars you raise a hunter level. The game is slowed down by the need to be a certain hunter level before you can advance onto the next section.

Visually Solatrobo is a stunning game. Maybe one of the top visually stunning games on the DS. The environments of floating island cities are a wonderful world to walk mechs around. Enough of me explaining the graphics, let me just show you what I mean. 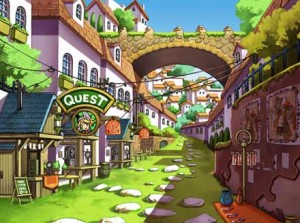 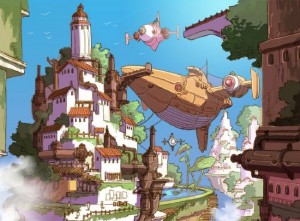 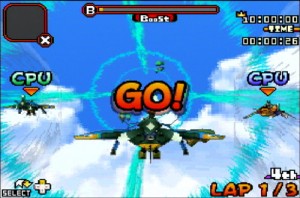 I have to say even though I found myself very annoyed by many aspects of the game, I found it hard to put down. I had fun playing through the story even though at times I wanted to punch myself in the face. Solatrobo: Red Hunter is a respectable game for possibly being one of the last adventure RPG’s on the DS. If you enjoy Japanese style games, and humor, you will really enjoy Solatrobo: Red Hunter.