I would like to preface my review by saying this is my first introduction to the Super Monkey Ball series.  I cannot compare it to the other versions starting way back in the good old Game Cube days.

For those of you who have never played a Super Monkey Ball game before, the best way to describe the game is by its title “Super Monkey Ball. “ The game is simple just a monkey in a ball. Well, ok, it’s a little more than that. The object of Super Monkey Ball is to control a monkey, of your choosing, in a ball, through a variety of puzzles, while trying to collect bananas. The object is to try to go as fast through the puzzle as you can with out falling off. There is not much penalty for falling off besides taking more time. 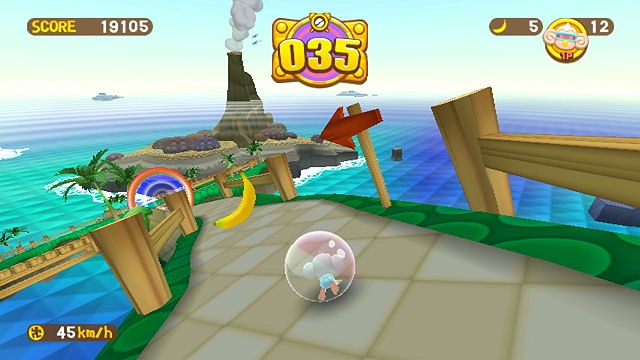 One of the things that makes this Monkey Ball different from the others is the controls. Yes the 3DS circle pad can be used to move, the weirdly excited monkey who is trapped in a ball, around or the 3DS gyroscope can be used to tilt and roll the monkey around. I found the gyroscope to work surprising well for the game.  Just a small tilt in either direction sends your monkey rolling where you want it to go. Stopping the monkey is just as easy as tilting back the 3DS. The only down fall to the gyroscope, for me, was the 3D. Because the movement of the 3DS, I found myself turning down the 3D slider to stop the flickering and headaches.

Super Monkey Ball 3DS adds a few new features to the normal Monkey Ball Puzzle game. Monkey Ball Fight is a mode were the monkeys’ break out of their balls and fight in a Smash Brothers type brawl for bananas. Each monkey has their own moves that can be used to smash out the bananas their opponents are holding. Also Monkey Race puts the monkeys in motor vehicles, which doesn’t seem safe to me, and allows them to race around a track,  with Mario Kart like actions, with items and a variety of levels. Each of these two games seem a little lackluster and something I did not find myself playing that much. The also seem to be too much of a rip-off of Brawl and Smash Brothers, and poor ones at that. 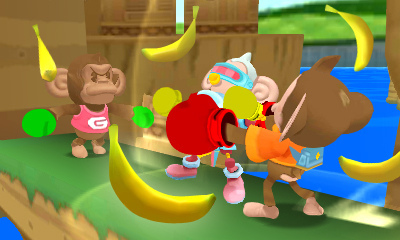 Along with the options in single player mode, Super Monkey Ball 3D offers the ability of co-op play. There are three ways that co-op can be played. You can either put your skills up against another player by passing the 3DS off , joining a local Wi-Fi game, or creating a local download game.

When talking about a 3DS game most people wonder mostly about the 3D affects. The 3D is Super Monkey Ball is the strongest part of the game. The use of the 3D adds an interesting depth to the puzzles, which would be lost with the 3D off. Even though I had to turn the 3D while using the gyroscope, the game plays a lot better with it on.

Super Monkey Ball is a nice casual title for the 3DS. If you enjoyed any other Monkey Ball games, you will enjoy this one. The 3D is a nice addition to the series but the Monkey Race and Monkey Fight are the weakest points. The game is only 80 levels long, with each having a 60 second time frame.  This makes the game pretty short but the use of co-op play adds a little replay value. Who doesn’t like good completion? Super Monkey Ball is not a must buy but I could be a good game to tie you over until…lets say…Zelda comes out. (June 19th)