Editor’s note: I would really like to thank Jesse for his willingness to help out with this review. I am hoping we will hear more from Jesse as time goes on. I hope you enjoy his review as much as I did. I will let Jesse introduce himself.

When I was asked to write my first video game review, I was excited. I have worked in the video game industry for several years and I thought it might be a fun opportunity to be writing a review for a change. I have worked as a technical artist on several IPs, including several titles for 2K Sports. Before they were purchased by Take Two, they were owned by Sega, so in a small way, I see Virtua Tennis as a sibling or cousin to the games I used to work on for 2K.

Now that you know some of my past history with video games, in particular, sports games, I have a confession; I am not a sports enthusiast. Oh, I like to be active with biking, going to the gym, etc. But when it comes to sports, let’s just say I’m good at every sport that doesn’t involve a ball. And when it comes to video game sports, I must say, I really don’t get into them–it’s probably a good thing I was an artist at 2k and not responsible for game play. As for my perspective is concerned, I have a good idea of how a sports game should look and feel but the real trick for Sega will be keeping my attention. 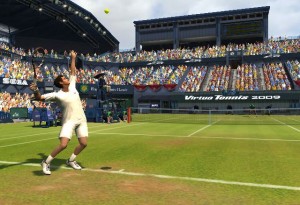 I fired up the game and jumped straight into exhibition mode. I didn’t need to practice–this was tennis–how hard could it be? After designing my character, I found myself on a world tour with a game-board style setup as my character crossed the continents in search of tennis glory. At first, the pacing seemed a little strange, I didn’t understand the movement system, star points, kits, clubs, etc. And in fact, this was my experience for the first little while, I felt lost. I played a few tennis-style mini-games, signed some autographs, but when I finally played my first real match, I got creamed. I was surprised, because in the mini-games, my first assessment was way too easy; It seemed as though I could be quite far from the ball and hit my “2” button and still hit the ball with no problem; why was it so much harder in a match?

I consulted the flimsy manual and read about the different buttons, 2,1,B,A which represented top-spin, slice, lob and power move, respectively. Now I was getting somewhere, I rationalized, not only was I learning how to play the game, but now I was learning about the actual game of tennis. Two birds, one stone. I felt ready to play. 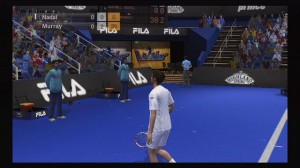 This experience, up to this point, reminds me of my first real-world encounter with Tennis. I took a girl out to the Tennis courts and she taught me the basics, how to hold the racket, where to stand, how to swing, I was ready to go, and when the ball first came into my court, I SLAMMED it as hard as I could…over the fence. No problem, she said as she patiently served me ball after ball which I completely obliterated with powerful slices. Ten years later, I married that girl; it’s a good thing she liked me in spite of my Tennis abilities. But memories of that awful game came trickling back as I played Virtua Tennis 4; I heard her behind me, chuckling at my frustrations as player after player creamed me on the virtual court.

In Virtua Tennis 4, my problem was the same as it was in real life–too much power–a lack of subtlety. I knew if I was going to get anywhere with this game I was going to have to figure out how to be subtle. I found, buried in the flimsy paper manual, a link to the online manual. After some study of said online manual, I found myself much better equipped. I played another match and promptly got creamed. Raar! What was I doing wrong?! Back to basics. I quit exhibition mode and went back to the main menu where I entered practice mode. After a few rounds of practice I learned about finding my position and hitting the button early. Timing and positioning were the secret to returning shots powerfully. I jumped back into exhibition mode to put my new-found knowledge to the test and successfully won my first match! 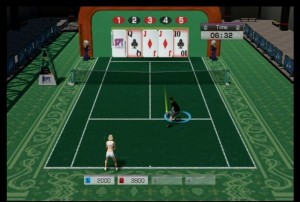 Sadly, I had missed my first major tournament because I didn’t have enough stars. So I had to continue on from Asia to Melbourne, Australia. I missed being picked up for the tournament so I had to enter a qualifying round, which I did pretty well in. I didn’t win the tourney, but I did come away with a newfound respect for the subtleties involved with the gameplay. After the tourney, I started getting fan mail and winning more tournaments; I started winning more mini-games, signing more autographs, carefully purchasing move tickets, ticket swaps, massages. Meanwhile my star power was increasing and I was moving up in the ranks. I was actually having fun! One evening, after telling my Tennis-player wife that I was only going to spend twenty minutes on the game, I found her pulling me away two hours later; I was hooked. Sega had successfully garnered my attention.

So, now that I’ve established that this game is pretty fun, let’s talk about the things that diminished my experience (beyond my poor start.) For starters, the graphics are just okay; the character setup and character models are weird, creepy even. My wife kept joking how my avatar had “no shape” while I held that he had a shape alright and that it was a scary one indeed. I found the animations to be unpolished, shakey; that mocap needed a loving animators hand to make it move realistically, or at least reduce the shakiness. Sometimes, in gameplay or replays, it looked like the character’s raquet didn’t even connect with the ball; Come on, are real-time ik really so hard? Not only that, but the animations were also repetitive; I must have seen my avatar fist-bump his partner 1000 times. Don’t even get me started on the repetitive voice-over grunts, gasps, etc. 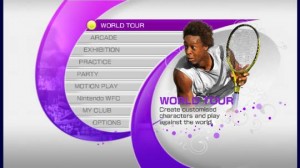 The overall presentation was another disappointment. The purple on white menu system was a little garrish for my tastes and I found it distracting. The load times were pokey when transitioning and downright slow when loading other players; sometimes I wondered if instead of AI characters it was out hunting the web for other human-controlled opponents. Why did it take so long? The map system also held some minor annoyances, forcing me to switch modes to know which tiles on the board meant what, and employing a very sticky reticle which liked to cling to mappoints instead of gracefully flowing from point to point. And finally, the font design and intro song seemed out of place in a Tennis game, a quick look on the forums proved that others felt the same. These were not deal-breakers but they made the experience feel a little unrefined. And did I mention, I played the first person wii-motion-plus game and although it wasn’t perfect, it was really fun; I sort of wished the whole game had been made in this style…well, maybe.

For me, in spite of some of the visual flaws, the game was fun and addictive. I found myself caught up in the sports drama of a rising start (me) as I obsessively tried to improve my rank and fan-base. The board-game exhibition is surprisingly fun and rewarding. So take it from a sporting-world outsider, this game is very fun. There, I said it; I enjoyed it. 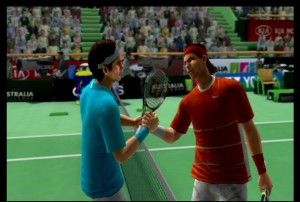 Now that I’ve told you so much about me, I am required to also tell you that I have also polished my real-world Tennis skills since marrying that pretty Tennis girl from years ago. I’m not a tennis legend (after all, this is a sport that involves a ball) but I do okay. In the end, I can honestly say that I have a good time playing Tennis in spite of the fact that on rare occasions, I still hit the ball over the fence.

If you’re looking for a good sports game, or just a good game in general, Virtua Tennis 4, fits the bill. Its unique exhibition mode and varied game play make the game genuinely fun. And if you can get this non-sports-fanatic’s attention with your sports game, that’s saying something.