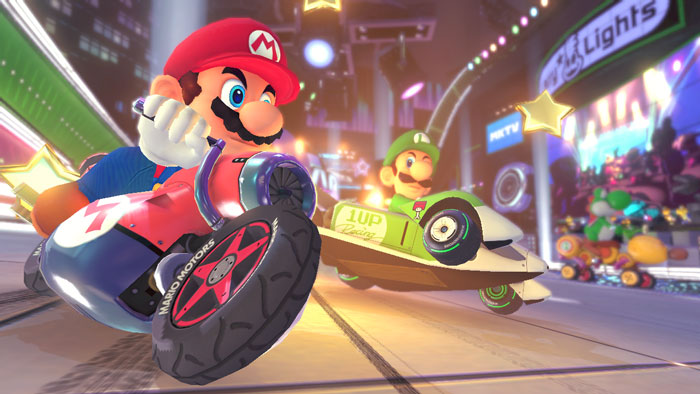 Welcome to the first in an 8-part series to celebrate the launch of the latest in Nintendo’s popular Mario Kart games, Mario Kart 8 on the Wii U. Each week leading up to the May 30 launch we’ll post a special feature about Mario Kart, from its history, character rosters and diverse items to racing techniques.

So let’s drop the checkered flag on our first feature. Today we’re going to look at the race that stops the Mushroom Kingdom with a short history lesson and a wrap-up of our favorite Mario Kart titles. 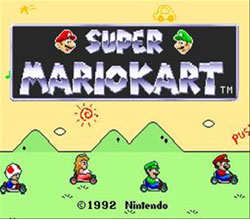 If you were the proud owner of a Super Nintendo (SNES) in the early 90s, chances are you played Super Mario Kart. It was the 3rd best-selling title on the system, with a tidy 8 million copies sold. This little game came out of nowhere to firmly cement Mario into our hearts in an entirely different way to his usual platforming adventures.

The thing that made this game – and series – stand apart from other titles was that it blended Mario’s instantly-recognizable world of mushrooms and koopas with a fun and accessible racing game, which was also challenging and hugely addictive. The balance between Mario-ness and driving techniques was spot-on, as was the difficulty level and track design.

Tracks were fast and fun, with many shortcuts to discover and a best times leaderboard, which encouraged players to come back for more. The game eased new players into the race with its class system, starting with the slower 50cc class before moving on to more challenging speeds in 100cc and 150cc. In this way, even players from different disciplines could enjoy the game, and with further experience, could become experts. Who can forget mastering their first power-slide?

The series has been around for over 20 years. As the cryptic title suggests, Mario Kart 8 is indeed the 8th iteration, with one title being released on each Nintendo console since the SNES. Let’s look at the timeline of releases:

Nintendo conveniently released an infographic yesterday which perfectly illustrates each of the Mario Kart titles. You can check it out below or click on the image to see a larger version. 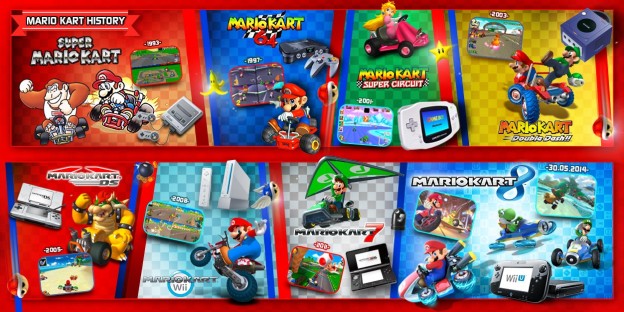 Have you played every one of these Mario Kart games? Are there any that you’ve missed out on? Be sure to let us know in the comments section below.

With 7 classic titles to choose from, it’s difficult to choose a favourite, which is why we collectively gathered our wisdom around the virtual Pure Nintendo office to come up with the top 5 Mario Kart titles, as voted by Pure Nintendo staff. 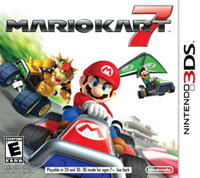 The latest entry in the series is, not surprisingly, the most polished, and our favourite. It is pure fun, and perfect for a handheld device. New driving features include gliders and underwater karts, with speed and handling changing as you move from land to sea or air. Ghost data can be swapped via SpotPass for added competitiveness and karts are completely customizable, with many unlockable tires, gliders and bodies, all with varying effects on speed and handling. The 3D graphics are beautiful and the online mode is terrific, allowing you to play with racers all over the world. Only time will tell if Mario Kart 8 can live up to this gem. 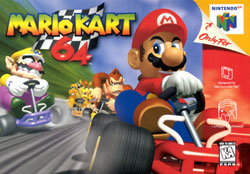 The second game in the series introduced 4-player support, with stunning polygon-based 3D graphics for track design, though characters remained 2D. The 3D allowed for enhancements over the mode 7 graphics of the original title, introducing changes in elevation, bridges, walls and pits. It sold over 9 million copies worldwide. It also saw the introduction of the blue spiny shell, perhaps one of the most controversial items of any Mario Kart game. 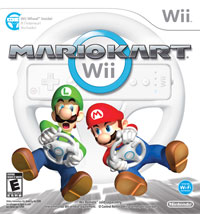 Selling well over 30 million copies worldwide, its not surprising that this best-seller also made our list. Mario Kart Wii was released in 2008 and basically made the already-successful series a household name. This title was bigger and better than its predecessors in many ways – a whopping 12 karts on each course at once, continuing online capabilities from the DS version, the addition of bikes and stunts, well-designed new courses, new items like the pow block, thunder cloud and mega mushroom. And of course the inclusion of a steering wheel, enhancing your driving experience with motion-captured controls, for which the Wii was made famous. 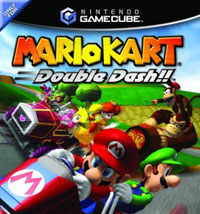 This game is unique among its siblings, with a twist that allows the selection of two drivers per kart, one to drive and one to use items. With 20 unique characters that can be combined in any way, there are a staggering 190 possible combinations. This added a completely new dimension of variety in terms of items, speeds and compatibility. With new drivers to unlock, and new items specific to a character, the possible combinations gave the series a fresh feel. It also introduced the Mirror Mode that we all know and love (right?), which has featured on every title since.

The game that started it all. What began as a spin-off for Mario and his pals turned into an incredibly fun and addictively competitive series. A driving game that anyone could play – yet mastering it was difficult. Who had ever thought it possible to drive through Bowser’s lair? Or a Boo house? And we don’t know where Rainbow Road came from, but it was either a stroke of genius or complete insanity. Power slides, red shells, beautiful Mode 7 graphics on a 16-bit machine – this game had it all. It set the scene for years to come, evident not only by the Mario Kart sequels themselves, but by the many kart-racing clones that spawned after this release.

So which is your favorite Mario Kart title? Let us know if you agree or think we’ve missed an important entry in our list.

We could go on, and on (and on) about the series … oh, and we will, next week actually. So stay tuned for a closer look at Mario Kart’s character rosters over the years, including our favorites, some obscure ones you might have missed or forgotten about, and our speculations on Mario Kart 8.