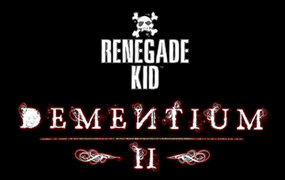 I had the honor of interviewing Jools Watsham, Co-owner, and art director at Renegade Kid. We talk about everything from their upcoming title Dementium 2 to the newly announced Nintendo 3DS.

Editors Note: The interview was done over skype call, answers may not be word for word from Jools.

Q: Where did the name for Renegade Kid Come From?

A: We wanted a combination of something edgy and playful. Renegade is a great word and rebellious one, and kid is more of a playful thing.

Q: Tell us a little about dementium II?

A: Dementium II is really different in every way. Its great to make a sequel to a game we made in the first placee. Big difference is the visual verity, from the hospital, like in the first one , to a snowy environment. Dementium: The Ward had the same environment, the hospital, we wanted to get away from this in Dementium II. So we added different environments, enemies, weapons. Variety is the big thing we went for. Unlike the first game, you can now jump and crouch and destroy things that  are around in the environment, with some of the weapons. I am really happy with it, no regrets at all. It was a smooth project to work on, and we had fun and squeezed as much in as possible.

Q: How did you accomplish what you needed on the DS?  Any limitations you ran into with the DS?

A: Ummm, no we knew it was going to be on the DS. The basic concept wouldn’t change at all if we had developed it for a different platform; story, enemies and things like that. FPS goes great with the touch screen for the DS. More like a mouse, with the touch screen, then a joystiq. Surprised by how much we can squeeze out from the DS.

Q: Do you think there is a better audience for M-Rated games on the DS then the Wii?’

A: Yes, I think there is a larger audience for M rated games on the DS than the Wii. Wii sits in the living rooms for the families to play. With the DS, it’s your own private experience, you can plug in your headphones and go off by yourself. I have a Wii at home with family friendly games, and my 360 is in the office, were I play the other games.

Q: Would you ever consider making a Wii version of Dementium? I think it would work very well.

A: We would develop Dementium for the Wii, if someone gives us the money (laughs).

We would love too. We took Dementium: The Ward and added on high-resolution textures and lighting. It looked great. The market is just not there for M-rated games. The same could be said about T-rated games too.

We did pitch it to gamecock when we finished with Dementium: The Ward. No it’s not going to happen.

Q: What do you think of the Nintendo 3ds?

A: It’s going to be awesome. I am really looking forward to it, the ultimate handheld. What I heard, from sources, its basically a game cube with rumble and stuff.

I am a big fan of the DSiware shop, and excited for the 2nd generation of what that will be. Just imagining it on the 3ds, to walk around and be able to down load a game for 200 to 1500 points is a great thing.

Just as a player I am excited for it. Nintendo make the best handhelds.

Q: What games have you been playing?

Wii.- Mario Galaxy – got all the stars twice, with Luigi too.

New Mario Brothers Wii –  got all the coins except for 2 in the rainbow world.

Q: Tell me about those scary post cards we have been receiving to promote the game. It really did scare me at first.

A: (Laughs) I have to say South Peaks PR team really did a good job, especially Aubrey Norris. The post cards go with the game. William (the main character) will find these cards throughout the game.

Q: Why should our readers go out and play this game, besides it being super awesome?

If you played Dementium: The Ward  then there is no reason for you not to buy it. It is better in every way, or Moon in that fact. If you haven’t played any of those games, we tried to give the DS answer to half-life or bio shock. Story, environments, dialog, cinematics, its pretty unique for the DS.

Also if you don’t like blood or violence, then you will not like Dementium 2. Its not over-the top gore, or over the top gross or scary. It’s a solid adventure game with blood and violence.

And it is awesome! (laughs)