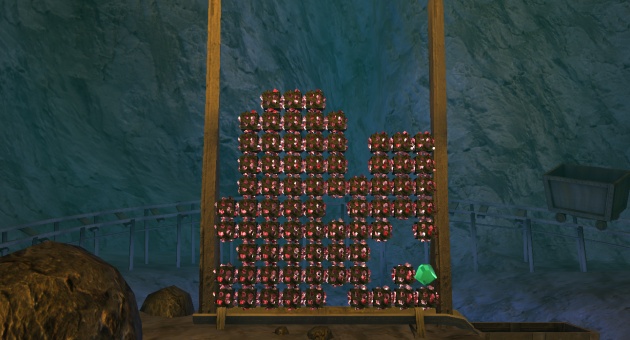 Puzzle Game With a Twist: Gemology Coming to Wii U eShop

Well the indie scene on the Wii U continues to flourish, with yet another interesting new title set to make it’s way to the Wii U eShop this year.

Gemology sounds like a particularly novel take on the puzzle genre by favouring patience and good timing over the traditional rapid thinking and quick movements. So rather than commanding falling pieces (in this case, rocks and gems), the player guides them as rocks cave in around them.

This is the debut for BNC Design Studios, the developer behind Gemology, and the company’s founder Jake Taylor had this to say about the game:

In the first release of Gemology there will be two primary game modes, tentatively referred to as 1 and 2. The first sees pre-made levels arranged of stone with small glistening gems protruding from each side. The player’s objective is to remove all of said stones from the room by filling in each row with gems.The catch? The player does not control the gems nor any other object. Gems appear on stage through rocks that periodically ‘cave in’. By tapping on the rocks with the GamePad’s stylus the rock breaks and the gems appear and fall according to natural laws of physics (plus or minus a few adjustments). Unlike traditional puzzles which rely on rapid thinking and quick movements, Gemology instead favours patience and good timing. Instead of commanding the rocks and gems, the player guides them.

The second mode is more simple and geared towards a more casual experience. The playing field attached with the two pillars is filled about 2/3 of the way up with gems of all different shapes and sizes. These gems are slowly but surely falling into a pool of lava and the more gems that make it in, the higher the lava rises. The objective here is to tap a gem and drag it over to another gem of the same colour, thereby fusing the two. This can be done infinitely but at the risk of allowing more gems into the pool. There is no way to lower the lava and as your score increases so does the gems’ speed of descent into the lava. Shoot for a high score and repeat. More gems appear on screen again through rocks that periodically ‘cave-in’ and can be obtained by again tapping on the rocks and breaking them apart.

There are plans for extensive DLC including an online multiplayer of the latter game mode including a handful of fun attack methods to use on your opponent, a stage builder as well as leaderboards, Mii usage and other fun little details.

Let us know in the comments section if you’re looking froward to testing your skills with this new puzzler.