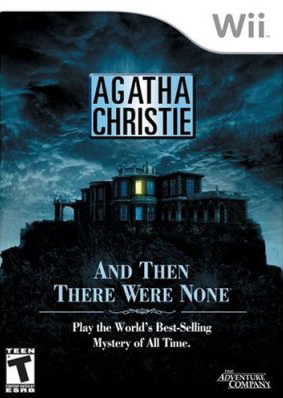 Reader Wiiview: Agatha Christie and Then There Were None 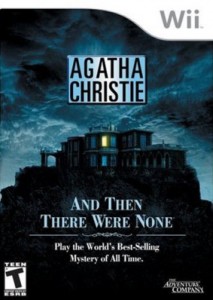 Thanks to Sagatron for sending in his review for Agatha Christie!  Remember, any reviews you have for games, just drop them in an email to tips at purenintendo.com and we’ll be sure to post it!

This game is a one-player point-and-click murder mystery based on the Agatha Christie’s novel by the same name. If you’re a fan of Agatha’s storytelling and have read the novel first published back in 1939, you might be asking yourself why you would want to play this game when you already know the ending. Well good news, the ending for this game is different than the book. For all of us that have not read the book (myself included), what is the point of changing the ending? To me, this seems disrespectful to Agatha’s work. However, if you finish the game, a surprise awaits for those that don’t know the original story.

The graphics of this game are something that we all have seen before, about ten years ago. The character models are blocky and pixilated and the animation of their movement looks stiff and awkward. Cut scenes are even worst with little detail on the characters and reminded me of those old Japanese kung fu movies where the English dialog was dubbed over and you see the characters mouths move but not to what was being said. The in-game text is small and hard to read if you aren’t sitting close enough to your TV. One good element of the graphics is the environment. A lot of detail was put into making the objects and landscape of the game look authentic and realistic to the times. 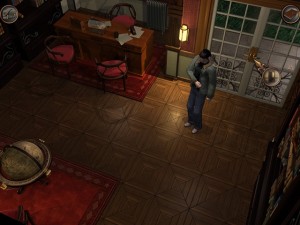 The music is well done with a score that both gave a mysterious tone to the game as well as provided a subtle background ambiance, but it did get repetitive. On par with the music is the great voice acting. All of the voices are original for each character and really brought the feel of old British atmosphere back to life. Almost everything is voice acted, except for various manuscripts that get scribed into your journal, which is rare to hear these days in games. Sound effects consisting of everything from footsteps, to rain, to opening desk drawers are all done very well.

Being a PC port, the point-and-click interface works really well on the Wii. Pointing at the screen with the wiimote gives you a cursor arrow that allows you to move your protagonist around by click on the static background or clicking on items to have them automatically put into your inventory. Some motion controls were added like moving the wiimote up and down to control a shake mixer or using movement to make a scoop work. The most annoying of the controls is the twisting of the controller to open doors (and there are a lot of them). Sometimes it worked, other times you will have to repeat the motion two or three more time for it to actually recognized that you want to open the door. Through my experience, it works best if you make a slow twisting motion rather than a fast one. 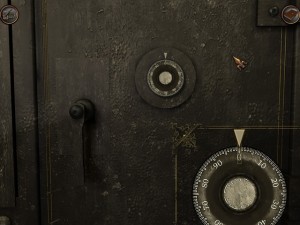 You and ten other guests are brought to a secluded island in which a recorded message reveals that you all share a similar secret. The mysterious host begins to systematically dispose of each cast member one-by-one using a nursery rhyme to build tension in the air as to who will be the next victim. Your mission is to search out clues by talking with other guests, finding items in and around the mansion, and solving puzzles to help you uncover the killer. Doing so can be a tough task throughout portions of the game due to illogical placement and combinations of items. The lack of detailed map of the rooms in the mansion makes fetch quests difficult because you don’t know which rooms are being occupied by which guests. The story does keep you engaged throughout the game as you try to pick up any clues from the dialog and various documents you will find. You can save your progress at anytime during your adventure however an overwrite feature was not included making the player use another save slot, or delete your previously saved game in order to save the current game. 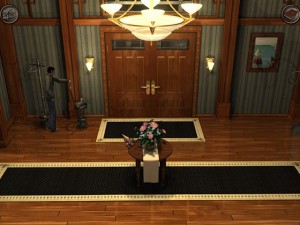 The game will take anywhere from 10 to 20 hours to complete and even shorter if you use online walkthroughs to help locate those hard-to-find items. One of the most disappointing aspects of the game is that there is little to no replay after you have finished the game. The game will not progress unless you have the right items needed to get to the next Chapter so there will be no need to go back through to search for anything else once you have reached the end of the story. There are a few alternate endings to the game however these can be completed fairly easily if you have a saved game before the final sequences of Chapter 10.

Being one of the first point-and-click mystery games to arrive on the Wii it does a valiant effort to entice the player to become involved in solving the murders. That effort does fall short in terms of dated graphics, lack of great gameplay, and virtually no replayability. The game does have outstanding voice acting and storytelling appeal combined with a slow-paced adventure with simple controls. Overall the game is fairly disappointing as it could have been a lot better. I recommend passing on this title if you are not into story driven sleuthing adventures, but if you are then this game is only worth a rent.