Well, its that time… after numerous datamines and leaks, Realm Royale has arrived on Nintendo Switch. Realm Royale is a free to play battle royale game set in the Paladins universe, though, at this time it is only accessible on the system through purchasing the Founder’s Pack on the Eshop for $14.99.

No time has been announced as to when Realm Royale will be released to all for free, but if Paladins and Smite are any indicators, it will be sometime within 1-3 months. 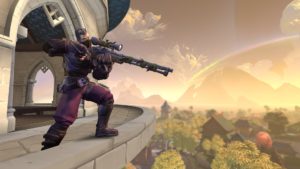 Here’s an overview of Realm Royale, along with a trailer, for those who might be unaware of this particular battle royale game:

Can you defeat up to 99 players to claim the Crown Royale in this hit fantasy Battle Royale?

Choose a class. Forge your legend.
Choose a class, then loot deadly weapons and powerful abilities to customize your playstyle and dominate the battlefield. Soar through the skies as a Mage, or perfect your accuracy as the Hunter. Flank the enemy with the stealthy Ghost Walk as an Assassin, or jump head-on into battle as the Warrior with the Heroic Leap!

The Ultimate Team Royale
Call your friends: It’s time to squad up. Help your team by dropping a Healing Totem during a firefight, or fire a Flare into the sky to reveal incoming enemies. Build a team from four unique classes and work together to earn the coveted Crown Royale!

Wield Awesome Abilities
Throw out a Concussion Bomb to knock enemies into your line of fire, or summon an Ice Wall to take cover. Make a stealthy approach with a Smoke Screen, or search for nearby enemies with a Sensor Drone. Find your favorite abilities scattered across the Realm, and outplay your opponents.

Forge Legendary Weapons
Go traditional with shotguns and snipers, or embrace the fantasy with swords and crossbows. If you want to win, you’ll need to craft Legendary Weapons at Forges scattered across the Realm. But be careful: Using the Forge will alert enemies of your presence!

Mount Up. Explore the Realm.
Journey through snow-swept vistas, castle keeps, and fungal jungles. The best part: you can summon your mount at any time to outrun the fog and ride to your next battle!

Live to Fight Another Day
Losing a fight doesn’t mean it’s all over. Fall to zero health and you’ll be turned into a chicken! Survive long enough as a chicken and you’ll return to human form, giving you an opportunity to turn the tables on your opponents!

Will Realm Royale make me stop playing Fortnite? Probably not… but that is not to say its a bad game or doesn’t deserve a player base. In fact, I absolutely love Paladins, and this is in its universe. The ability to play one of my favorite genres, on the best console on the market right now, set in a universe I’m familiar with, is amazing. There are a bunch of other free to play titles, such as Warframe, Fortnite, and DC Universe Online, that I’d rather play, but this one will at least occupy a good amount of my time and make some people really happy. Will you be picking up the founder’s pack, or will you wait for the game to be available for free on Nintendo Switch? As with most games on Nintendo Switch, we will be reviewing Realm Royale, so stay tuned to the site if you are on the fence about purchasing this one.