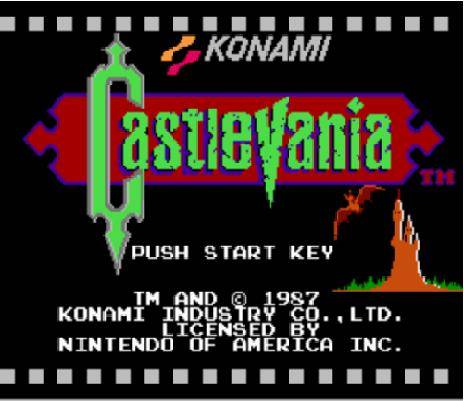 Is it just me? Or are some video games today a little too easy? I mean, yeah you can bump up a games difficulty by selecting a harder mode in either the beginning of the game or in some cases the middle. While the option is nice, sometimes I prefer a game that can really test out my gaming chops. Now I wouldn’t go as far as saying I’m a hardcore gamer, as in I play games to become a master. I play games for the shear enjoyment of playing them.

But whenever I desire these gaming challenges, I look to the older generation of Nintendo. I’m talking back in the NES era, where games were designed to be difficult, the idea of looking for an “easy mode” was non-existent and the Konami code was recited by heart. Granted these old school games were difficult, they were not impossible to beat. These incredibly difficult games soon held the title of “NES hard” and they are not far from the truth. The NES game in question is Castlevania. A franchise that to this day is still going strong.

The Night Is Still Young!

The story of Castlevania is really simple. You take on the role of Simon Belmont, a vampire hunter from the famed Belmont clan. Turns out, Dracula is stirring up trouble in Transylvania and its up to you to stop him.

So there’s the plot…yup that’s it. No overdrawn story. Just you off to kill Dracula. Now I’m a gamer that loves a good story, but there are times where a good simple goal like this is much welcomed. For some quick clarification, the name “Castlevania” is the name of Dracula’s castle. Hmmmm…Transylvania…Castlevania. Kinda rolls off the tongue.

Along with a simple story, come simple controls. You have your A button to jump, B button to attack and your D-pad to move around. Simplicity at its finest. Simon is armed with the legendary whip “Vampire Killer” as his go to weapon. Throughout each level you can upgrade the whip to a chain flail for extra damage and extended reach.

Along each level, you have the chance to find sub weapons that can help you throughout your game. Each use of a sub weapon consumes a certain amount of hearts that can be collected by killing enemies or destroying candles. When I first played Castlevania this really confused me, as I was accustomed to hearts restoring health. In this game they are used as ammo for your sub weapons. Your overall health can only be replenished by either completing a level or finding the hidden wall chicken. Not sure why Dracula keeps hidden plates of chicken in the walls of his castle, but who could say no to a free meal! 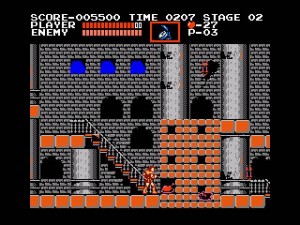 There are a variety of sub weapons that can make your adventure a little more bearable. There’s the dagger which lets you, well throw a dagger across the screen. This is by far the weakest of the sub weapons and my least favorite. The axe is an arching weapon that can come in handy if used properly. Stopwatches allow you to briefly stop time to get through obstacles with ease; this however consumes the most hearts. The cross has a boomerang effect as it travels across the screen and comes back to you. This has been speculated as one of the best sub weapons of the game, but for me that title belongs to the holy water. When thrown, these little jars of holy water can stop enemies dead in their tracks and can continuously deal damage. Using the holy water on bosses can be the cheapest way to defeat them, but this game had it coming when it decided to be so difficult! 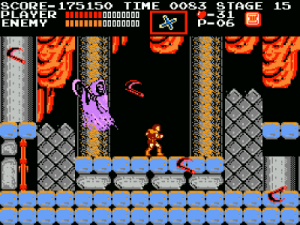 So you have your trusty whip, a plethora of sub weapons and wall chicken if you know where to look. But can all of this really be enough to help you in your quest to defeat the lord of the vampires?…do you want me to sugar coat it or be brutally honest?

WHAT DO YOU MEAN THERE’S NO EASY MODE?!?!

Ok, I’ll be brutally honest. Even with all of these sub-weapons and whip upgrades, you BARELY stand a chance for the trials ahead. The first section of the castle is cake. It gets you familiar with the controls and how defeat enemies. DO NOT let this go to your head! There have been many times while playing Castlevania where I have died due to my own hubris. Even the smallest of enemies can be your downfall. Take the bat for example. All it takes is one hit, one conveniently placed pit and BAM, you’ll hear that “you’re dead” jingle while the game mocks you for your mistake. Come to think of it, this game mocks you from the second you hit the start button.

Let me break down how Simon maneuvers throughout the game. Simon’s movement is very stiff. He has this “vampire slayer swag strut” when he moves from left to right that can be quite slow. His jump can get you in and out of danger, if you know how to use it properly. It’s all in the timing  Your jump arcs are permanent the second a forward jump is executed. You have no control of your trajectory and if you get hit while in midair? Lets just hope that there is a platform right behind you. Whenever you take damage, whether its midair or on the ground, you will be knocked back a short distance and this can be frustrating. Not only can this slow down your progress, but it can end your game very quickly. This has happened to me more than I would like to admit. Other than boss battles, being knocked back into a pit has been the bane of my gameplay.

Ok so I take that back. I’ve died from pretty much everything in this game. As you continue to climb Dracula’s castle, the baddies will dish out more damage. While in the beginning of the game you’ll only lose two bars of health when taking damage, near the end, even one of the weakest of enemies will take off a quarter of your health only allowing you to be hit up to four times.

If there is one thing that Castlevania wants you to do, is to learn from your mistakes. This game can be very unforgiving at times to the point where beating it seems impossible. Enemies are placed at unfair locations, you’ll lose that one good sub weapon, or as previously mentioned, get knocked back into a pit. 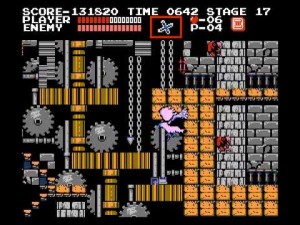 And you know what?…I love it. I love how difficult this game is.

There is a certain level of difficulty when it comes to video games. There are the games that are so difficult, they are just impossible to finish. I’m looking at you Battletoads! Then there are games that are difficult, but beatable. Castlevania is one of those games. So difficult that finishing it becomes personal. Deep down you know you can finish it. You know that you can go that extra gaming mile and save the day! And seeing as though this is a game from the 80’s, a good old fashion 80’s montage to get you pumped up wouldn’t hurt.

Castlevania really tested the limits of the NES in terms of both its music and its overall presentation. When you first start out, you are introduced to the song “Vampire Killer”. This song would be the staple in the Castlevania franchise, as it would make musical appearances in future Castlevania titles. Go to YouTube and check it out sometime. It’s about as catchy as the theme from Super Mario Bros. But that’s just the theme for the first level. Each level has their specific song to accompany your situation and just add to the overall atmosphere. No song seemed overdrawn or repetitive.

In terms of presentation, this game is quite pretty to look at for an 8 bit title. The colors are vibrant and each mesh well together adding great ambiance to your surroundings. Whether you’re in a cave, climbing a clock tower, or in an abandoned laboratory the attention to detail is very impressive and reminds you that you are in Dracula’s castle. One instance that really stood out to me was the background in stage nine, that clearly shows you Dracula’s lair off in the distance. This reminded me that Castlevania was huge and I still had a long way to get to my goal. 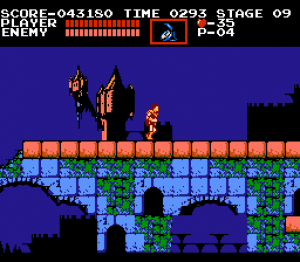 I know that a good chunk of this review has been about how difficult Castlevania is. And I wont lie to you; it is quite the difficult game. But it is beatable. I did a speed run of this game for this review and finished at 35:30:9’. Why that does make it seem like this game is short, I was playing bits and pieces of it over and over before said speed run. Each time I played, I was able to anticipate what was to come and react accordingly. Practice makes perfect!

The personal satisfaction of beating that one boss that’s been giving you trouble or getting through that one level without taking damage and applying what you’ve learned is indescribable. If you’re looking for a good challenge and a game that makes you really work for it’s ending, then I highly recommend this title. Castlevania can be downloaded via the Virtual Console on both the Wii and the 3DS. I’ll finish this review with this in mind. While the game is difficult and offers no easy mode, it at least gives you unlimited continues. That’s gotta count for something right?

Photo Credit in order of appearance: