Duck Tales was a cartoon that originated in the late 80’s, and proved to be a very big success. This success carried over into the early 90’s, thanks to the extremely popular lineup of cartoons known as The Disney Afternoon.  But for gamers, as good as the cartoon was, it’s the Duck Tales video game from Capcom for the Nintendo Entertainment System that’s most fondly remembered.  With the remastered version of the game garnering headlines, let’s take a look back at the original classic.

A platformer that puts you on a quest to find the “Five Lost Treasures” scattered throughout the world, Duck Tales uses its adventurous plot to build some unique and entertaining levels.  Each one is cleverly laid out, and rather than simply scrolling left and right like the bulk of platformers of the time, Duck Tales levels usually scroll vertically as well, encouraging (and rewarding) exploration.  Branching paths allow you to find many hidden areas, filled with valuable treasures and helpful bonuses.  You can still rush through each one, trying to get to the boss as quickly as possible, but it’s much more fun to take your time and explore . 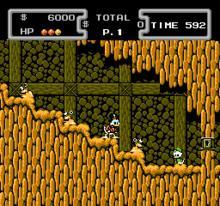 Each level will have you changing your style of play also.  The Himalayas for instance are tricky, with snow preventing you from pogo jumping with your cane and the slippery ice forcing you to move slower.  Transylvania meanwhile is more maze like, making you concentrate on not getting lost.  Additionally certain levels, like the African Mines  and the Moon, require you find specific items before being allowed to advance.   Each level is short enough to prevent the need for password or battery backup, but fun enough that you’ll want to replay them over and over.  The fact that Capcom lets you select the order to play them (like their Mega Man games) is icing on the cake.

Duck Tales is quite faithful to its source material.  Besides Scrooge as the main character, the game also features his nephews Huey, Dewey and Louie.  Plenty of friends are also along for the adventure, such as Mrs. Beakly who makes an appearance to assist Scrooge with energy restoring treats, as well as her granddaughter Webbigail.  Launchpad appears in every level offering to fly you back to Duckburg (and perhaps a bonus stage!), and Bubba and Gizmo-Duck make cameos too.  There are familiar enemies as well.  The Beagle Boys frequently show up, ‘Number One Dime’ chasing Magica is a boss character.  These are a real treat for fans of the show, and add a good deal of charm to an already strong game. 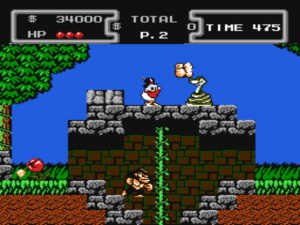 Capcom was well known for pushing very attractive, bright, and colorful graphics in their NES cartridges. Duck Tales is a strong representation of their commitment to visual excellence.  Whether it’s the bright snow covered peaks in ice encrusted Himalayan level, or the colorful jungles and Incan ruins of the Amazon, this is a game that looks very good.  Additionally, it benefits by having a bunch of nice details and character animations (certain enemies especially have highly amusing animations when defeated)   It reflects a level of polish that many NES third party games were simply lacking.  These are high quality cartoon visuals, that still manage to hold up quite well, and they are a good representation of the best of the 8 bit era.   There is some slowdown and flicker, which is not uncommon even among the best NES games, but don’t let this hardware fault blind you to what truly is a superb looking game.

The music in Duck Tales is routinely cited among the best ever heard in NES games, with the moon track in particular being a favorite.  Really, every  single track in the game is great, from the iconic main theme, all the way to the boss music, and victory tune.  The level music is fantastic, and each selection seems to fit the lands and themes beautifully. Everything is instantly catchy, and the memorable tunes make a lasting impact.  Even though the NES music chip wasn’t especially strong, Duck Tales managed to produce some truly amazing tracks! 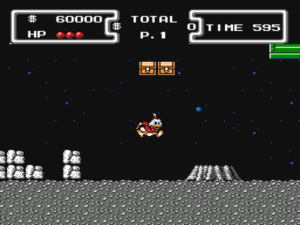 Control in the game is good, and old Scrooge proves himself fairly versatile in spite of his age.  His attacks are done using his cane, which he primarily uses to jump on enemies like he’s using a pogo stick. He’s also able to swing the cane like a gold club, which doubles as a frequent means to find cool secrets. Both methods fit his character well.  There are also the standard controls like jumping, which you’ll be doing a lot of, and ducking which is helpful when riding carts around in the subterranean African mines.  Everything is pretty simple overall, and you’re sure to become proficient with a bit of practice.

One last thing I wanted to mention about Duck Tales is how you choose among three difficulty levels, securing the games wide appeal from kids all the way to seasoned gamers.  And really that’s what Duck Tales is … an excellent kid’s game that adults can still love!

Capcom did some amazing work on the NES console, and Duck Tales is easily one of the best games in their rich library.  It’s wonderfully crafted on almost every level, and is a pure joy to play.  The fact that the game has gotten remastered is a real cause for celebration.  It should encourage those that missed it the first time around to pick up a copy for the NES.  Those of us who already grew up with this gem don’t need any excuse to replay it.