The Wii U could use a game like Ice Hockey.  The NES classic turned 25 this year, and would make an ideal retro revival for the Wii U’s rather lean sports library.  This is especially true when you consider the uncertain future of Electronic Arts “strong partnership” with Nintendo (in spite of EA’s lazy ports).  Ice Hockey is thankfully accessible to Wii and Wii U owners via the Virtual Console service, in all it’s 8-bit glory.

You’d be hard pressed to find a genre of games that age worse than sports.  The fact that Ice Hockey has remained fun and is still worth re-playing these 25 years later is a testament, not to the games mechanics, (which are obviously dated) but to the games simple, fast, and fun gameplay. 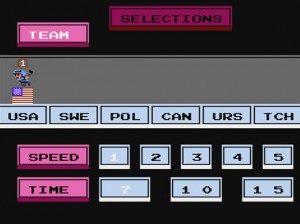 One of my favorite elements of Ice Hockey is how you can customize your team.  Although the choices are limited (thin, ordinary, or stocky players) you might be surprised how much diversity these combos still manage to deliver.  A team consisting of mainly ordinary players, with their average attributes, might be best when first starting out (the game does have a learning curve) but before long you’ll probably either be tearing up the ice with mostly thin fast players, or running over the opposing team with the stocky strong ones. 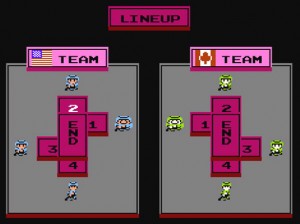 Another memorable element with Ice Hockey is the fighting.  Battling for the puck often leads to fights that aren’t just simple 1 on 1 affairs, but involve the whole teams.  It’s amusing to see both clubs in their entirety get involved in the mayhem, and the inevitable penalty can shift momentum. 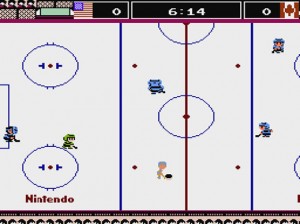 These aforementioned aspects help elevate Ice Hockey beyond a basic 80’s sport game into something special.  While the bulk of sport titles are quickly forgotten, Ice Hockey is among a handful of the timeless classics in the genre.  Whether you still own the original for your NES, or have downloaded it via the Virtual Console for just $5, Ice Hockey is a game that’s worthy of your time (especially if you game with friends, as  2-player mode shines).  Celebrate the games silver anniversary by playing this addictive classic today, and dream about the long overdue sequel.