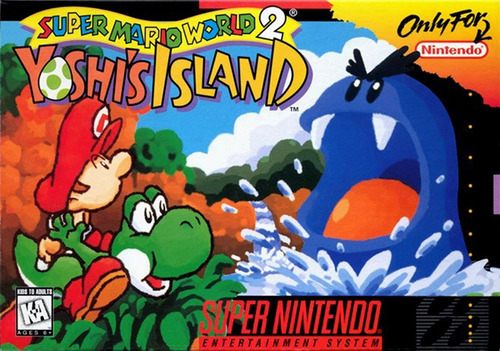 Video games can be very powerful. Not just powerful in its graphics or cinematics, but the emotional effect that they can have on gamers is pretty astounding when you really take a look at it. Every gamer has his or her own preference of what is known as their comfort food of games. It’s that one game that we reach to when we feel depressed, angered or just down right bummed out. I’ll admit that I have many comfort games, but one in particular is Yoshi’s Island for the SNES.

There is something about this title that just screams happiness and makes me realize that while the world may have its dark and depressing moments, its the little things in life that make us smile. This title would be a bold step for Nintendo as Mario is featured in the game, he is not our main character. Instead our favorite green dinosaur gets a shot in the limelight. And boy was it something to remember!

Where It All Began:

The full title of this game is Super Mario World 2 Yoshi’s Island but don’t let the ‘two’ fool you. This game is in fact a prequel, taking place before Mario and Luigi began their adventures in the Mushroom Kingdom. The story goes as such.

A stork carrying both baby Mario and Luigi is on route to deliver the toddlers to their respective parents. The stork is then ambushed by Kamek, Bowsers wizard/advisor, has forseen the brothers becoming a problem to Bowser in the future. What better way to prevent that from happening than to stop the problem at its source?

Kamek’s plan falls short, as he was only able to steal Luigi. Seeing as though he is shy one baby, he sends out his toadies to retrieve Mario at any cost. So where is baby Mario? While Luigi was captured, Mario fell from the storks grasp and began plummeting toward the earth.

Then enters our hero Yoshi taking a stroll through the paradise that is his island. His walk is interrupted by Baby Mario landing on his back along with a map. The map that was carried by the stork shows the original route, but Yoshi can’t seem to make sense of it. 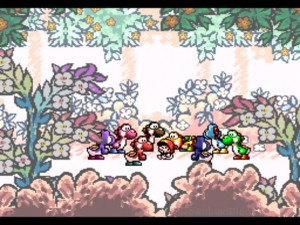 After meeting with the other Yoshi’s, they discuss on what to do about this baby that fell from the sky. Turns out that the brotherly bond between Mario and Luigi, informs them on where the other one is. Maybe the Mario Bros. had ESP at a young age. Anyway, the Yoshi’s then decide to reunite the brothers and traverse across the island using a relay system. Thus begins our adventure through one of the happiest games that is bound to bring anyone out of a depressed mood!

How To Ride A Yoshi:

Right off the bat, the game gives you a quick tutorial on your basic controls. The familiar style of your typical platformers are present. Running, jumping and all that good stuff. But there are some different elements that really compliment Yoshi’s character and are still present to this very day.

Remember how in Super Mario World when Yoshi would eat an enemy they just vanished within the bottomless pit that is his stomach? While he does still consume everything within his sight, enemies are now turned into eggs that act as your ammunition. Not only can these eggs be used to attack, but can also act as a means of gathering collectables that may be out of reach. We’ll touch more on the collectables later on.

Speaking of things just out of reach, Yoshi can get some extra leverage by performing a hover jump that can be used to traverse larger gaps or scale over obstacles. It also comes in handy when you accidentally lose your footing.

Last but not least is Yoshi’s patented move, the ground pound. In this adventure, the ground pound is used as a means to pound posts into the ground, finish off certain enemies or open pathways to new areas. This move would go on to be used in future Mario games such as Super Mario 64, the Mario Party Franchise and the Super Mario Galaxy series.

The most important part of Yoshi’s adventure is your cargo. Your goal is to get baby Mario back to Luigi without the toadies getting the jump on you. This can prove a challenge seeing as though everyone and their mother is out to stop you. Whenever you take damage, Yoshi is briefly stunned while baby Mario is sent floating away in a bubble crying. While baby Mario’s crying is annoying (scratch that, VERY annoying), it serves as an incentive to get him back as quickly as possible to stop his constant wailing. But all is not lost when having to collect baby Mario.

While you’re working to get him back, a timer will begin a countdown usually beginning at 10. The counters time can increase depending on how many starmen you collect throughout each level. The more starmen you have, the more time you have to get Mario back. Extended time is good and all, but by far the best way to avoid a crying Mario is just to not get hit. It’s as though the developers made his cry so annoying that over time you would force yourself to get better just so you didn’t have to listen to him. 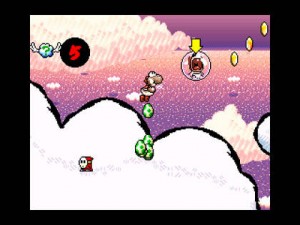 At the end of each level, you are scored by the amount of starmen, red coins and sunflowers collected. There are a total of 30 starmen, 20 red coins and 5 sunflowers throughout the level for you to collect, each of them having their own benefits. As mentioned earlier, collecting starmen increases your timer when getting back baby Mario.

Collecting red coins adds to your overall coin collection, getting you closer to the 100 coin 1-up reward. These red coins are by far the most challenging to collect, as most are not in plain sight. These coins can be located in a secret area of a level or hidden within posts that need to be ground pounded. Finding them may be a challenge, but oh so satisfying when discovered.

Sunflowers can increase your chances on getting a bonus challenge at the roulette wheel presented at the end of each level. Winning these bonus rounds can grant you extra items such as 20 extra starmen, a full set of eggs, different types of watermelons for extra attack power and much more. Not only that, but collecting all 5 grants you an extra life. Needless to say, there’s a lot to collect with each level. But is collecting all of this really worth it? Well kind of. While yes gathering all starmen, red coins and sunflowers not only gives you a 100% and the chance to score more 1-ups, it can be quite the challenge.

This requires you to search high and low to find each red coin and sunflower while reaching the final goal without taking damage so you can keep your counter at a full 30. Completing all levels in one world with a 100% score gives you a secret level and a bonus game level, but in the end it’s more for bragging rights. If you’re looking to test out your gaming skill, I say go for it.

What a Beautiful World!:

Nintendo hit the nail on the head when developing this game. It took a different approach with its art style, which provides an all around charm and uniqueness that you wouldn’t experience in any other Nintendo game. The scenery looks like something taken out of a coloring book and it just looks amazing. It fits the overall atmosphere and dare I say, it’s pretty darn cute. In fact, everything in this world is cute. From the Yoshies being able to turn into helicopters, trains, cars etc. to the enemy designs and the overall background. Heck there’s even a moment where you get to play as baby Mario as he runs around in a diaper with a cape! How awesome is that! 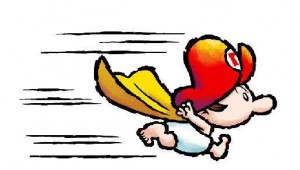 What really helps accent the scenery in this game is the music. This for me is the biggest up lifter, as I’m not only hit with a wave of nostalgia, but also just overall happiness! I challenge anyone to try and play this game with a frown on your face. Just as a forewarning, it’s impossible. If you do manage to play this game without smiling, then I think you need a hug. Not only is the music played throughout each level fantastic, but the level/world select music is catchy too. After each world is completed, another part of the overall melody is added on. This not only excited me when playing, but I felt a real sense of progression as I played on. I couldn’t wait to finish off the next boss so I could hear what the music would change to!

While on the subject of boss fights, the bosses in Yoshi’s Island can be somewhat comical yet thrilling. Boss fights always start with a regular sized enemy standing before you followed by Kamek taunting you on your progression. Kamek then gives the boss a magical boost changing them to a larger size. One thing that’s great about these boss fights is that the level itself teaches you how to defeat the adversary that lies ahead. For example: The boss for world three is a giant Piranha Plant. It has an obvious weak spot but is only accessible by ricocheting eggs off the wall to skip across the water, which is something you learn at the beginning of said level. See kids? Knowledge is power! Yoshi may have made his debut in Super Mario World, but he truly shined in the Nintendo world with Yoshi’s Island. Just looking at the story, you realize how important he is to the Mario universe. If it wasn’t for him and the other Yoshies, Mario and Luigi would have never been reunited, there would be no one to save the Princess and stop Bowser from taking over the Mushroom Kingdom. For a game as cute as it looks and sounds, it also does provide a well balanced challenge that can really test out any gamers skill without seeming impossible to beat.

This is a title highly recommended as it is not only fun, but a great way to get excited for Yoshi’s soon to be move to the 3DS and Wii U!

What’s your comfort video game? Let me know in the comments section below!

Photo Credit in order of apperance: