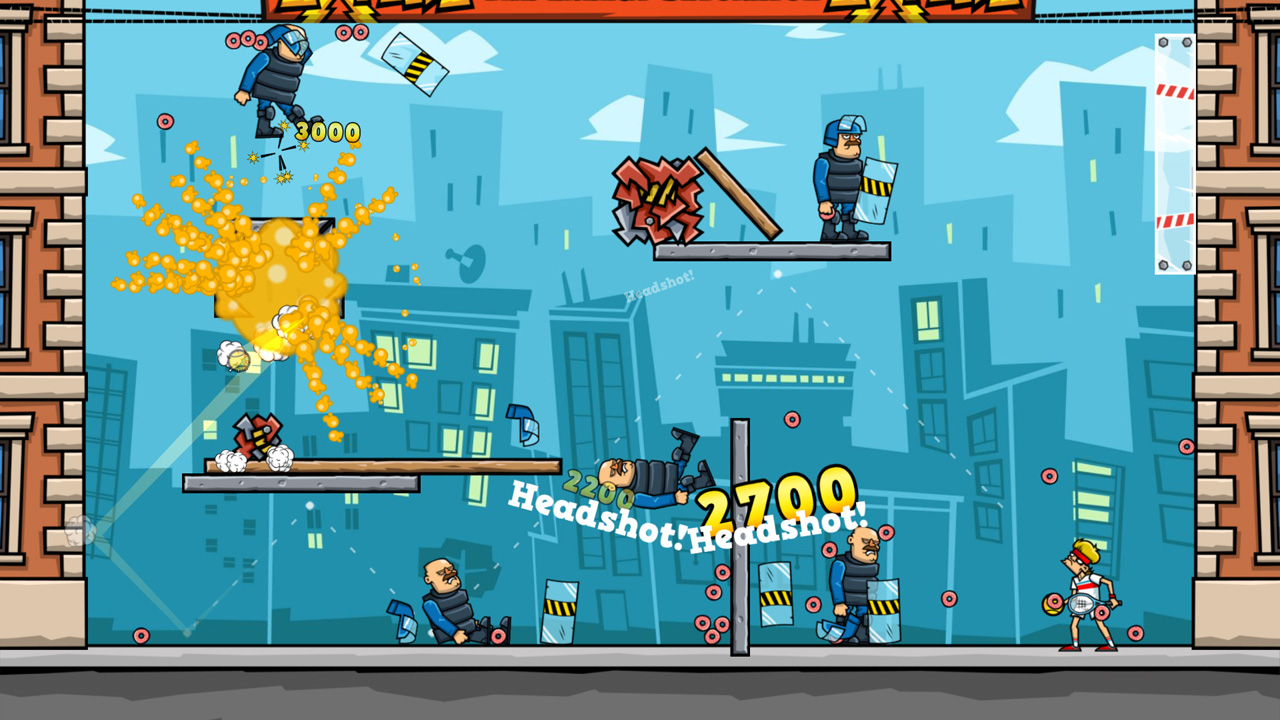 Tennis in the Face – what a title! Not actually a sports game, this is a physics-puzzler, with “Easy to pick-up bouncer gameplay” according to the developers. You control a former tennis star suspended due to his energy drink addiction. Now it’s time to stop the evil corporation, Explodz, and what better way than by smacking tennis balls in the face of your adversaries. They include corporate suits, hipsters, clowns, and more. The sheer goofiness of the game’s theme adds some originality to familiar gameplay.

You’ll square off against them over the course of 100 levels, spread out over a gradually opening map. There’s a measure of non-linearity as you always have access to at least a few levels at any given time. This can help to limit any frustration.

Perhaps that familiarity plays a part, but Tennis in the Face isn’t an especially long game, as it only took me a couple of hours to beat. However, you’ll probably want to replay it some to earn additional medals. High score pursuers will appreciate the leaderboards as well. Extras like these, along with statistics, help flesh out the package.

Aesthetically, the presentation here is that of an older mobile game, which of course is what Tennis in the Face is. Colorful, with some silly animations, but nothing that will wow you. However, for its budget price, it’s not bad.

Consistent physics is what separates the great physics games (like Angry Birds) from the dime a dozen offerings. Tennis in the Face comes up a bit short here, with identical moves at times leading to different results – same swing strength, same target, but different bounces. Some might like a sporadic injection, but it left me wishing for a tighter design.

Tennis in the Face can provide some laughs, while offering a somewhat addicting experience in short stretches. The $4.99 price certainly helps as well. But how much will the occasional, inconsistent physics dampen your fun factor? If that thought gives you pause, I’d suggest checking out some of 10Tons’ other Switch releases first. Tennis in the Face is just okay.

But how much will the occasional, inconsistent physics dampen your fun factor? If that thought gives you pause, I’d suggest checking out some of 10Tons’ other Switch releases first.