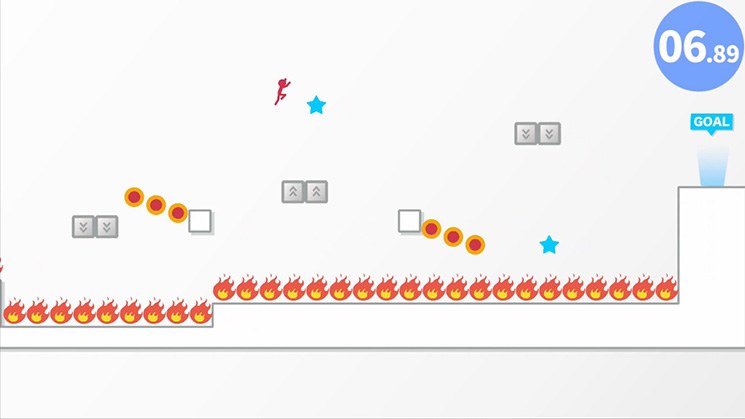 Much to one’s surprise, 10 Second Run actually has a little bit of history with Nintendo platforms. Before the eShop, there was WiiWare and DSiWare Shop, which was Nintendo’s first steps into offering digital games to its home and handheld console platforms. Both were received well by users (despite some who felt the services weren’t promoted adequately) and soon gained modest success during their existence. While the WiiWare selections like Mega Man 9 & 10 and even World of Goo get a lot talk, there were several DSiWare games that gained cult status. One such title was 10 Second Run, a quick-on-your-feet platform runner released in late 2010. Now, eight years later, we are graced with Switch reboot of the DSiWare favorite in the form of 10 Second Run Returns. With a slightly updated look and more gameplay options, there’s more here other than its simple premise to make you take a look at what you missed on the DSi.

While the concept of 10 Second Run Returns is indeed fairly basic, it soon becomes apparent that it hooks you immediately with its time-based challenges. In the game, you control a stick figure man through various platform stages with different obstacles and (surprise, surprise) must get to the end of the level in 10 seconds or less. With 50 stages to complete, along with various bonuses, you will be blazing through each while also re-attempting again and again to perfect your score. In addition, there are three blue stars littered throughout the stages to collect. These stars can be used to unlock the 50 bonus stages, which get harder with varying degree. 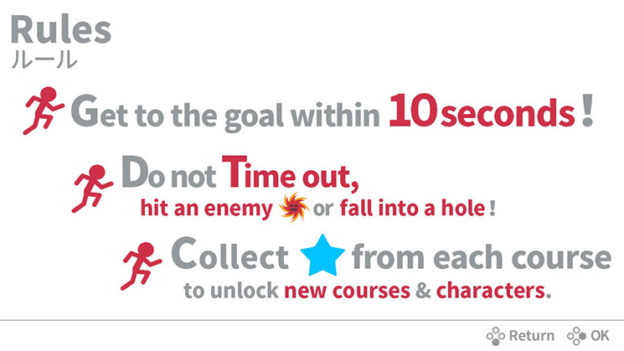 On the surface, 10 Second Run Returns may not look like a big leap in terms of a sequel but rather it’s a needed reboot to accommodate the Switch’s mechanics. Throughout the few hours of playtime, it was easily noticeable of what little new touches were brought in to spice things up from the DSiWare original. For starters, the ability to wall-jump adds a new layer to traversing through platform obstacles (or collecting blue stars) in quicker fashion. This alone made several challenges more convenient rather than one hoping for a well-placed run-and-jump, which, honestly, was followed with many failed attempts. Visually, you are treated to white backgrounds alongside a bumpy soundtrack to help ease you through each stage. Also, you’d be surprised with how tricky, challenging, and addictive these stages can be as you progress. Sure, first you are given two to three easy, simple levels to get used with the flexible (and more fluid from its predecessor) stickman; but then the difficulty soon spikes favorably to where you want to grab that one blue star that’s been mocking you for the umpteenth try. 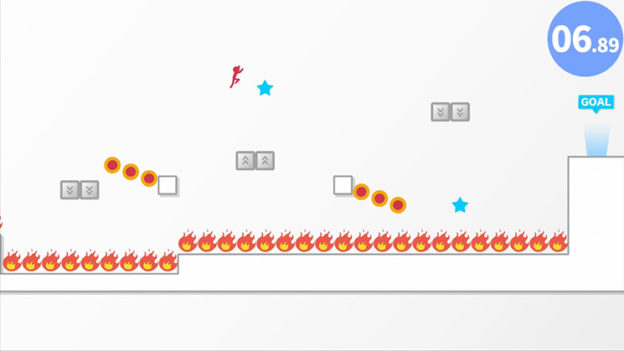 When it comes to challenge, again, 10 Second Run Returns does not slouch with its difficulty. As mentioned before, you will speeding through level after level as that 10-second timer continues to slightly haunt you as jump through moving spike traps and pits of fire just to get to the end goal; however, that challenge alone is amped up when you want/need to acquire every single blue star in each stage. It serves as that extra itch to go for the high score and be a full-on completionist, considering that many platformers of this type. Yes, the overall concept is almost bare-bones basic, but it has enough charm to keep your attention here and there for pick up and play. Even in the midst of multiple attempts at one stage, never did I feel betrayed by shoddy level design or a cheap death trap. Everything was in order, yet I knew there was some level of frustration growing in me as I tried my best to collect every single blue star to unlock more challenging obstacles to sharpen my platforming skills. It’s simple, purely basic, but just oh-so rewarding when you make it to the end of a level unscathed and in tow with every collectable. 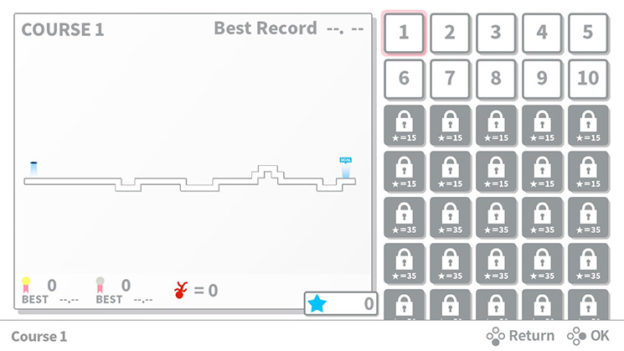 With 10 Second Run Returns now on the Switch, it also opens more gameplay variety with its newly-added cooperative-play options. In two-player versus, you will compete in a race in the same 10-second format (sans collecting stars, of course), whereas in Battle Royale gives you the option up to four other players. Both of these modes offer their own form of fun, but can it get overly grating since the removal of collecting blue stars sorta eliminates a better challenge. Still, for a few minutes with friends, the co-op modes can be a fun distraction. Unfortunately, though, the Marathon mode (running through all 50 stages one after the other for the fastest time) from the DSiWare original does not make a return. This mode I do wish was included, because the idea itself feels like a speedrunner’s dream. Hopefully, a future update will rectify this, but don’t hold your breath. 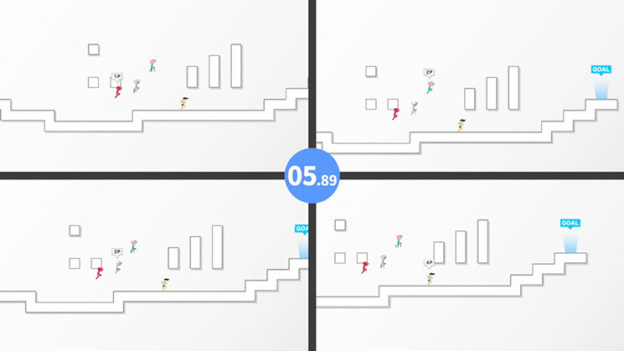 10 Second Run Returns on the Switch is a welcome refresh of an almost forgotten DSiWare gem. While basic in design and concept, the challenge alone in each of the game’s 50 stages and 50-plus bonus stages give enough reason to finetune how well one knows a platformer. The slightly underwhelming multiplayer modes and the absence of Marathon mode from its predecessor do hinder the overall package a bit, yet the entire single player experience is enough to keep you fully entertained. In just 10 seconds flat you will know exactly how this game grabs your attention.

10 Second Run Returns may just be basic in premise and concept, but it somehow keeps you fixated with it for even if it’s for a few hours. Aside from a multiplayer that needs more polish and a missing mode from the DSiWare original, this is a cheap but fun plaformer for anyone up for a quick challenge.