Somehow, somebody decided to combine the thrill of horse racing with the excitement of solitaire.  Pocket Card Jockey isn’t a game that is going to compete with some of the mainstream titles out there, but nonetheless offers a solid experience.  Along with this unique combination, GameFreak ties together the races with quirky characters and a light-hearted sense of humor.  You play a jockey killed by a race-horse and, in order to escape the cold-embrace of death, make a deal with an angel to become a champion jockey. 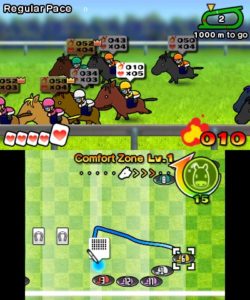 During the foal’s first three years, players have a chance to raise their stats while competing in a series of races.  How the horse levels up is completely independent of the number of races won.  Rather, horses gain experience and skills depending on the number of heart, booster, horseshoe, and skill cards leftover at the end of the race. Cards are usually set within the player’s path, so players often won’t be forced to choose between collecting cards and winning the race.  Once the foal turns four, all growth stops, and the horse can either continue on to new races, or players can retire the horse for breeding.

Horses can acquire skills which will aid players in either the race portion or the solitaire portion.  These same perks can be purchased at the shop, but they are one-use only, and the owner will jack up the prices if you use too many.  Some horses also have characteristics that boost performance and your solitaire hand depending on its position on the track, as well as position relative to other horses.  While knowing where your horse is most comfortable is the key to victory, your opponents can knock you around, potentially costing you the race. 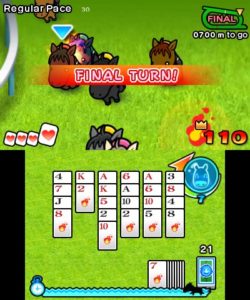 Though the word solitaire is in the title, it’s not quite the solitaire you are thinking about.  The goal is to clear the board by connecting cards in succession (e.g. A,2,3,2 or 8,7,6,7).  The board’s difficulty can increase or decrease depending on your horses position on the track.  Failing to complete a board leads to your horse becoming grumpy, and you risk losing control.  Skill plays a large part in your horses performance, but like all card games, luck plays a huge factor in keeping your horse in the winner’s circle.

The game’s difficulty can shift up and down, depending on the race.  Even the maiden race (which has no time limit for solitaire games) can be a synch or hell depending on how the other horses behave.  Races can get unfairly difficult, and you can find yourself finishing in the middle of the pack despite your best efforts.  Oddly, the game gives you an explanation in the form of some sobering advice:  Yeah, you did well, but sometimes everyone else is better.  That’s the way things are.  I’ve received this explanation several times after falling to superior horses.  I got a good laugh, but other players may not be so keen to receive difficult life lessons from their horse racing solitaire game.  In mature mode, if your horse looses three races, it gets sent off to the retirement farm whether you like it or not. 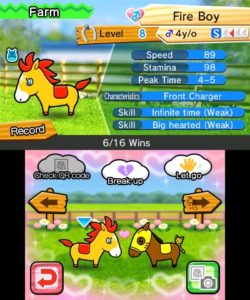 Breeding superior horses is the best way to even the odds against some of your “otherworldly” opponents, but breeding generation after generation of horses can be a bit time consuming, considering you’ll need to run the horse through growth mode until it turns four.  Your offspring’s ability is dependent on genes and how the parents performed in races.  In another bit of realism, inbreeding is possible, but inbreeding leads to a difficult-to-ride horse.

Pocket Card Jockey is by no means an intense experience,…. The game falls under the same category as Rusty’s Real Deal Baseball, which means you are in for a fun time.  On a car or bus ride, Pocket Card Jockey is just what you need to occupy your time; otherwise, there are plenty of other titles out there more likely to win your attention.

Pocket Card Jockey isn’t a game that is going to compete with some of the mainstream titles out there, but nonetheless offers a solid experience.