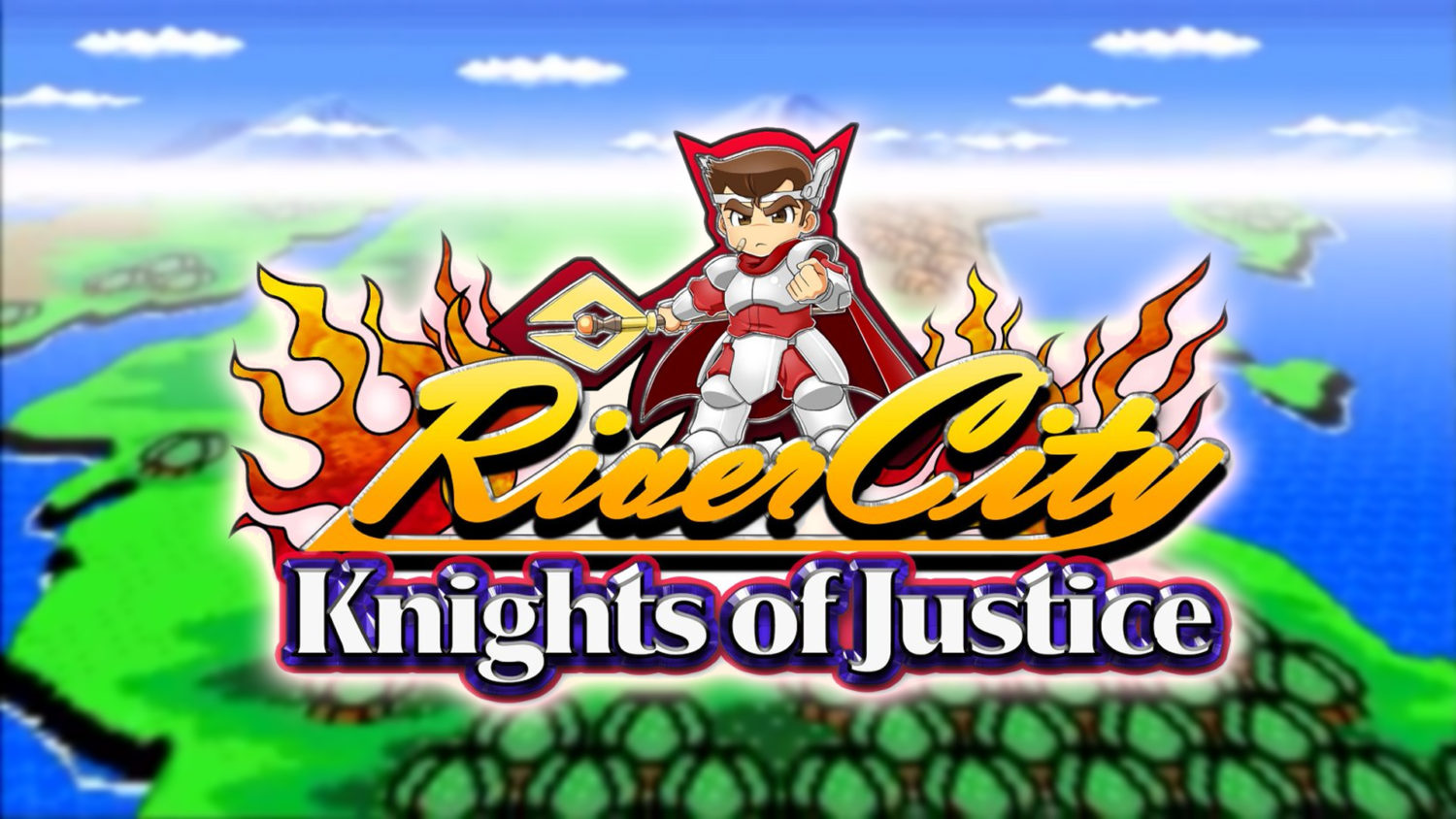 Kunio-kun and friends are back again in the newest installment to the River City series, River City: Knights of Justice for the Nintendo 3DS. This time around our friends find themselves in a new medieval-themed world. Kunio (Aka Alexander), is now a fierce and noble knight who’s going to kick some butt and bring peace back to this lost, magical land. The setting of the game might have changed quite a bit, but the humor and action-packed gameplay that the series is known for is still alive and well. There’s also a refreshing new RPG element added in this time around that a lot of players will enjoy. Let’s take a look at the awesome game that is River City: Knights of Justice. 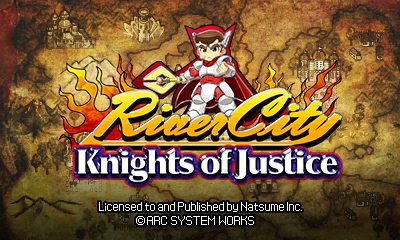 Usually you can find Kunio out in the streets of River City, kicking some frat boy butt or punching his way through a group of jocks. He’s a tough guy and he doesn’t take crap from no one. And while he doesn’t seem like the legendary hero type, he is the one who will save this new land called Riverandia from a dark and foreboding future. The game starts off pretty straightforwardly. You’re told a quick story about the Crystal Tower that stands at the center of Riverandia. From it shines the holy light of love to every corner of the land. Until one day it was suddenly and mysteriously enveloped by darkness. This allowed evil to spread throughout the land, causing horror and chaos to reign. The screen then fades to black and when it fades back in, we are introduced to Sir Alexander Valford (Kunios name in this adventure). As soon as you take control of Alexander an unknown enemy approaches and engages you in a fight. 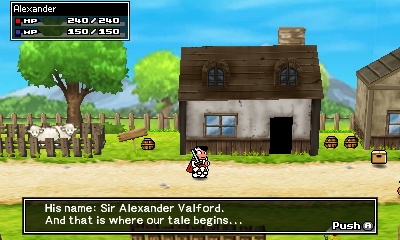 From the very beginning this game is action packed. It lives up to its predecessors in almost every way. My favorite feature is how the developers made the game look like a retro JRPG. The only difference is that you can walk around freely while in town or during a fight. Using A and B to kick and punch, or you can pick up items laying around that will cause even more damage to you’re enemies. The overworld map is similar to Zelda II. You travel on a linear path to the next destination as you progress through the game. So it’s pretty easy to get around to the different locations. Which is great because there is quite a bit of backtracking involved. 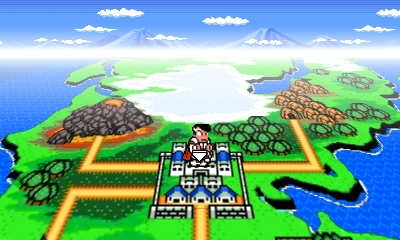 There are over 100 quests in River City: Knights of Justice. You will be tasked with things like slaying dragons and defeating big groups of the imperial army (the bad guys), there are also a few fetch quests. Completing a quest will earn the player money that you can use to buy new weapons and equipment. Not all quests are mandatory to finish the game, but if you want to achieve 100% completion it’s a good challenge. I really enjoyed the range of enemies this time around too. There’s a good variety of different characters that represent the medieval theme well, the Dragon obviously being the coolest. But in terms of difficulty, this game was easy-peasy. 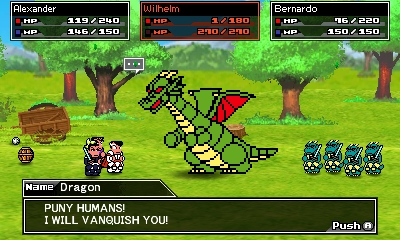 If you’ve ever played a River City game then you’re familiar with how easy the combat is. It’s an arcade-style beat ’em up so your goal is to… beat up the bad guys. You do this simply by walking straight up to them and pressing the hit button over and over again. While some enemies do pack a bit of a punch, most of them will easily be defeated after you smite them a few times. It can get a little repetitive and even though it’s a fun experience, some players might start to feel a little bored at times. 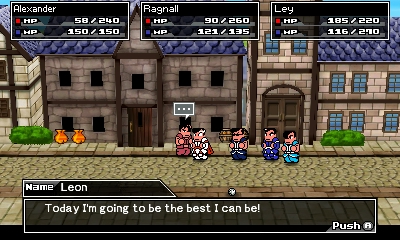 This applies to the dialogue and story as well. There are plenty of comical lines in the game that will make you chuckle. But sometimes this dialogue can go on and on, causing the player to lose interest. This isn’t a huge problem but I thought I should point out some of the small flaws that might burden your adventure. You might, however, enjoy things like traveling to different towns and checking out what new armor and equipment they have. You can purchase new upgrades, broaden your health and magic meter and also unlock new moves to use against enemies. I should also mention that Alexander can acquire help during his quest for peace. You will meet up with other characters who also want to kick some bad-guy butt. The player can choose to let them join your team, or you can do it on your own. It’s your choice (but I recommend bringing a few friends along). 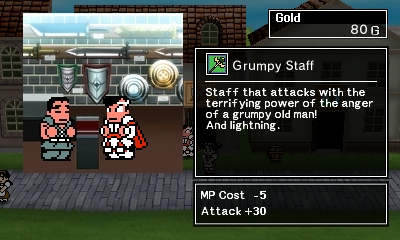 In River City: Knights of Justice you will be exploring caves, dungeons, lush forests and much more. I really like the visual style that was used in the game. It stays true to the series with it’s retro/pixel-y appeal, but you’ll notice some areas and backgrounds use more updated graphics. Some might say that these two styles clash together, but I was pretty satisfied with the way it all turned out. Knights of Justice also has a fun soundtrack that goes along with the theme really well. You’ll hear some awesome-sounding, hardcore chiptunes as you make your way around Riverandia. 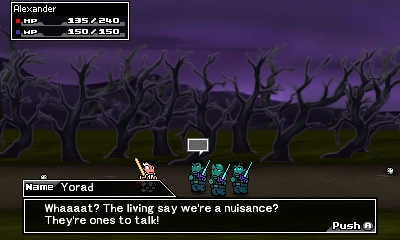 Overall, River City: Knights of Justice is a fun game. It has it’s down sides but this is a game I will come back to and play till the end, which is something I cant say for a few of the other games I’ve reviewed. Length-wise, it can be beaten in just a few hours. But if you take your time and finish each quest you can get your money’s worth out of it. There’s also a fair amount of replayability. Finishing certain quests will open new paths and areas on your adventure map, giving you plenty of options when choosing what to do next. So if you’re a fan of the series or you’re just someone who enjoys kickin’ butt, I highly recommend checking this one out. River City Knights of Justice is available now on the Nintendo 3DS eShop for $14.99.

River City: Knights of Justice is a fun retro-style beat ’em up that will take you back to medieval times. Join Alexander on his quest to bring peace back to Riverandia and beat up as many bad guys as you can on your way to victory. The game has very few flaws (easy difficulty, short length). I had fun playing it and I recommend checking it out if it looks like a game you’d be interested in.