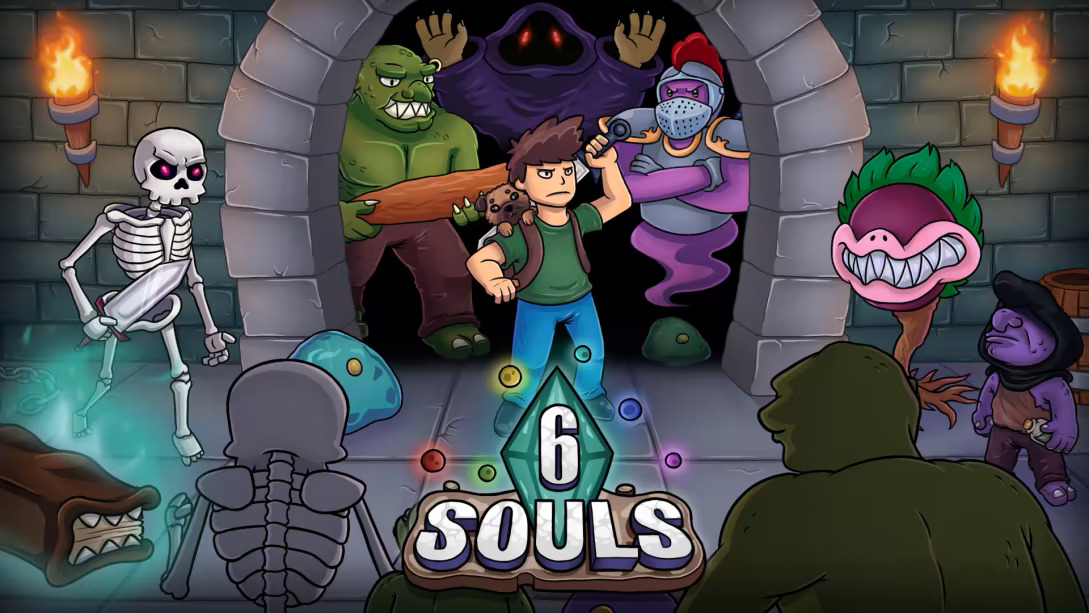 6Souls is an action platformer for the Nintendo Switch. Before diving in, be sure to check your jumping prowess – let’s hope you like your platformers on the impossibly difficult side.

The story follows the adventures of Jack and his dog Butch as they explore a mysterious castle. A dark entity has captured the souls from the mansion, trapping each within a crystal. It’s your job to rescue them by traversing the depths of this foreboding tower. 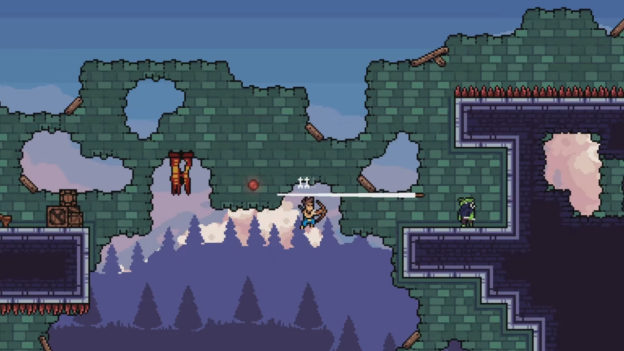 6Souls is divided into chapters of 10 levels apiece. Each chapter is set in a unique part of the ancient house, like the basement or the library. Along the way, you come face to face with a nice variety of enemies, like skeleton guards, hopping spiders, and some kind of angry ogre. At the end of each chapter, a boss fight awaits you, which is a fun way to break up the platforming monotony. These battles are challenging,however, I found them easier than the actual levels!

You mostly assume the role of Jack, though some areas are only accessible by Butch. These sections also provide a nice change of pace, with differing abilities for each character.

You can jump, climb walls, and perform a melee attack as Jack. Butch can’t attack or climb, however he can double jump to reach higher places. He can also bark, which is more of a cute extra that doesn’t affect enemies; I appreciated this little touch, though. 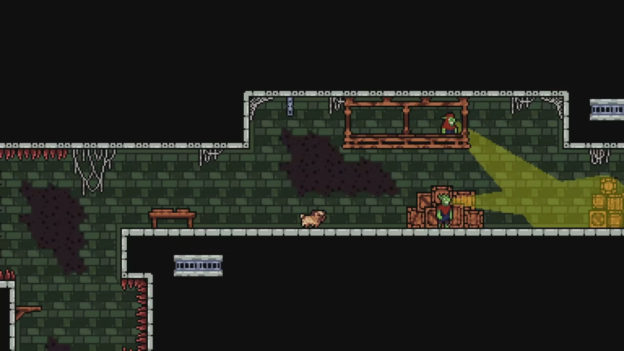 Did I mention 6Souls is hard? It may very well be one of the toughest platformers I’ve ever played; it makes Mario’s unlockable Rainbow Road look tame. You could view this as either challenging or frustrating, depending on your amount of patience and determination. Even though death comes swiftly and frequently, there are a few incentives to keep playing. For starters, you have infinite lives. You also respawn quickly at the beginning of the level with full health. Since levels are short, it’s not much of a setback to restart, motivating you to retry. If you’re patient enough, you’ll be able to try and die repeatedly until you perfect your moves.

I enjoyed the first 20 or so levels of the game, which ramped up in difficulty in a fun and challenging way. They run seamlessly into one another, with the basic premise being to find a key to unlock the door to the next level. It strongly encourages that “just one more” feeling. At some point, though, after countless deaths and increasingly difficult platforming perils, I felt frustrated enough to take a break.

Most of the difficulty stems from increasingly large gaps to jump across. Each soul rescued grants you an extra boost, a special move that lets you phase quickly across gaps that are too wide to jump over. More crystals means more consecutive phasing, which is where the difficulty ramps up. You’ll often need to boost yourself in different directions to find a safe platform. 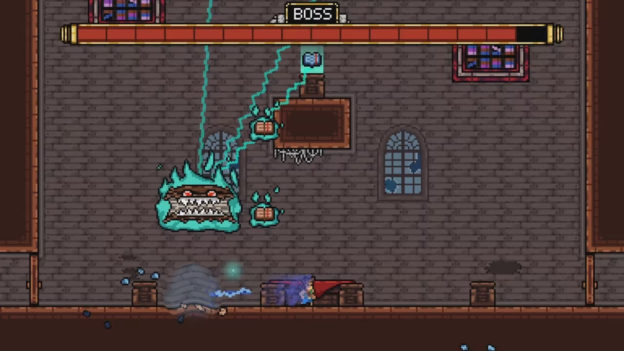 It requires some quick maneuvering and unfortunately the controls hinder this a little. Using B to jump and A to boost both work fine, but it’s tricky to “steer” your boosts. It’s also hard to quickly use the R shoulder button to climb walls. It doesn’t feel intuitive and I think a simple “up” on the D-pad would have sufficed. Or maybe the Y or X button. Either way, when you need to quickly jump, phase a couple of times, and then grab the wall to avoid spikes – which kill you instantly, by the way – it takes precise controls to succeed. There’s a lot of trial, error, and frustration, though I’ll admit it’s satisfying to conquer a tough level.

Aesthetically, 6Souls looks great. It’s another retro-style game, with colorful 16-bit-looking graphics that pop off the screen. This is coupled with a soundtrack that hits the right balance of haunting and upbeat, with tunes that fit neatly into the background. After all, you’re in a spooky mansion with your cowardly dog; the developer has captured the notion of a fun haunting atmosphere well.

Overall, 6Souls is a challenging platformer and I appreciate the graphics, music, and gameplay. It borders on frustrating at times, but if you’re a glutton for punishment, have a high level of patience, and/or love a challenge, this one might be worth checking out.

6Souls is a challenging platformer with great graphics, music, and gameplay. It can border on frustrating, but if you’re a glutton for punishment, have a high level of patience, and/or love a challenge, this one might be worth checking out.