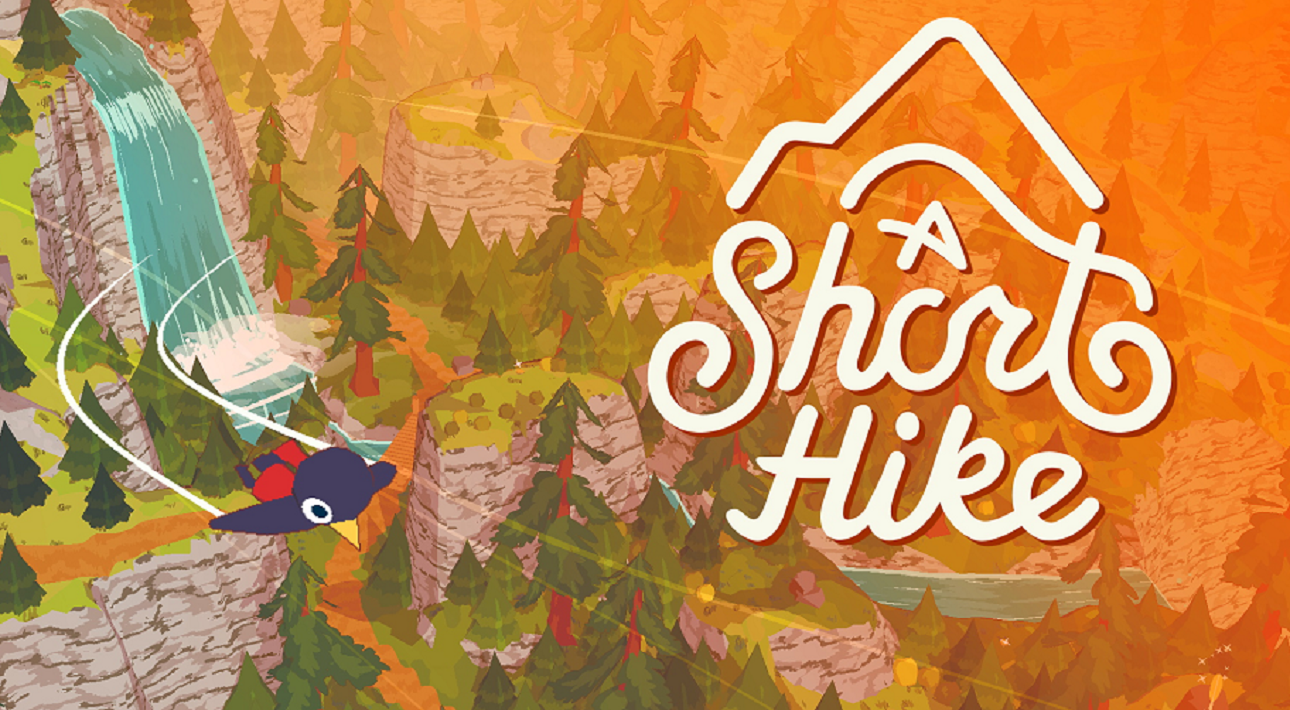 A Short Hike has quickly climbed its way near the top of my favorite indie titles list. Even though it’s aptly named – I beat it in 90 minutes – I couldn’t wait to start playing it again. It’s that enjoyable.

The most eye-catching of all the titles shown during the August Indie World Showcase, A Short Hike, piqued my interest with its Animal Crossing: Wild World-style visuals. The allusions to that classic are also evident in the various animal hikers. Indeed, there are multiple little WW nods, too numerous to list, but no less appreciated as a fan. The entire game looks the way rose-colored DS visuals live in my mind. You can even choose between “big and crunchy” or “small and tasty” pixel sizes.

Taking the role of Claire (visiting her aunt), you aim to reach the mountain summit, Hawk Peak, the only locale with cell reception for her expected phone call. The hike isn’t easy, and Claire will need to collect golden feathers to aid in her ascent as she climbs, flys, and jumps. These can be acquired by interacting with other hikers, finding coins to purchase some, or purely exploring beyond the marked trails of the provincial park.

Even though I beat the game in under two hours, this is not a fast-paced title. On the contrary, it’s quite relaxing. Even when Claire isn’t soaring through the air, this is still a breezy little adventure. Exploring the beautiful beaches, forests, island clusters, and more, you can’t help but be charmed from the fully-realized environments.

Lest you think you’ll just be taking in the various sites, Claire’s inventory quickly fills up. Some of it is merely fun fluff, like different hats for her to wear. But it’s entertaining examining the other items and figuring out where you can use them. Everything has a definite purpose.

On my second playthrough, I was surprised to discover how much I had missed initially. I thought I had been playing at a pretty casual, exploratory pace, but I found many brilliant new things. My one wish would be for some manner of in-game achievement list to keep track of them all. Have I found every last coin? Every feather? For the more striking achievements, maybe a cryptic clue (like the treasure maps) to avoid spoilers. Perhaps in an update.

A considerable element that made me so quick to jump into a replay is the music. Mark Sparling (who’s worked on games like Shantae and the Seven Sirens) has composed tracks that I’d describe as “A day full of promise.” The tunes fittingly change by locale, but it’s a harmonious mixture, much like how AC tracks change hourly but still blend nicely. I almost hate to hear a track end, but another will soon follow, along with welcome ambient sounds. Thoughtful options let you adjust various volume levels to your liking.

I can’t overstate the significance of this airy soundtrack and how it wonderfully complements the visuals. Any game where I want to stand still and simply listen to the tunes (and one that allows me to) is doing something very right. I was hoping I might unlock an in-game music player, but these tracks must be relished during gameplay.

The ending is unanticipated, but for my part, it was the trek to it, or should I say treks. There’s still hidden treasure I need to find, fish I need to catch, and a few other things that I don’t wish to spoil. A Short Hike will be a game I return to time and again, I’m sure of it.

A Short Hike is a game the whole family can love. It’s an homage to classics while still very much it’s own release. There is much to explore, fun characters to interact with, and the entirety of the title just had me smiling. Carve out a couple of hours in your day, curl up with some ‘Strawberries and Toast,’ and give A Short Hike a play. You won’t regret it.

A Short Hike is a game the whole family can love. It’s an homage to classics while still very much it’s own release. There is much to explore, fun characters to interact with, and the entirety of the title just had me smiling. Carve out a couple of hours in your day, curl up with some ‘Strawberries and Toast,’ and give A Short Hike a play. You won’t regret it.