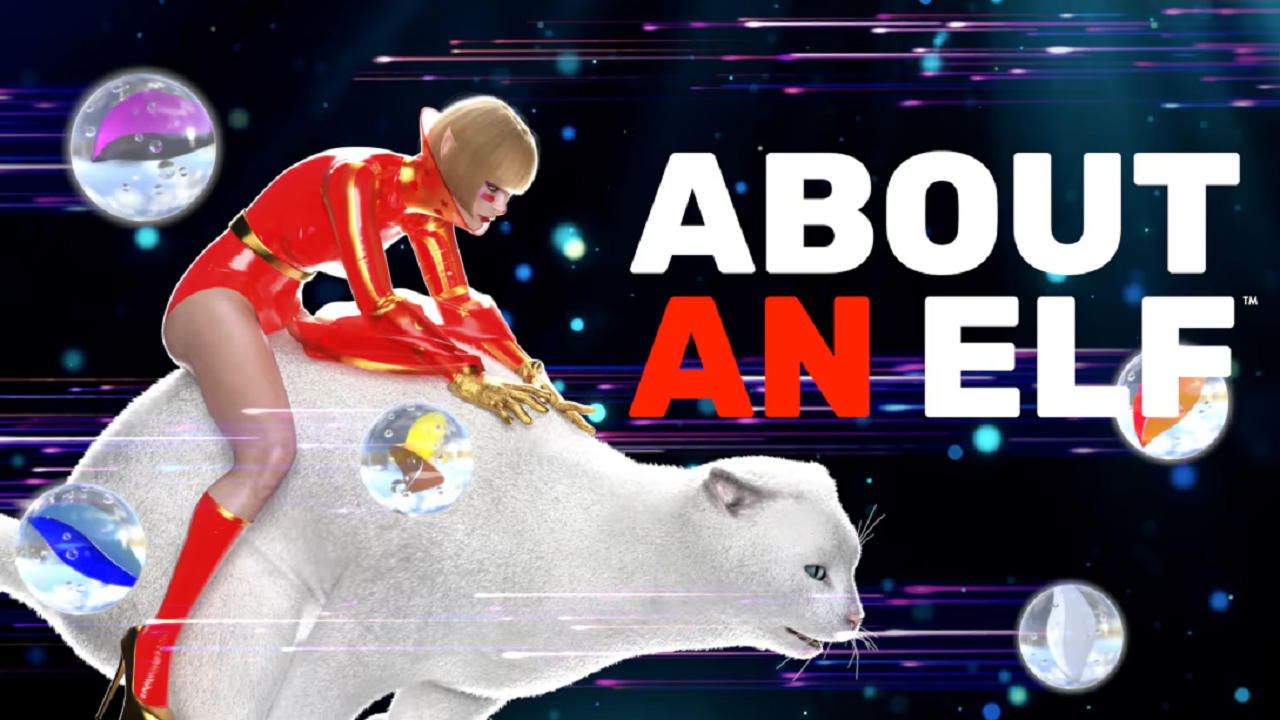 The second I saw the thumbnail to About an Elf, I was hooked. The second I finished watching the trailer, I was even more hooked. I am so happy that I was able to review it. It’s bizarre and way too artsy for its own good, where many people will say “not for me!” without giving it a chance – and to that, I say, “your loss!”.

As described by creators, Meringue Interactive, About an Elf is a “point-and-click-ish, RPG-ish, visual-novel-ish game of gigantawesome proportions.” If that hasn’t sold you, let me further explain the story. The hero of this story is Princess Dam (a real princess because her grandfather said she was one when she was little!), an elf whose quest is to bring about the Elftopia. What is Elftopia? Honestly, I’m still unsure, but it’s important. To do this, Dam and her apprentice Roland the Bravecat – who is literally just a cat – must rid the four worlds of the monsters that currently inhabit it.

When I first sat down to review this, I planned on making my first session a short one. I wanted to get the gist of the game and how it’s laid out, and then planned on returning to it later that evening. I ended up spending multiple hours with Dam and Roland, laughing out loud on many occasions thanks to the bizarre and hilarious writing. This is where the game shines. About an Elf is written in an incredibly genius, thought-provoking yet dumb comedic way; it was a pure joy to sit through dialogue. Throw in the wacky character designs scattered throughout, and I’m not moving from my sofa!

The visuals are a strong contender for second place. The 3D clean art style is hard to categorise. Sometimes I think it’s real people and costumes, broccoli (yes, there is broccoli in this!), and then I realise it’s all computer animation. Every object, person, clown, gnome, cat, elf, shark, bird, rock has a sprinkling of character to it – constantly bobbing and vibing to the Eurovision-esque, electro-pop music. I swear, at one point, a clown was hitting the one-two step on me. The entire game is just full of so much life and energy. There truly is never a dull moment with About an Elf.

You’ll find yourself mostly in the visual novel realm, following Dam as she tells her friend, Dido, about her adventures in exchange for gummy bears; you, in turn, get to live them. The battles that she talks about are dictated by your actions and choices. The battle system is interesting. Dam harness the power of Magiballs. These are small spherical objects – marbles – each containing a unique element -fire, thunder, or water. Each monster you encounter during Dam and Roland’s adventure is weak to one of these elements. As the player, you must decipher which element they are weak to by an abstract vision. For example, I saw the vision of someone squirting ketchup on a hot dog. This led me to choose fire – because hot-dog – and it was correct! They get much more obscure the further you progress. Still, that moment of contemplation ultimately decides if you win or lose the fight. You can, of course, start the fight over if you’re wrong, but it’s highly rewarding getting it right the first time.

I think my biggest issue with About an Elf is the repetitiveness. I am utterly in love with the writing and humour, which helped carry me through the less enjoyable point-and-click areas where you must find the monsters or the secret to continuing in the level. Again, each item, object, or being you interact with offers up top-notch humour, but those repetitive lulls in between are what ultimately stopped me from completing this in one sitting. Which I reckon is achievable if you have 5 hours or so spare.

There are what feels like side quests woven into the game; however, these only last minutes and are used as the set-up for another joke. It would have been nice for there to have been deeper elements to the game. An early example of this is when you assist a monster who gifts you an empty bottle. A few minutes later, another monster promises not to fight you if you give him what he wants, which is nothing. So you hand him the empty bottle, where he thanks you and promises to fill it with something useful. However, he cannot think of what, so you receive a bottle full of empty promises. I feel that About an Elf is missing something that stops it from being genuinely incredible.

About an Elf is a tough game to sell and something you must experience to fully understand what it is and why I genuinely loved my time with it; however, I was left wanting more. More of what, I don’t know, but what I do know is that if this is Meringue Interactives first go at making games, then I cannot wait to see what they do in the future. I hope it includes Dam or a character just as fun.

About an Elf is a tough game to sell and something you must experience to fully understand what it is and why I genuinely loved my time with it; however, I was left wanting more. More of what, I don’t know, but what I do know is that if this is Meringue Interactives first go at making games, then I cannot wait to see what they do in the future.

My love for Nintendo started with Pokémon Yellow, and has only grown from there. Specialising in video game reviews and a sucker for listicles, just try to get me to stop talking about Nintendo (and Pokémon). INS accredited writer.
Comments
Submit a Comment