If you’re looking for something to play on your Nintendo Switch, you’re not alone. Many of us have finished up the newest Zelda installment and are looking for something else to bide the time until some bigger titles are released. Luckily, HAMSTER Co. has released a slew of NEOGEO titles onto the eShop, with one of them being Metal Slug 3. This popular arcade shooter has tons of action and plenty of attitude. The first game debuted in April of 1996, originally released by Nazca Corporation and later published by SNK. Spanning 7 games in the series, Metal Slug turned out to be a very popular cult classic. Despite having a cult following, how does this 2D sidescroller hold up after all these years? 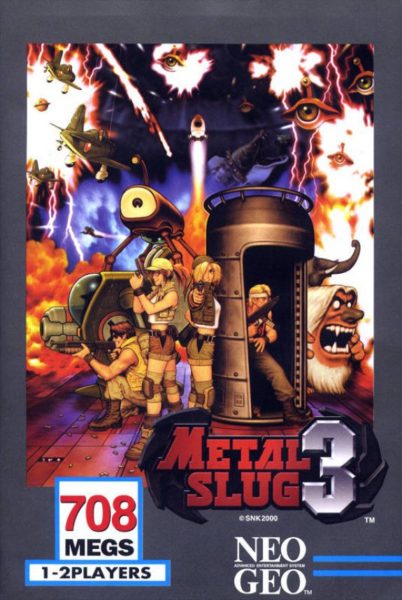 This fast paced, action packed adventure goes hard from start to finish. As soon as you begin, you’re thrown into a literal war zone. It’s your goal to run through the level and shoot anything that gets in your way, using machine guns, rocket launchers, flamethrowers, and a bunch of other crazy weapons. You’ll go up against giant robots, vicious alien creatures, and waves of enemy soldiers who are also equipped with their own arsenal of insane itinerary. It’s no exaggeration when I say that there is never a dull moment in Metal Slug 3. 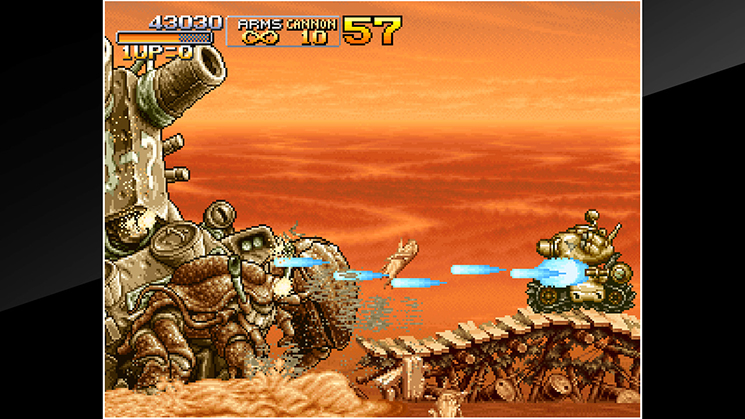 While you’re making your way through the chaos, you’ll have the chance to pick up various power ups like infinite ammo and weapons that have auto target or other cool, special abilities. These only stay in effect for a short amount of time, but they’re really helpful and fun to collect because you never know what they’re going to be. One thing that might frustrate some players is that getting hit once means game over. There is no health bar or anything like that, so the difficulty level is definitely geared towards a more experienced gamer. However, in the spirit of the game’s arcade style, you can always continue by “inserting more coins”. You can do this by simply pressing start and beginning right where you left off. It’s as easy as that. So even though you might die…over and over and over again like I did, you can always keep on truckin’. 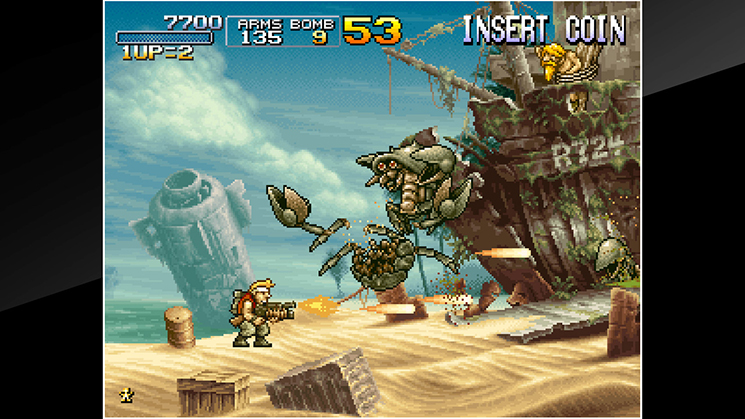 Aside from the awesome gameplay and challenging levels, Metal Slug 3 also graces us with its amazing visual style and retro graphics. Reminiscent of the 90’s arcade era, it’s a very cool, nostalgic experience. I love the quirky animations and detailed environments. Everything runs smoothly, even though there is A LOT going on, on screen. With enemies running around everywhere and weapons going off constantly, its very surprising that I experienced almost no lag what so ever. You can also adjust the display in the settings menu to fit the screen however you prefer and even add a filter to the picture so the game looks like an old CRT TV, which is pretty cool. 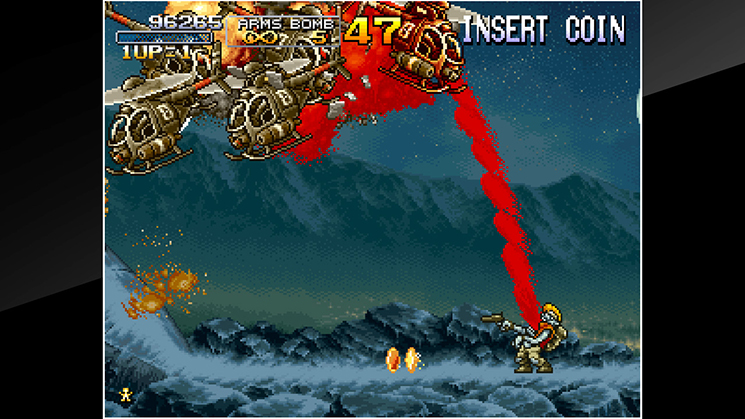 There are actually a lot of things you can change besides the display when it comes to Metal Slug 3.  You can customize your own button layout and chose what works best for you. You can even pick between the English version of the game or the Japanese version. A lot of people will also be excited that online leaderboards are present, as well as eight different difficulty levels for you to play through. High five if you can go beyond the first one because I’d rather not put myself through that craziness. 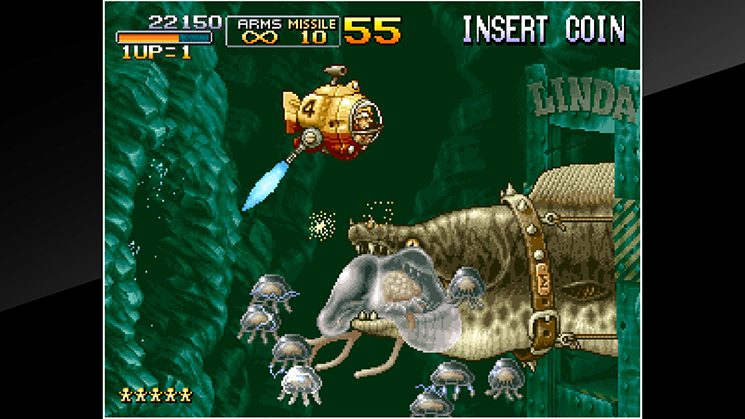 One more thing I should talk about is co-op mode. Playing alone is fine, but having another person along for this crazy ride makes it twice as much fun. Using the split Joy-cons or a pro controller (in TV or table top mode) you and a friend can run through and destroy tons of enemies together. Even if you don’t usually play these kinds of games, it’s really hard not to enjoy yourself during a co-op run through. Two is always better than one, especially under the challenging circumstances of the game. As far as replayabilty goes, there are a few different modes that will have you reaching for high scores and challenging your skills to their fullest extent. So rest assured, there’s plenty to keep you busy after you complete the game. 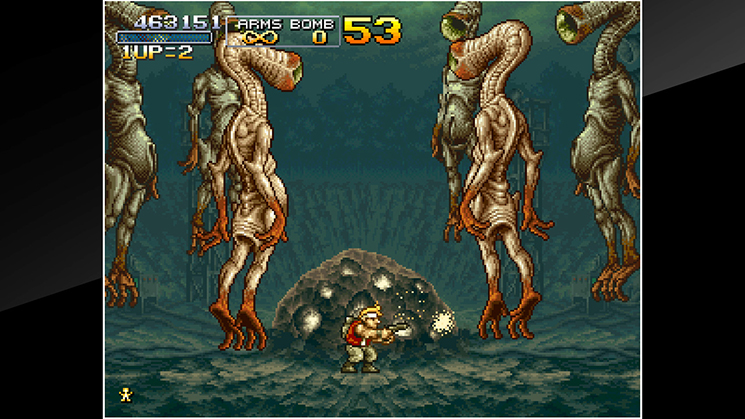 Metal Slug 3 is a really fun, (kinda insane) action packed classic and I’m glad I was able to experience it on the Switch. This is a perfect game to take on the go, or sit at home and play with a friend. While I did read that some other reviewers had a problem with frame rate issues, I personally didn’t experience anything that’s worth noting. Overall, I had a really good time with Metal Slug 3 and I can’t wait until I have enough time to sit down and beat the game. You can download this retro gem today, for the low price of $7.99 on the Nintendo Switch eShop. That is a far cry from the $1000-$3000 that the original copy is going for on Ebay right now (WOWZA!). I highly recommend checking it out. 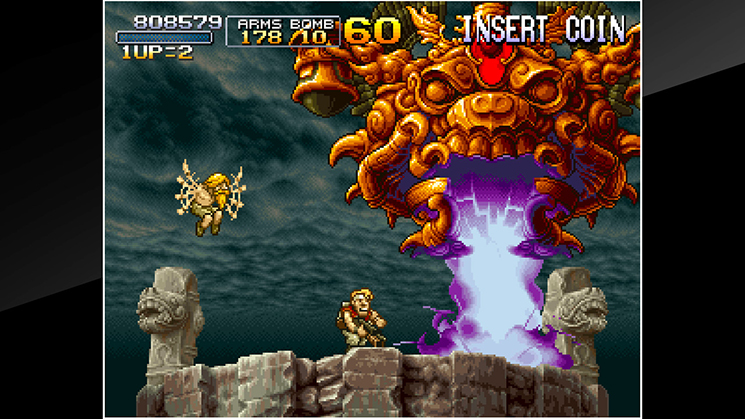 Metal Slug 3 is an awesome side scrolling, arcade style shooter packed with fun challenging gameplay that can also be played with a friend. If you’re a fan of fast paced shooting games definitely check this one out!