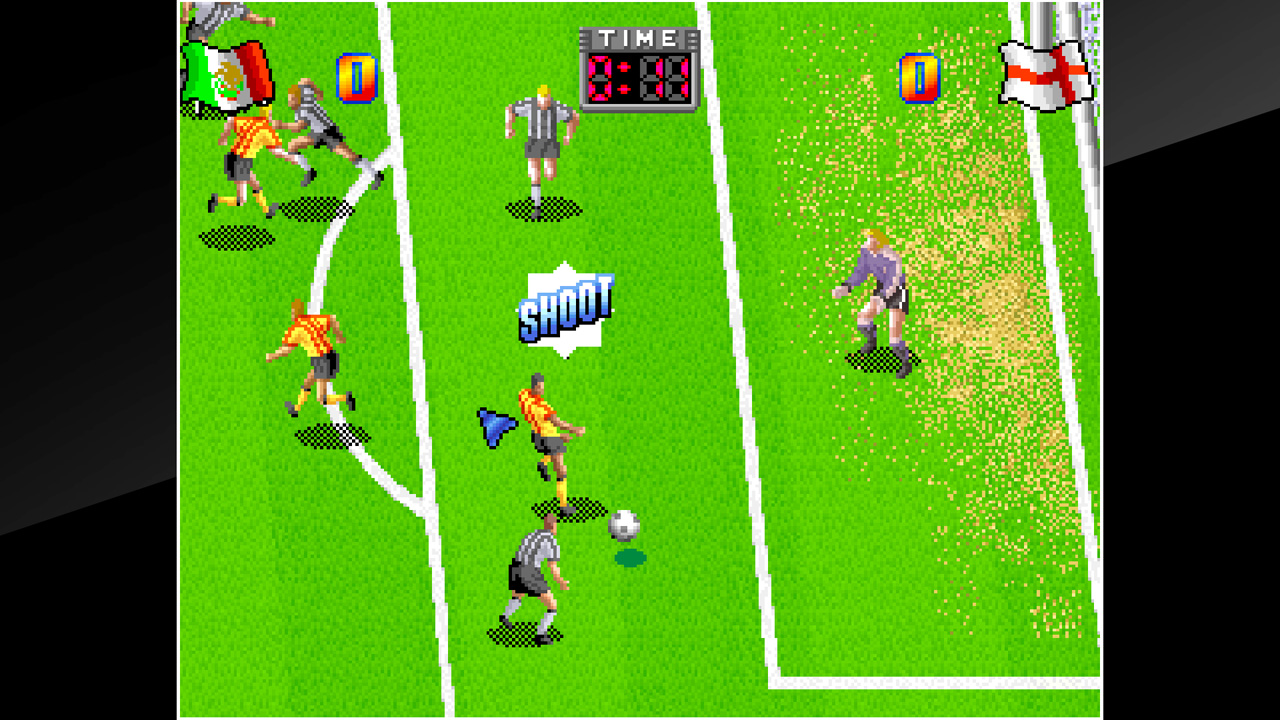 I’ve never been what you’d call a soccer simulation enthusiast. I’ve got great memories of Fifa on the 3DO (kudos if you remember that one) but it’s an exception. Give me an arcade take on the sport though, and things change. Super Sidekicks, of Neo Geo fame, is one such title.

Most know the general basics of soccer, so I’m not going to bother with an explanation here. Rather, I’ll just comment on how Super Sidekicks plays. I find it plays rather well, with easy to learn controls that’ll have you scoring goals in little time – especially if you can get the ball to your “ACE” player while he’s near the net. I get a kick out of the impressive cutscenes that happen when a goal is scored. Of course, you’ll want to experiment with the various teams to learn which are stronger.

Being arcade-style means that fouls are rarely called. However, I have noticed that when they are called, I tend to get most of the penalties rather than the computer. What can I say, I’m not the best. The occasional brief interruptions aren’t enough to drag the game down, but I figured were still worth mentioning. The game isn’t over-the-top arcade with nary a hint of realism, and the balance is actually a good thing.

The characters are a nice, large size, and the game moves at a brisk clip. The music is reasonably exciting, and the roar of the crowd makes it more so. Super Sidekicks has the usual ACA features, with online leaderboards probably being the big highlight, giving the game an extra kick, no pun intended. Just don’t look for my name near the top of the boards, at least not at the moment. I am getting better with practice.

It’s true that sports games usually don’t age especially well. But it’s also true that the Switch has limited sports offerings at present. So even if you don’t have 90s arcade nostalgia, that might be something to consider. For what it’s worth, I think Super Sidekicks has aged reasonably, better than some comparable games from its time period.

Those looking for more depth will want to wait for Fifa to arrive on the Switch.  However, others will probably enjoy what Super Sidekicks offers. Whether playing a couple games in quick succession, going head to head with a friend, or taking advantage of the save state as you work your way to the Championship Cup, the game should keep fans coming back. It was popular enough to start a series, and its arguably superior sequels may arrive on the Switch at a later date. But for now, Hamster’s scored a goal with this release. It’s not the best Neo Geo offering on Switch, but it is solid.

Those looking for more depth will want to wait for Fifa to arrive on the Switch.  However, others will probably enjoy what Super Sidekicks offers.