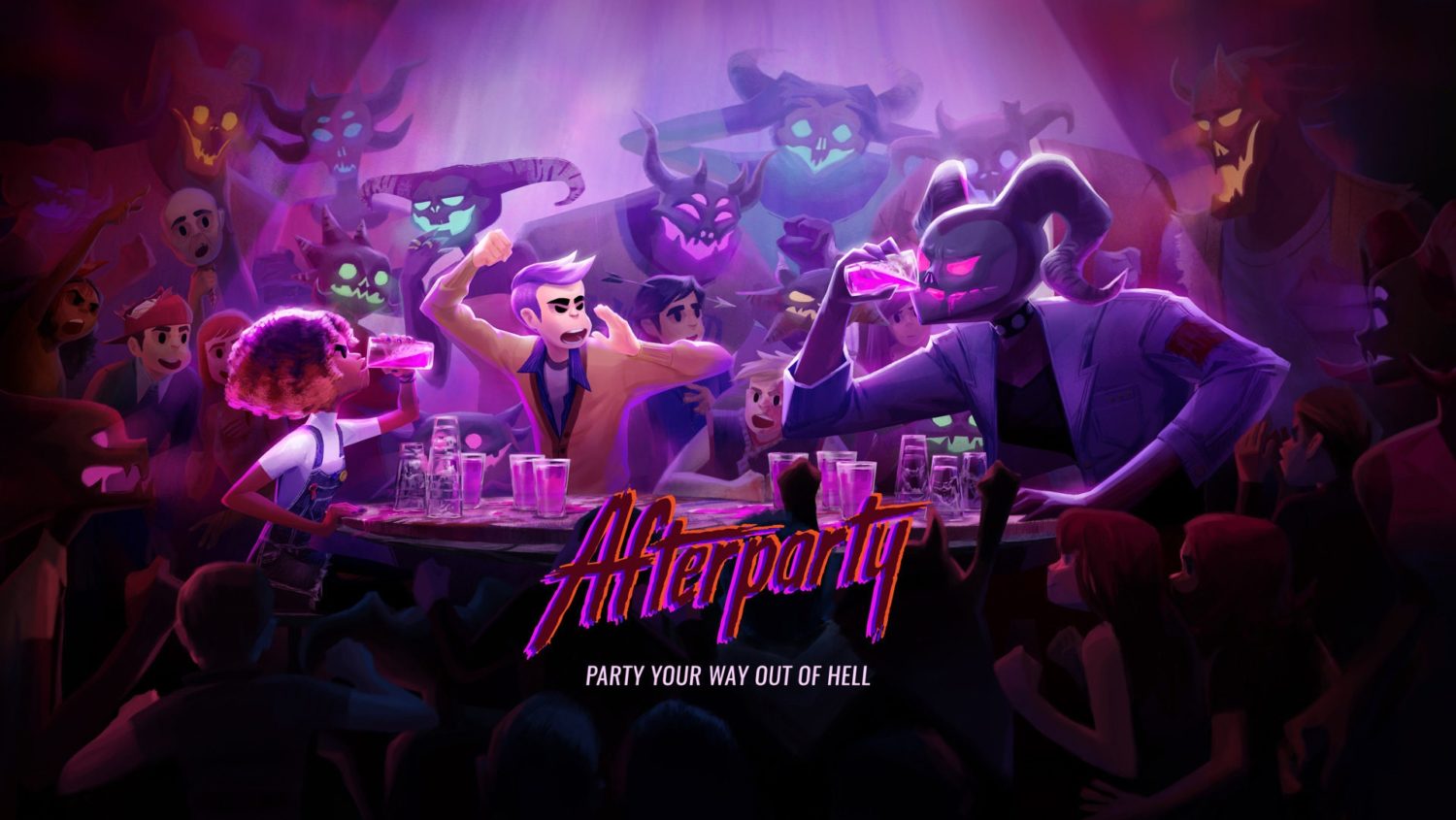 When I heard Night School Studio was working on the game Afterparty, I was elated! OXENFREE, their previous game, was one of my favorite titles a couple of years ago. Seeing Afterparty come to the Nintendo Switch this year meant I could play from the comfort of my living room or in bed late at night, which is ideal for Night School Studio’s vibes. 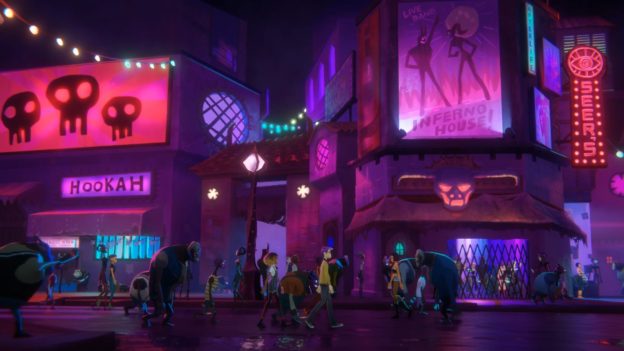 In Afterparty, you play two friends named Milo and Lola who are at a post-graduation college party. Lola is detached but trying to be supportive of Milo who seems like more of an outcast desperate for some recognition and appreciation from his peers. However, none of this matters when the game reveals that Milo and Lola are actually dead.

Afterparty sends you straight to Hell—a comedic mish-mash of what mythology and religion have told us Hell might be—where they are sentenced to an eternity for their sins. What are those sins? You don’t know, and neither do Milo and Lola. They don’t even know how they died. 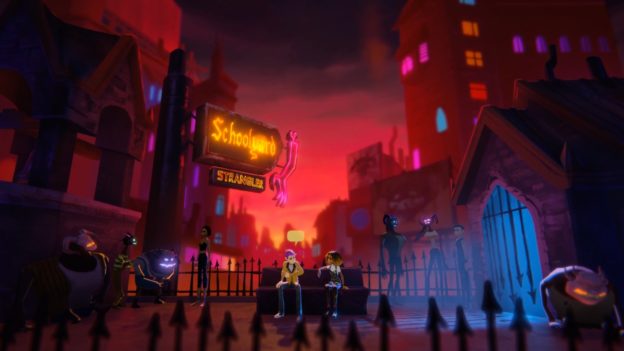 Hell in this game is like a street constantly lit up for the night scene. Demons and people walk around and hang out in the bars just living out their eternities between tortures. The characters are irreverent, funny, and distant. Lucifer (sometimes called Satan, sometimes called Luke) runs the big house party everyone tries to get into every night.

Every person who is sent to Hell is assigned not only their sentenced torture but a personal demon. This is where Mary Sister Wormhorn was introduced. Wormhorn is where I give Night School Studio major props for opening up a funny but sometimes unnerving conversation about what our own personal demons are. She pokes and prods at Milo and Lola throughout the game, tearing apart their memories of friends and family, trying to manipulate how they feel about the lives they’ve lived and their pasts. This mirrored well with how our experiences can sometimes reshape how we remember our past and the people in them. Though, as much as I adored this character, I imagine an eternity with her would be the worst. 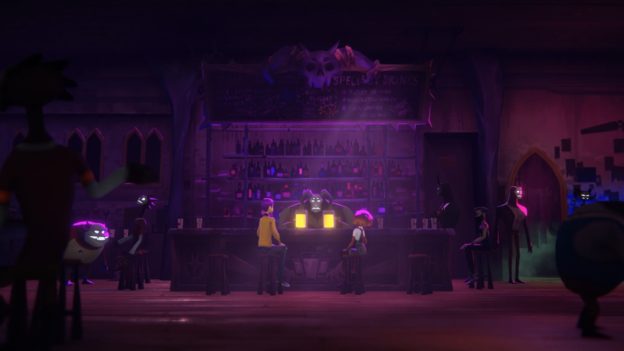 The underworld has humans who have been dead for anywhere from 1 to 10,000 years. Some conversations tapped lightly into social issues in a way that didn’t feel forced or insincere. Watching Milo and Lola interact with people who haven’t been alive since segregation ended or the bubonic plague made for hilarious reminders of how the overworld has and hasn’t changed. And because we’re what makes up Hell, what we experience in our world is also in Hell, but with the worst bits. The funniest example I found of this was when you’re introduced to the social media app Bicker. Bicker is Hell’s Twitter, and it’s replete with troll bots, people copying others’ posts, and subtweets (see: “a post often indirectly mocking another person”). But hell, the booze is free so who cares, right? 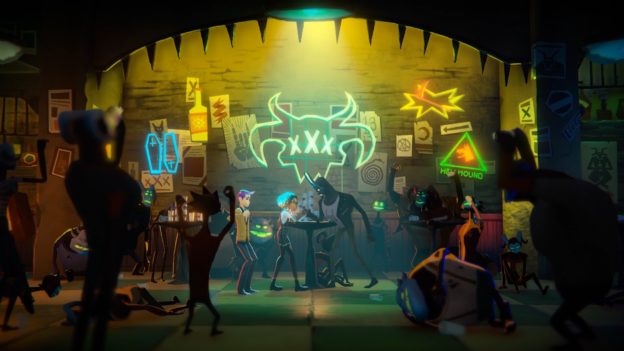 Alcohol plays a large role from beginning to end in this game. Afterparty, much like OXENFREE, is a simple walk-around-and-select-things type of game. Mechanically, there isn’t much to it other than also responding to dialog prompts. However, Afterparty adds in the element of liquid courage to change the way Milo and Lola respond to other characters. Their inebriation also helps them complete mini missions along their way to crashing Satan’s party. I really loved the way the alcohol element was handled. Given the game was meant to be more humorous, they didn’t delve heavily into dark themes with the alcohol other than to show the unbalanced effects of a strong drink and how it affects these two characters socially. Get flirty, get brave, get rowdy. It’s your choice!

Night School Studio did not disappoint with their game Afterparty. If you’re looking for a new game to try out right now, it’s definitely worth the playthrough. (I also very much recommend OXENFREE, too.) I can’t wait to see what’s next for this studio.

Afterparty is a hilarious bar hop through Hell. I had a blast meeting all the demons and people roaming the streets and crashing Satan’s house party. I highly recommend this game for anyone who is looking for a humorous take on life and death. Night Club Studio knocks another one out the park.