Review: Alone in the Dark Wii

Alone in the Dark is a franchise that has been around a long time.  The series recently debuted on next gen systems, Wii included.  The game is a third-person action/adventure that follows a very large, episodic storyline.

The game starts out with you waking up in the middle of, what looks like an examination room.  The opening cutscene sets up the beginning of the story where these large cracks or fissures are appearing all over the place.  As the player, your only job during this cutscene is to continuously blink your eyes using Down on the D-pad to clear your vision as you’re trying to gain your bearings.  This can get a little monotonous, but thankfully it doesn’t last long.  I don’t want to ruin the storyline, but suffice it to say Central Park plays a key role as it was built to hide something ‘big’.  Your job in the game is to survive, but also figure out what the hell is going on.

The gameplay is fairly standard as far as third person games go.  There are various context-sensitive actions you can perform such as breaking down doors, picking up objects, and climbing ladders.  The movement is all controlled with the joystick on the nunchuk, and there are quite a few Wii motions to perform throughout the game.  For example, you can pick up a fire extinguisher with ‘A’ then use both the Wiimote and nunchuk to motion as if breaking down a door.  Some of the motions are clever, especially with puzzles, but some feel a little forced. 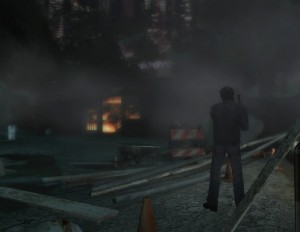 If you’ve never played Alone in the Dark, be prepared for twists and turns in the storyline and a very dark environment.  Every environment is incredibly dark and hard to see.  I found myself using the flashlight pretty much all the time.  A number of guns can be collected as well as using other objects to attack enemies.  The game really lives up to the suspense of a survival horror game.  You’ll encounter various people that claim to have seen monsters and act completely freaked-out at times.  The music in the game is very appropriate and really heightens the sense of darkness and suspense. 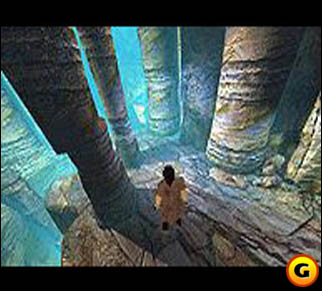 One big feature in the game is the ability to ‘jump’ to any chapter of the game at any time.  If you want to play the last level when you first pop the game in, go ahead.  Just select the last chapter and load it up.  They wanted to make the game’s storyline accessible to anyone, even if they haven’t progressed through the entire game.  Some may like that, some purists may say that’s a little cheap.

Visuals: The graphics are not really up to par for a second-year Wii title.  Any PS2 game will look very similar to what’s being displayed in Alone in the Dark for Wii, which is a little disappointing.  The graphical style is appropriately dark and helps the mood of the game, but you’ll find yourself wanting a lot more graphical immersion.

Gameplay: The gameplay is a bit rough at times.  The controls in the game seem a bit campy in the sense they’re not as responsive.  Some of the camera angles just don’t work well in combat situations and the gameplay can feel slow at times.

Replay Value: The game allows you to revisit chapters any time you want, but the game doesn’t feature any sort of multiplayer or difficulty options.  If you’re an AITD lover, you might find yourself playing this a couple times at most.

Wii Innovations: The Wiimote and nunchuk are used fairly well.  You can tell the developers definitely tried really hard to make the Wii version stand out from the 360/PS3 versions.  Sadly, a lot of the controls feel tacked on and don’t really fit in certain situations.  The Wiimote is used to look around and fire your weapon, but the aiming system is one of the worst I’ve ever seen.  It’s really frustrating trying to fight enemies or even investigate clues when your 1st person view is jumping around like crazy.

Verdict: The last Alone in the Dark game I played was on the Gameboy Color, and honestly I would recommend the GBC version over the Wii version.  The GBC version pushed the platform far beyond other titles at the time, while the Wii version does not hold up to standards for good controls and great Wii games.  If you’re an AITD fan, you might be better off renting the Wii version to see what you think.