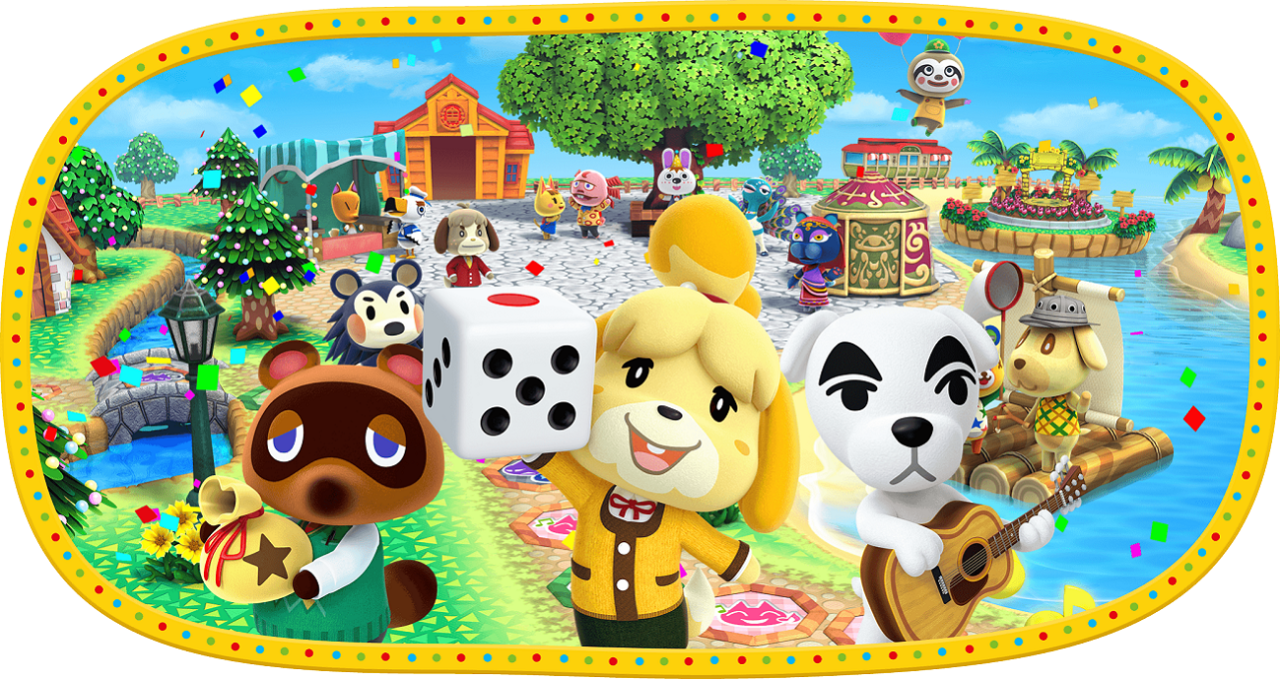 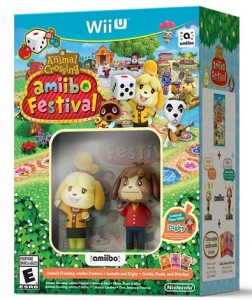 When Animal Crossing: amiibo Festival was first unveiled at E3, my reaction was that of genuine intrigue.  Others responded in far more disapproving ways however.  Though the new Metroid 3DS title ultimately deflected much of the flak, there’s no denying the premature bad press that amiibo Festival received.  While the popularity of Animal Crossing wasn’t in dispute, few expected a board game spinoff.  At last the title is available to be judged on its own merits, rather than mere scant footage.

An interactive board game set in the Animal Crossing universe, amiibo Festival couldn’t be simpler to play.  A role of the die sends you across a branching board in your quest to earn the most happy points.  Up to four of your friends can join in, but computer controlled villagers are also available for solo gamers.  It’s worth noting that you only need one Animal Crossing amiibo to play, even in a larger group, and two figures, (Isabelle and Digby) are pack-ins.  Unsurprisingly, multiplayer was our preferred choice.  Happy points will come and go, depending on which spaces happen to be landed on.  You can also earn more by collecting bells and stamps.

Event squares help to mix up the straightforward formula.  Different Animal Crossing characters will routinely appear throughout each game.  Crazy Redd will sell you gameplay cards, thankfully all legit.  Dr. Shrunk meanwhile will give cards away for free … but you need to endure his terrible schtick.  There are others too but, despite the variety, I really wish there was a way to customize who showed up.  I also wish that some characters were better taken advantage of.  For instance Chip and Nat signal the fishing tournament and bug off respectively, but both are sadly non-interactive.

Each game can last well over an hour, but the option is given to set a timer – as little as thirty minutes if you like.  Should the end near and you desire to keep playing, time can be added on in ten minute increments, which is a thoughtful inclusion.  Upon finishing you can see gameplay stats such as number of spaces traveled, earnings or losses in the stalk market, etc.  The risk/reward element of the latter can quickly alter the standings for better or worse, so trust me when I say to treat those turnips from Joan carefully!  More bells equals more happy points.

The game keeps a running total of all your happy points, which are saved to an amiibo to unlock new emotions and outfits for them.  Other unlockables include customization options.  For instance, after my first game I unlocked the ability to pick which month to play in .  It’s a convenient way experience all of the seasons and their associated events, and I appreciate it.  Further ways to customize include building public work features for the town, which eventually adds paths and alters the landscape.

Besides the included amiibo figures, the game package also includes three amiibo cards.  Scanning a card on the GamePad’s NFC reader lets that character populate your plaza, and they can move into town.  You can also bring in custom designs from the popular 3DS game Animal Crossing: Happy Home Designer.  I can definitely see the collectable pull with these slick cards, which also have their own advantages of being smaller and half the price of amiibo figures.  Their most noteworthy use however is the minigames.

There are eight minigames in total, and all of them are played with amiibo cards.  They’re mildly interesting diversions from the main board game, in spite of their simplistic nature.  Some are variations on familiar games.  Mystery Campers for instance is the Animal Crossing twist on Mastermind, while Restti Bop is Whack-a-Mole.  We found one of the better offerings to be the Quiz show.  It’s designed for Animal Crossing aficionados, but has a phone a friend type option for when you get stumped.  Easily the most robust mini game is Desert Island Escape, which has you moving a team across a new island to build survival tools, and eventually a life raft.  With multiple maps spread across three difficulty settings, and even local leaderboards for recording best scores, it is well worth exploring.  It feels more like its own fully fledged board game.

Visually no Animal Crossing game looks better than amiibo Festival, whose vibrant presentation shines in High-definition.  Highlights like the colorful northern lights shining the night sky were a real treat for us.  The music meanwhile showcases the high quality tunes that the series is known for.  It’s a relaxing listen, keeping with the spirit of the game.

My personal main area of disappointment stems from how Nintendo chose to use the GamePad for amiibo Festival.  It’s utilized for rolling the die, accomplished by tapping an amiibo to the NFC reader.  This is clunky, especially with a group of four, but it pales when compared to the GamePad’s otherwise relative absence.  There’s no off tv play for starters.  Potentially helpful displays like a full map or a permanent showing of everyone’s standings are missing.  Even simple animations of the various participants would’ve been cool.  Reading a message to “Look at the television” is like having Nintendo hit my heart with a bug net.

Overall though, Animal Crossing: amiibo Festival does plenty right, with its general ease of use, cast of quirky characters, and picturesque HD settings.  I’d be shocked if it doesn’t make even the biggest curmudgeons crack a smile.  It’s also the perfect franchise to take advantage of the amiibo craze.  Which in reality is what this game is, a vehicle to stir up even greater interest in the amiibo line.  In that sense, the game succeeds skillfully.

Ultimately your enjoyment will  likely come down to the ability of viewing this less as an Animal Crossing game, and more as a board game.  While the main series of games have shown surprisingly broad appeal, I don’t expect the same from this digital board game spinoff.  The very simplistic nature of the entire package only adds to this.  For older gamers, solo gamers, and those more interested in challenge than toys, the $59.99 price will almost certainly give pause.  However families with younger gamers will definitely find much to enjoy here, as should amiibo fans, and owners of Happy Home Designer.  Though not without its share of concerns, Animal Crossing: amiibo Festival is an undeniably cute game, whose charm has piqued my interest for the future of the series.

For older gamers, solo gamers, and those more interested in challenge than toys, the $59.99 price will almost certainly give pause.  However families with younger gamers will definitely find much to enjoy here, as should amiibo fans, and owners of Happy Home Designer.