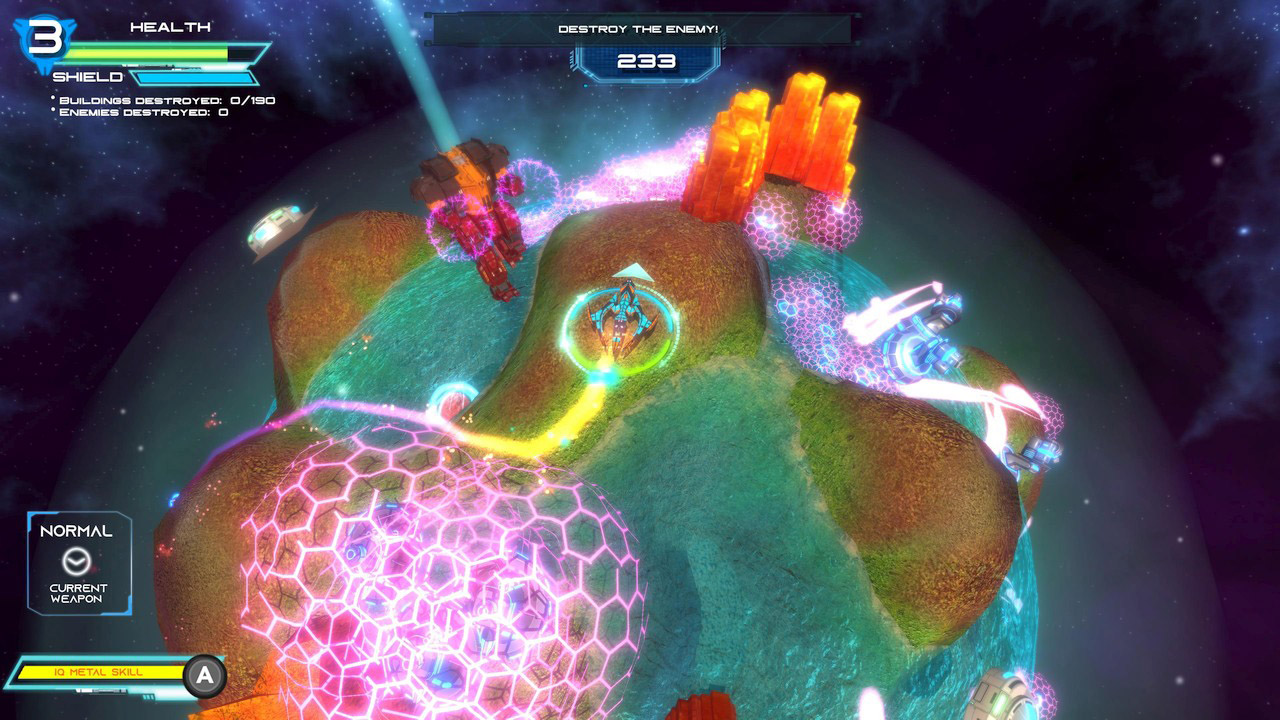 We have a new space adventure for you: Aniquilation. What is it? It’s a sci-fi, space adventure game with lots of shooting bad guys. The game has some interesting points and some disappointing aspects. Sadly, the disappointments outweigh the rest of the game.

In the game, the source of your home galaxy’s energy and technology is a sort of metal called Aniquilation. All of it has suddenly gone inactive, so you are forced to explore new sources of this metal or something which will help keep your civilization going. You find some help in a new galaxy and start to explore. You get to visit small worlds which look like a planetary body, but here’s where a lot of the “fi” in the “sci-fi” comes in. The mini-worlds have some terrain, buildings, resources, and bad guys trying to kill you. You can use your energy weapon, the sword, your shield, and your wits to take out the baddies, destroy targets of interest, and collect the resources. 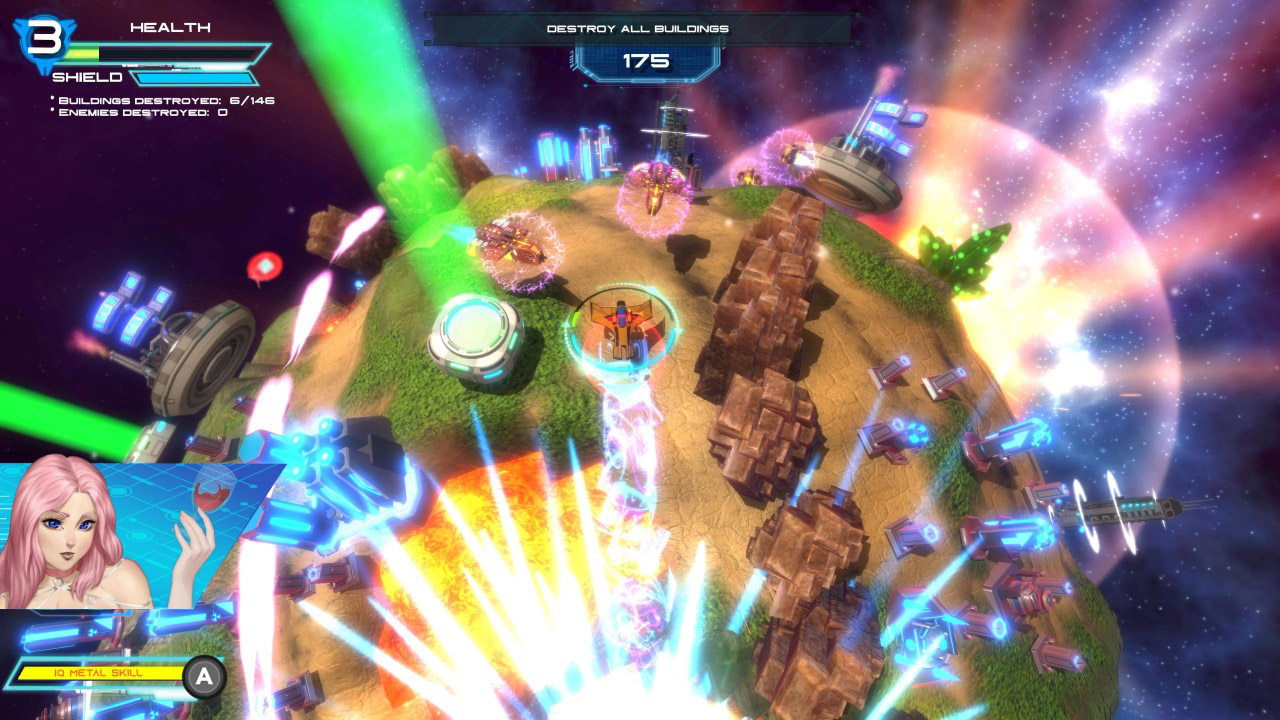 You start each round on a base pad. If you take damage (and you will), you can return to the base pad for a recharge. This is very handy, but the bad guys don’t stop because you are on base, so use it carefully. The mini-world you have to get around is laid out in a winding path which restricts how you can get from point A to point B. This is important when a large baddie is after you; you may not be able to get around it without taking a hit or two.

Between levels (mini-worlds), there is a sort of flying obstacle course. It comes without warning, and it doesn’t make a lot of sense, but there it is.

Here is some of what I enjoyed with this game. The game controls are not complicated and will make sense to the player pretty quickly. The imagery isn’t bad and the use of color and contrast is well done, providing good visual interest and allowing the player to pick out the important elements easily. The audio is OK and works well with the game theme. Gameplay is relatively straightforward—run around and shoot just about everything, and don’t die in the process. You know, tried and true game stuff.

Multiple game modes add some life, and if you’ve got another action gamer nearby, Aniquilation includes a single-system multiplayer option. 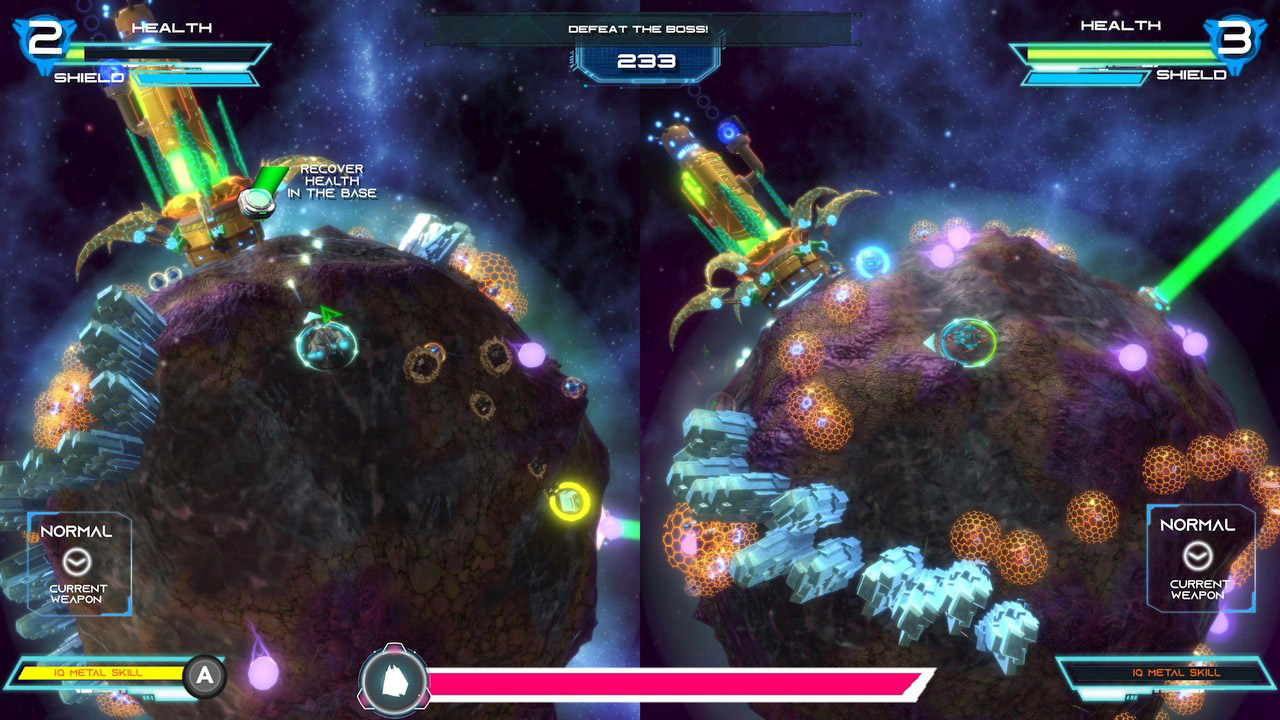 Now, let’s look at where the game could use some help. I’ll start with the text. Reading is one of the better things in life, but when you are faced with all caps for an entire game it gets a bit annoying. Even if we set aside the rules which tell us typing in all caps is yelling, text presented in all caps is actually harder to read. When the game includes a timer for the text instead of the old “press A to advance” option, having limited time to read can become a drawback. 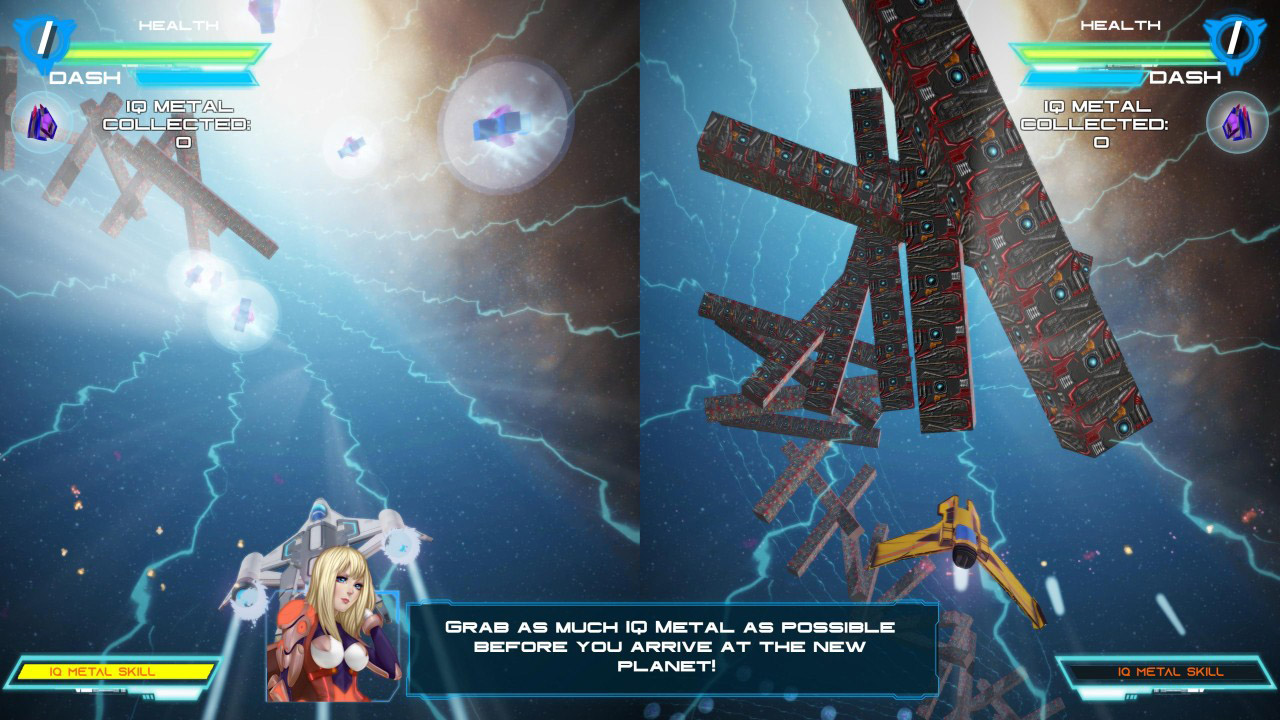 Also, I noticed that either there was a translation glitch or someone didn’t proof the text very well; there were question marks all over the place which didn’t belong there.

I noticed that when it came time to select a character/ship, there was an odd glitch with the ship stats. The first selection is the middle of the road choice—average for all stats. The stats displayed all max values a few times, but when you cycle through the options, the stats return to normal. This raises some questions about what else is going wrong that you don’t see up front but which may affect gameplay.

As for the gameplay, there are some more significant deficiencies. The tiny world as a level concept is interesting, but it uses a torturous path to make all of the elements of the level fit. This leads to some interesting dynamics with energy weapon “bullets” flying around, but the terrain limitations don’t do enough to make this a good tactical element. 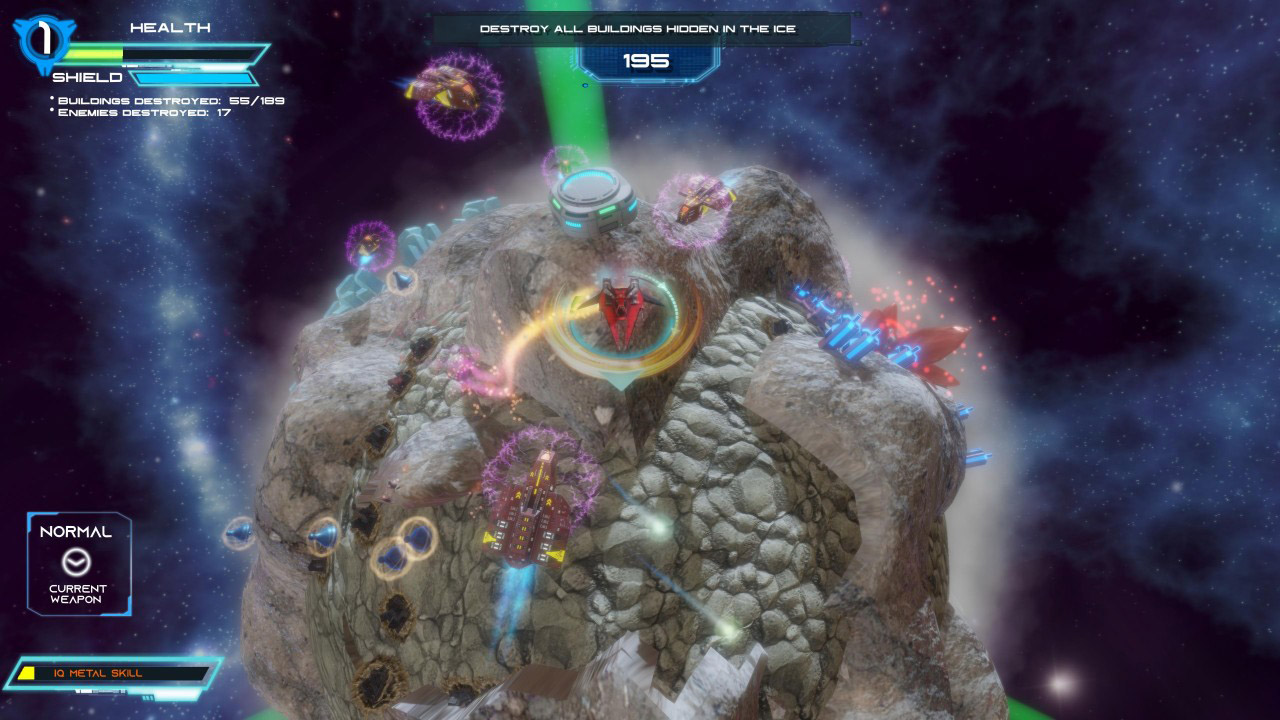 The big bad guys can hurt you fast, but you do have a shield. Too bad the available shield energy drains rather quickly. Your base energy weapon is moderately effective, but there are upgrades, and the upgrade can be lost by touching almost anything or taking any hit from an enemy. This forces you to try to regain your new weapon frequently.

The tutorial is only so-so at best. During it and into the first couple of levels, the game goes over the use of the sword attack a lot more frequently than necessary. It’s a bit like a retailer trying too hard to upsell some feature you already know about but don’t need to have shoved in your face all the time. As mentioned above, there is a flying obstacle course that randomly appears between levels. This comes without warning and without explanation. Also, I had a few instances where the ship’s maneuverability didn’t function so I just hit things until I died. Peachy.

All things considered, I can only give Aniquilation a hearty “meh.”

On arrival, I had a sense of hope and promise for the twin-stick shooter, Aniquilation, but was left with an “oh well” experience. With a little refinement, it has the potential to be a really fun game with some interesting aspects. As it is, the game leaves too much to be desired.