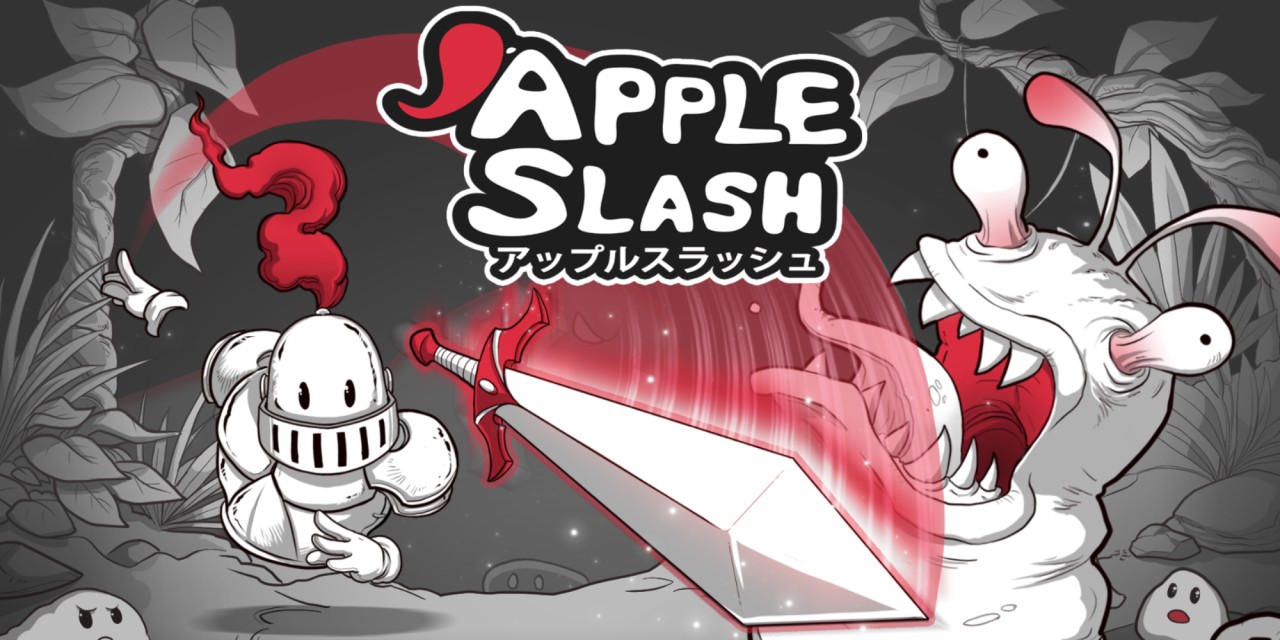 Apple Slash is an action-arcade title for the Nintendo Switch. It comes from Norwegian developers Agelvik and is published by Ratalaika Games. It’s fast-paced and sports a creative visual style as you slash your way through hordes of enemies. Sadly, it’s all over far too soon.

I’ll start by saying that I really enjoyed this game while it lasted. It has quite a lot of positive elements that make it a blast to play. The trailer didn’t overly convince me, but I was hooked within about a minute of playing. It’s amazing how much variety you can summon and emotion you can evoke from three simple colors. 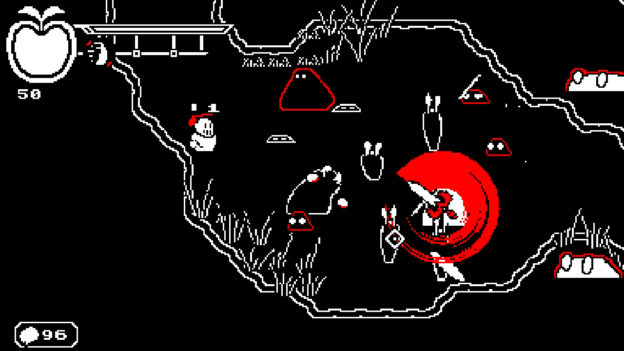 The first thing that sets Apple Slash apart is its simple design. It sports a retro-looking aesthetic that uses black, white and red to convey everything from characters and items to the terrain itself. It seems so basic at first, but it actually works really well.

You play the role of the mighty Apple Knight, who embarks on a quest when his brother notices some evil blob-like creatures attacking the surrounding areas. You wield your trusty sword in a twin-stick fashion. Slashing occurs in whichever direction you point your sword, not your character, using the R-stick. Your character moves with the L-stick. This twin-stick control style is another fun way that this title stands apart.

The music is also great. There’s a subtle beat in the background that fits right in, creating an exciting mood that adds to the adrenaline of a good fight without distracting or annoying you. There’s even a little unlockable section with a cute band that plays for you. Whatever happens after that, I simply can’t explain. It’s an odd twist that’s basically left unanswered, but I won’t spoil it for you by spelling it out. 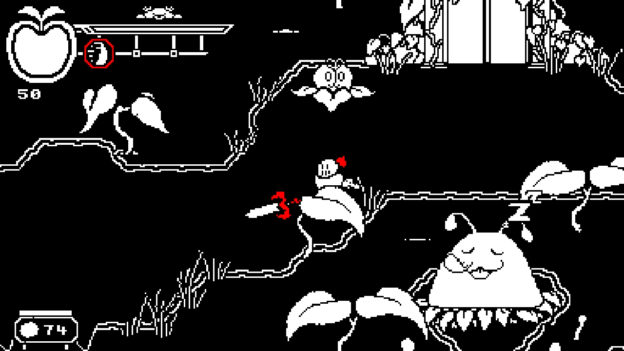 Needless to say, there’s good use of humor as well as heart. For example, along the way you run into an old man who has lost his son. Finding him is one of the goals of the game. The result is touching, and it highlights how well a story can play out even in the simplest of titles.

Apple Slash isn’t easy, though, particularly at first. There are countless enemies springing up all over the place – sometimes a crazy amount that seems impossible to defeat. They also respawn after 30 seconds or so, making repeat visits to an area tricky. You unlock several power-ups along the way to help with this, like a giant sword that drops from the sky. These are super fun to use, especially in a combo.

I loved the boss battle, which had me on the edge of my seat for a little while. It took a few goes to defeat him, but it was a satisfying win. I had thought this would be the first of many such fights; sadly, it was the first and last. 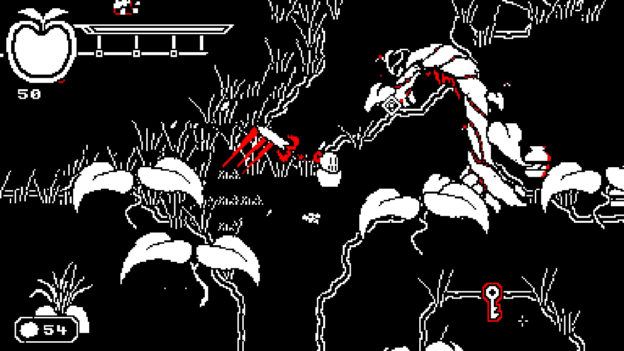 There’s so much to like about Apple Slash; it’s such a shame it wraps up in an hour or two. I finished the game – including all extras – with merely 1 hour and 19 minutes on the clock (there’s a handy timer on the pause screen). It feels like this adventure is just warming up by the time it ends. In fact, your character literally hops onto a boat for his next adventure. I mistakenly thought we were heading to the next level or world only for the credits to start rolling.

It’s not expensive, but at $4.99 I’d expect a little more. I’d really like to support this developer by encouraging readers to download this game, but it’s all over so quickly. If you feel like supporting an indie developer and have the spare money, give it a go. If not, wait for a sale and pick it up then.

Overall, Apple Slash is incredibly fun but over way too soon. It has great tunes and a simple black, white and red aesthetic that works well. It even has humor and heart in its short story that helps to connect with the player. If it only had longevity, I’d rate this one much higher. As it is, it’s absolutely worth playing but doesn’t quite justify the price. If you see it on sale for a dollar or two, grab it quickly, though.

Apple Slash is incredibly fun but over way too soon. The visuals and soundtrack are a treat, while the short story has humor and heart. It’s absolutely worth playing but doesn’t quite justify the price. If you see it on sale for a dollar or two, grab it quickly, though.