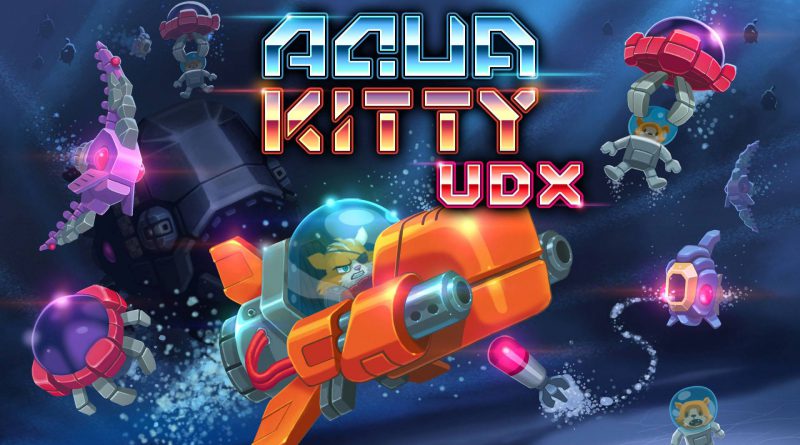 Cats and water don’t mix well in real life, but that certainly doesn’t stop Aqua Kitty UDX from showing what’s possible with this feline-centric aquatic arcade shooter. Developed by Tikipod, Aqua Kitty UDX centers around a group of cats who mine milk on the ocean seabed due to a global milk crisis. From here, you will control a kitty in a submarine as you zip back and forth horizontally to defend your fellow milk-mining aqua kitties from being captured. As perplexing as the “synopsis” sounds, it really isn’t that important other than to know in Aqua Kitty UDX that somehow cats have conquered their fear of being submerged in water. However, is the experience of a Defender-esque shooter featuring deep sea, milk-mining aquatic cats enough to keep you interested aside from nostalgic callbacks? Well, somewhat; but not to the point that it reinvents the wheel. 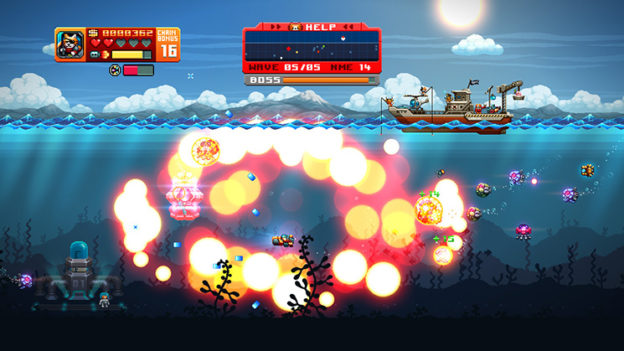 Aqua Kitty UDX has three modes for you to tool around with, and each offers a slightly different variant but with similar levels. In Classic mode, you are tasked with clearing a world map filled with wave after wave of cybernetic enemies that want nothing more than the precious milk you are mining. If you somehow lose all of the cat miners, you will have to restart the level, which isn’t too much punishment considering each stage lasts only a few minutes. 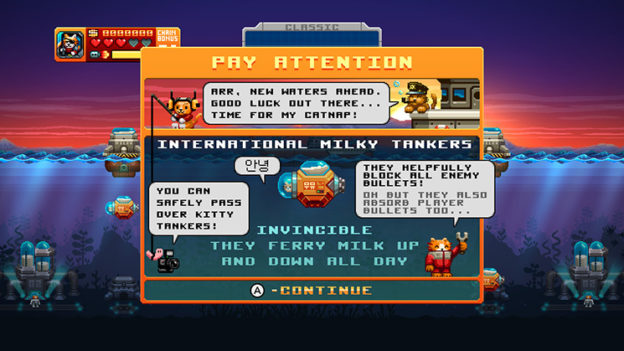 Your submarine comes with two firing options: single fire and a triple shot. In addition to those, power-ups can be claimed by destroying drones that change color. Each color represents either health, bombs, or assistance. Many of these power-ups have their advantages, so it’s best not to get too greedy as one may come in handy against vast waves or a boss fight. Still, expect to die a lot if you aren’t paying attention to either enemy placement or when your fellow kitty milk miners have been captured. Classic mode can be best described as procedural by-the-numbers arcade shooter fun, yet it gets rather dull as you progress. Sure, the difficulty curve is fair in most parts, but you begin to see it drag quickly. In a way, it can get rather forgettable. 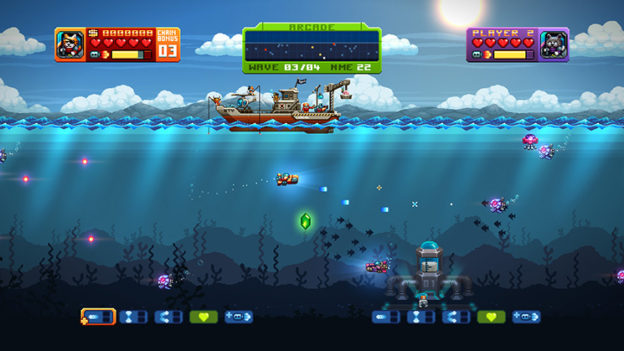 The second mode included is Arcade mode, which is essentially the same as Classic but you only have one life. Also, power-ups are relegated to purchases via points you earn from defeating certain enemies. This mode ups the challenge a bit, but much like Classic, it’s more of the same. If you are one who enjoys online leaderboards and such, then these two modes should offer you a bevy of time and energy to best your own score throughout each grueling stage. If not, then the additional two-player co-op mode is enough to spice things up.

Finally, there’s the Dreadnought mode, which is new to this version of Aqua Kitty. With Dreadnought mode, you are no longer solely tasked with just protecting your fellow kitty miners. Instead, you will also be faced with a pure offensive onslaught that you may be accustomed to from some classic bullet-hell shooters. The enemies here in this mode are in greater bulk which leads to battling a multi-screen enemy craft. It’s chaotic, fun, and really saves the entire package from being a total downer. Even though each of these modes are rather similar in design, the Dreadnought mode does a lot in fleshing out one’s arcade shooter skills. My only other piece of advice comes in the form of how you should play Aqua Kitty UDX. That is, playing via the Switch’s handheld mode is serviceable but can be difficult to make out some of well-polished, yet tiny sprites. Playing via docked mode is recommended, especially when playing through Dreadnought’s various waves of enemy fire. 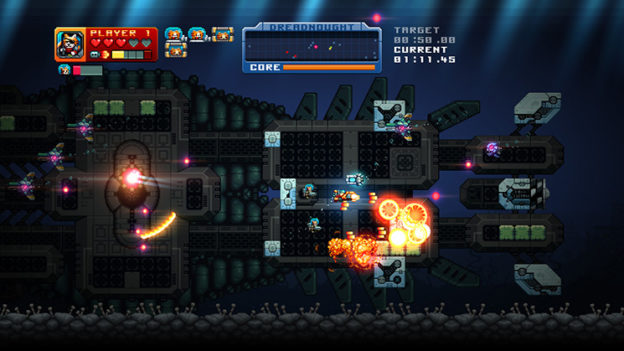 Aqua Kitty UDX for Nintendo Switch is a surprisingly fun title that harks back to classic arcade shooters, but it lacks in both overall package and replayability. The newly added Dreadnought mode does off some needed tension and challenge for those who adore the genre; however, it all feels too lacking in certain areas. While Aqua Kitty UDX may give hardcore arcade shooter fans a quick fix, everyone else who isn’t interested in chasing high scores may be left with little to grab onto with this one.

As a cute callback to classic arcade shooters, Aqua Kitty UDX has it moments, especially with its intense and addictive Dreadnought mode. But unless you are someone who adores the genre and has a knack for high scores, then there really isn’t much depth to keep your eyes glued for long.