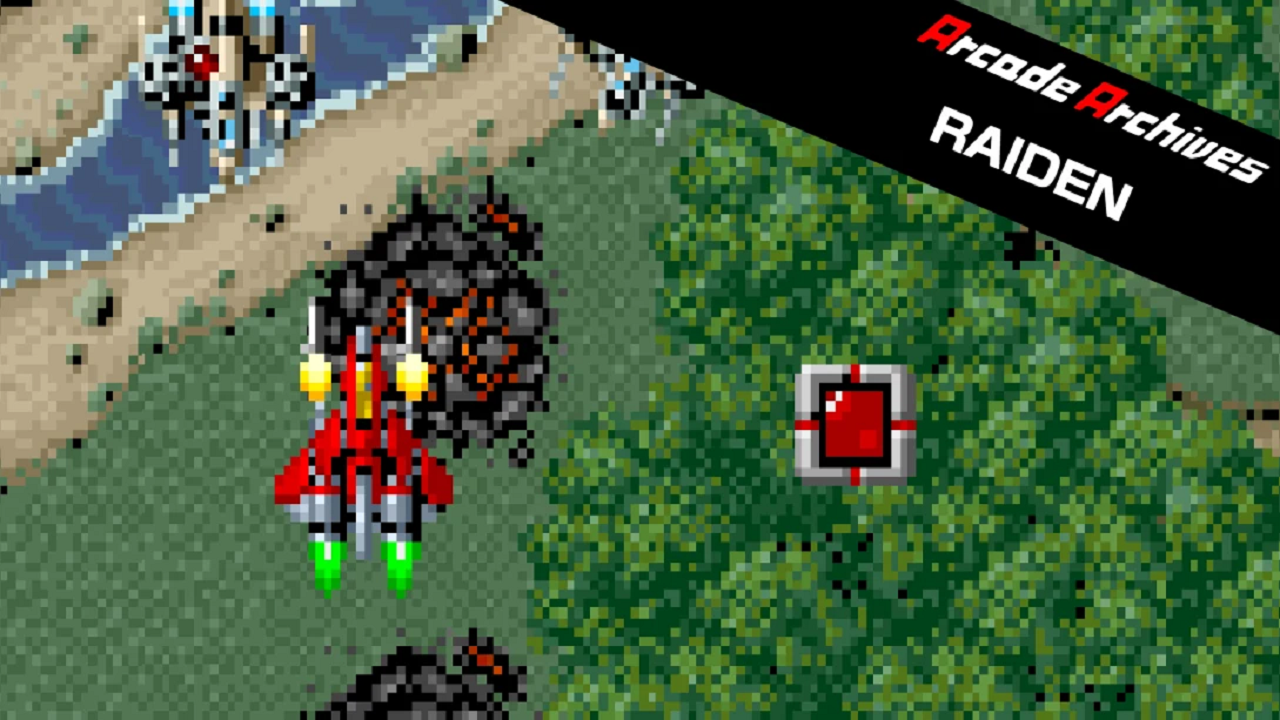 Arcade Archives RAIDEN is a superb shooter in many ways. If you enjoyed the popular arcade original as I did, you’ll likely welcome this chance to revisit the classic.

You control the titular supersonic attack fighter to defend an Earth under siege by combatant aliens. A thin plot, but is any even needed? Less is more here. Stop the galactic pirates and save the day.

These aliens attack from all directions. So, if you think you can camp near the bottom of the screen, you’re in for a surprise when the baddies slide up from below. One hit is all it takes for your ship to explode. These aggressive threats combine with quick firepower that you can lose track of in the heat of the moment. RAIDEN was always challenging, but with my rust, it’s even tougher than I remember.

Don’t be afraid to change the default three lives to five. Also, adjusting the display to a less vertical one might help when your ship seems a tad too slow. HAMSTER has the usual options so that newer players won’t get turned off. Of course, the best way to lessen the challenge is to bring a friend in for the great two-player mode. Playing as a duo also gives the game fun replay value, as you can be cooperative and competitive in tandem.

Your weaponry consists of a spread shot or a laser, represented by red and blue icons. You can level them up, but be careful if you grab a different color as it resets. If playing with a friend, try to have one player focus on each color for diversity. Treasure those rare instances when your weapons are maxed!

Bombs, missiles, and point icons can also be grabbed among the chaos. One of my key strategies is dumping a bomb the instant before my ship gets hit, which is much easier said than done. It might lessen points, but it ensures less waste. High scores really only matter if you are looking to climb the leaderboards. These HAMSTER additions give the game extra legs for solo players.

For a release from 1990, RAIDEN still has an appealing look. It’s a sharp-looking game, although some detail can be lost amidst all the on-screen action. What’s always impressed me most is the variety as you work your way from Earth to the blackness of space. On the audio end, the sound effects are just okay, but the music is quite memorable. It’s a good fit for the flavor of the game.

Arcade Archives RAIDEN brings the challenging and time-honored shmup to the Nintendo Switch. With HAMSTER’s extras, this is as good a time as any to revisit it or check it out for the first time. It’s an oldie but a goodie. It comes highly recommended, especially in co-op.

Arcade Archives RAIDEN brings the challenging and time-honored shmup to the Nintendo Switch. With HAMSTER’s extras, this is as good a time as any to revisit it or check it out for the first time. It’s an oldie but a goodie. It comes highly recommended, especially in co-op.