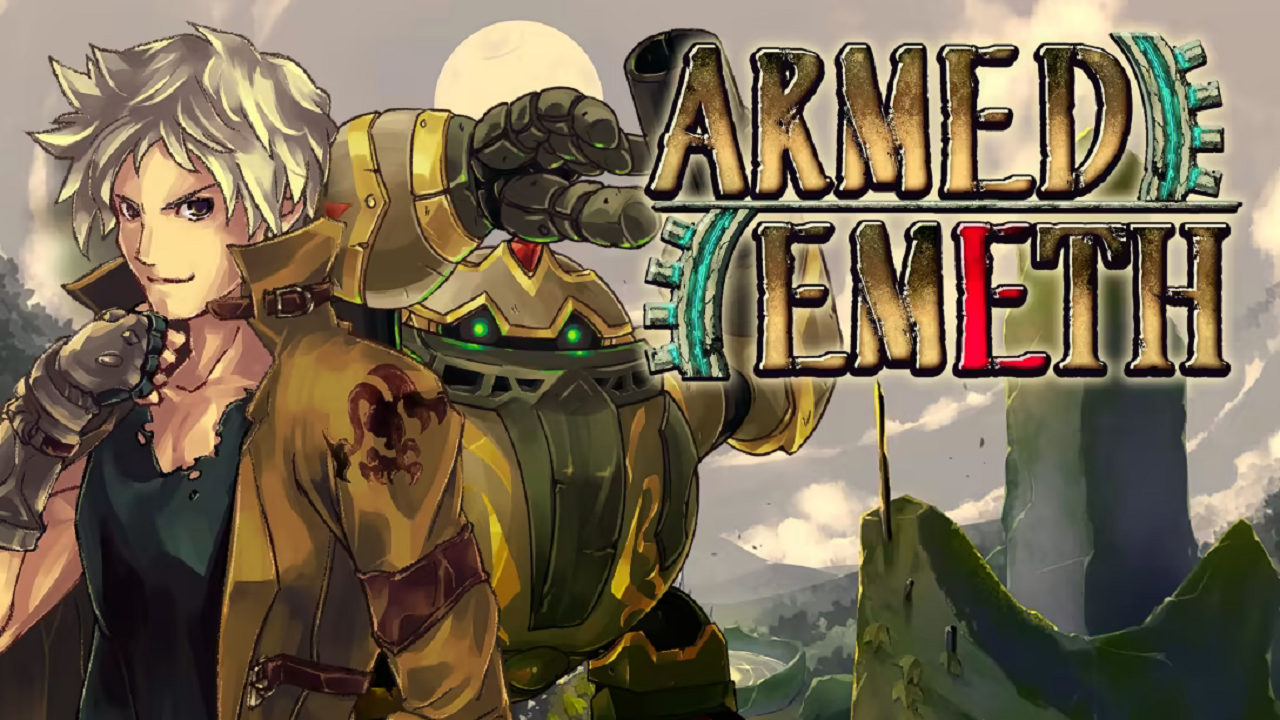 Armed Emeth has a lot going for it. KEMCO has been pumping out these old-school 16-bit style RPGs for years, and while I haven’t seen any achieve notable success (don’t stone me if I’m wrong!), this one could easily become a cult classic. It has a good combination of ideas, a little Phantasy Star, a little Cyberpunk, and a lot of fantasy. KEMCO has done it.

Without telling you the whole story, Armed Emeth is set in a post-apocalyptic world. The previous civilization had advanced tech and, through war for control of the tech, caused one of its moons to collide with the planet causing mass devastation and destruction. Many years later is where the protagonist, Valess, starts his adventure. The story isn’t overly complex, is easy to follow, and so is the dialogue; it’s not FFVII.

Now Armed Emeth won’t raise the bar in any way for JRPG’s, but what it will do is entertain you. It has a basic turn-based menu-driven combat system, an absolute staple in the retro-style RPGs from the 16-bit era. It really shines with its customization of the playable characters. Along with Valess, you’ll meet and group up with other NPC’s. There’s no shortage of gear combinations; weapons and protective gear can have stat enhancements that protect from various things or add status effects to your attacks. Your Golems can not only be geared up, but you can also take them to mechanics that can adjust and modify your stats at a cost and with limitations. A nice game mechanic is you can only enhance your golem so much. It has limits, and if you overdo it, you can essentially break it or make it very fragile. This mechanic keeps things balanced, so no one player’s overpowered.

The visuals are something the SNES could have pulled off, but I like that. They’re colorful and cartoony with good presentation. It’s a retro-style game, not Far Cry. As I said, it’s not going to break new ground, but it does give a nod to an era of gaming that I personally loved and grew up with *All the nostalgic feels*. The music, however, is a level above the 16-bit chiptunes of the day. I can’t honestly say that the music handles all the settings well, but it gets the job done. It’s well composed and not bad at all. I just find in certain areas things are a bit too happy sounding when they clearly shouldn’t be.

The other area where I’ll complain about is the menu system outside of combat. I find it very cluttered, and while not difficult to navigate, it’s not neat and organized like most JRPG’s. It’s busy with a lot of information that doesn’t really help. Another thing is, after over 11 hours of playing, I still haven’t figured out what the GLP currency’s used for!

Those few things aside, this is a fun title. Most JRPG themes revolve around dungeons and magic, and other things. So when I see sci-fi-themed games like this, I kind of gravitate to them as they are refreshing and different. Come on, who doesn’t like blowing up bad guys with giant mechs and huge guns? In 1992 this game would have been great. Come on Kemco, make a modern version of this game.

Armed Emeth isn’t pricey, and it’s an entertaining retro RPG for all ages, with a good presentation and a decent story.