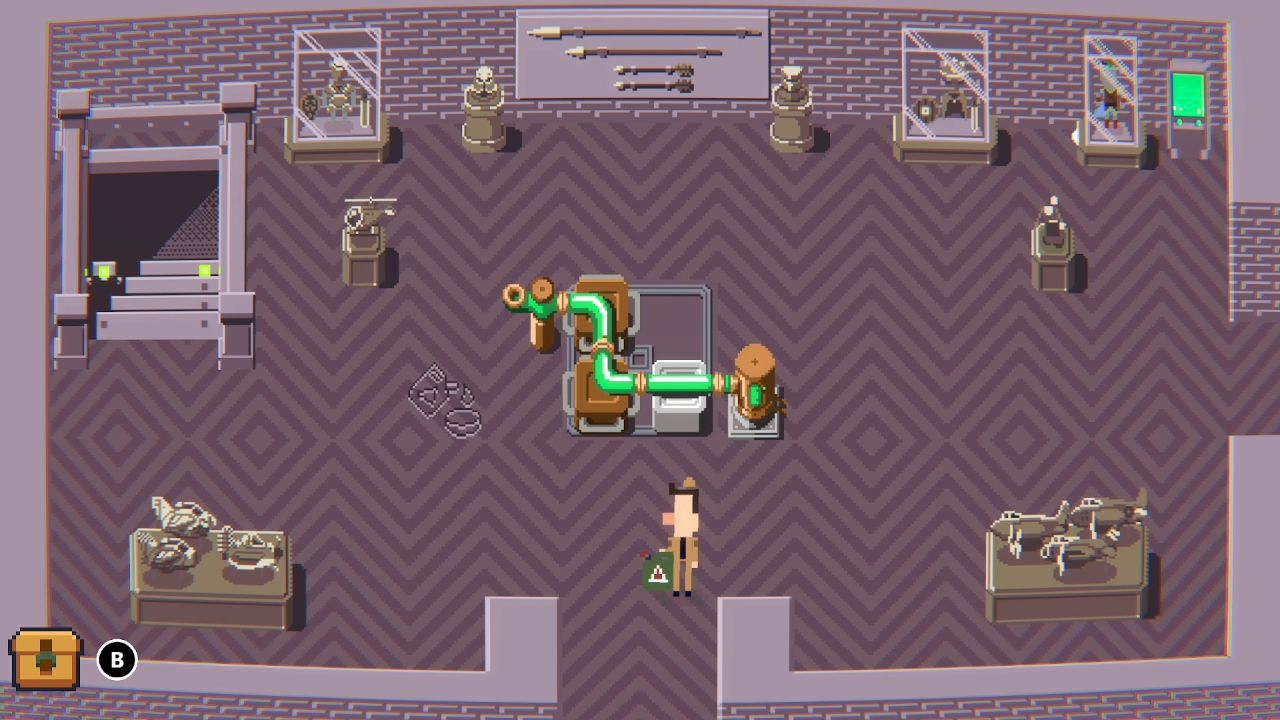 I absolutely love the concept behind Atari Mania, a new microgame mash-up that turns the company’s popular titles into Warioware-style chaos. I’m a bit cooler on the execution. This is perhaps because I experienced many of these games first-hand, and can therefore see what they could have done with this concept.

I’ll let you decide if I’m being fair. Atari Mania begins with you playing as the caretaker of the Atari Game Vault. 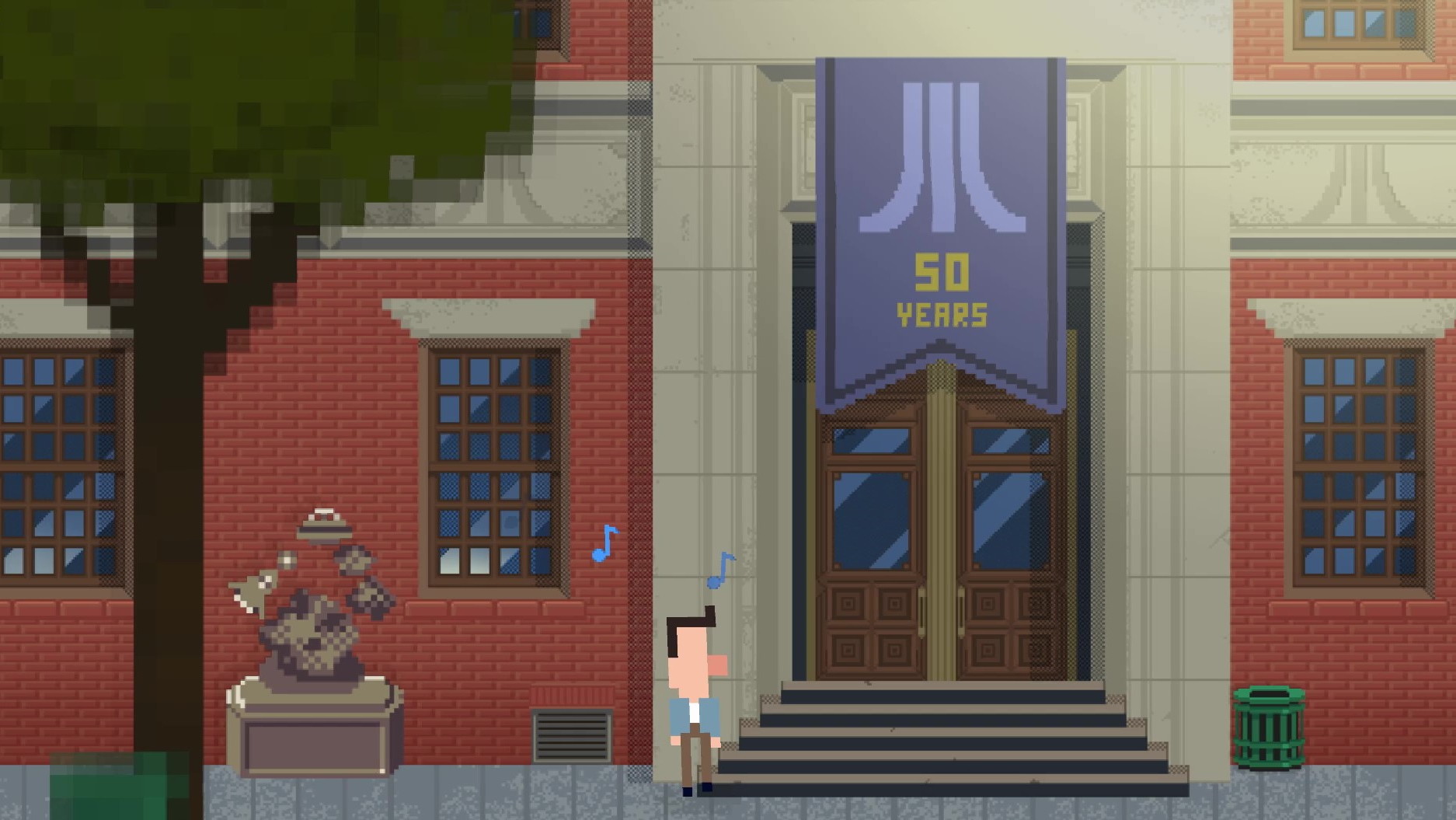 One night you discover a dead pixel that quickly grows to suck in elements from classic Atari games. Although your job description appears to focus solely on sweeping, you jump into the warp zone to save the games and return normalcy to the workplace.

Each zone you enter mashes up the gameplay of the titles sucked into it. An earlier level that should be familiar to everyone, for example, sees you attempting to eliminate a Centipede with a Pong paddle. Get it? But you’ve got to do it quickly. Each task requires quick thinking and quicker execution as you’re always facing down a timer. You’ll need to clear out a string of these microgames, culminating in a boss battle of sorts, without failing too many times. If that happens, you’re kicked back to the Vault and have to enter again from the start. 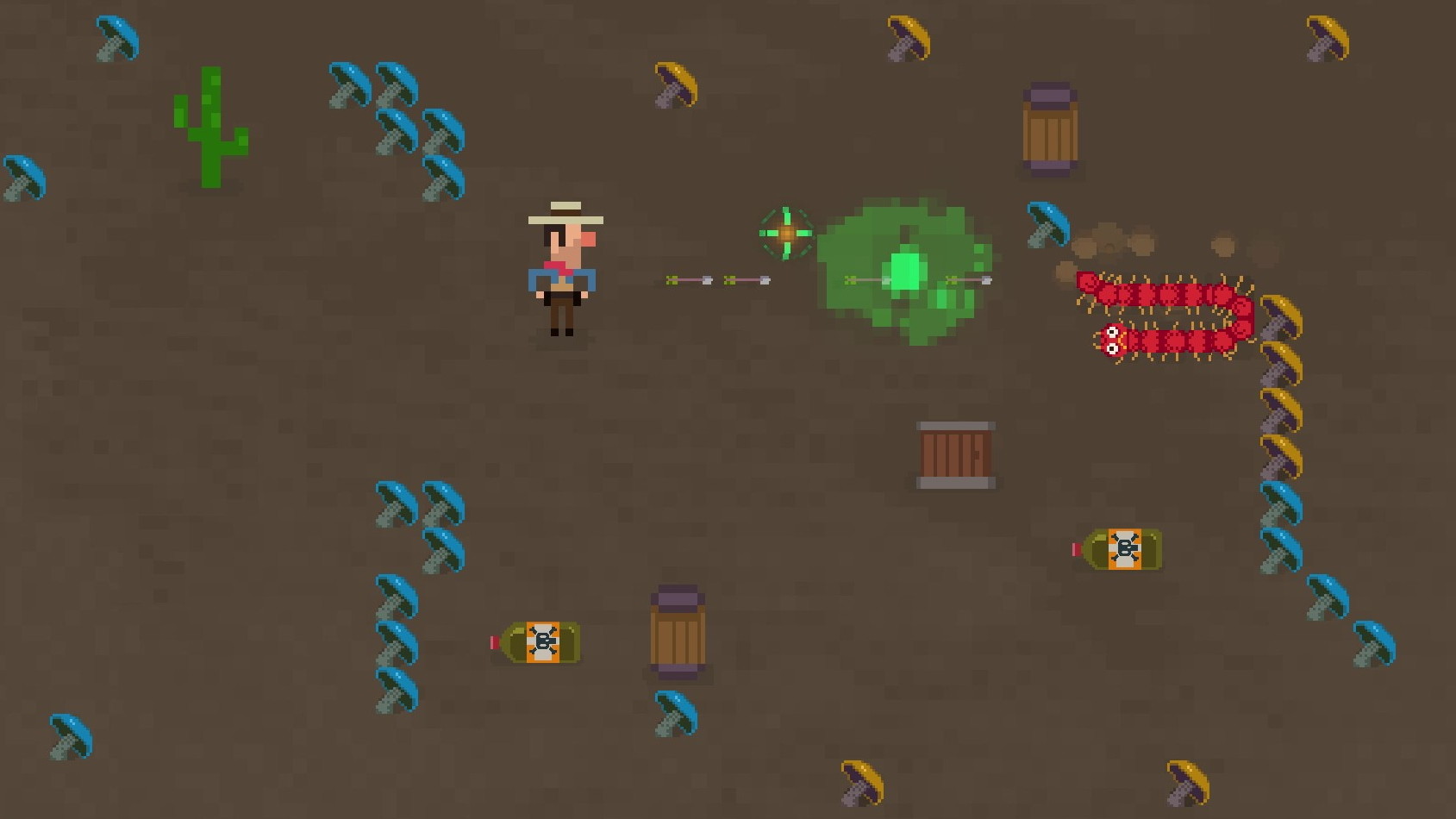 While we’re out there, let’s talk about the Vault for a minute. There’s more to do than just move between dead pixel areas. You’ll have to solve puzzles to access various areas, many of which require you to be carrying/using the proper tool, also from popular Atari games (I recognize that magnet, thank you). You can also access additional challenge levels, find hidden game box art and manuals, and so on. It’s a retro fan’s 8-bit dream, really, even if most of the items you uncover don’t contribute to the gameplay. Taking the time to read them just slows things down.

Anyway, moving through the Vault is a fun diversion from the frantic gameplay, and I appreciated the puzzles that must be solved to push forward. A couple of them stumped me for a bit, but never so long that I had to give up in frustration. It’s also fun to see the characters react to what’s going on and to anticipate how they’ll be used once inside the dead zone. 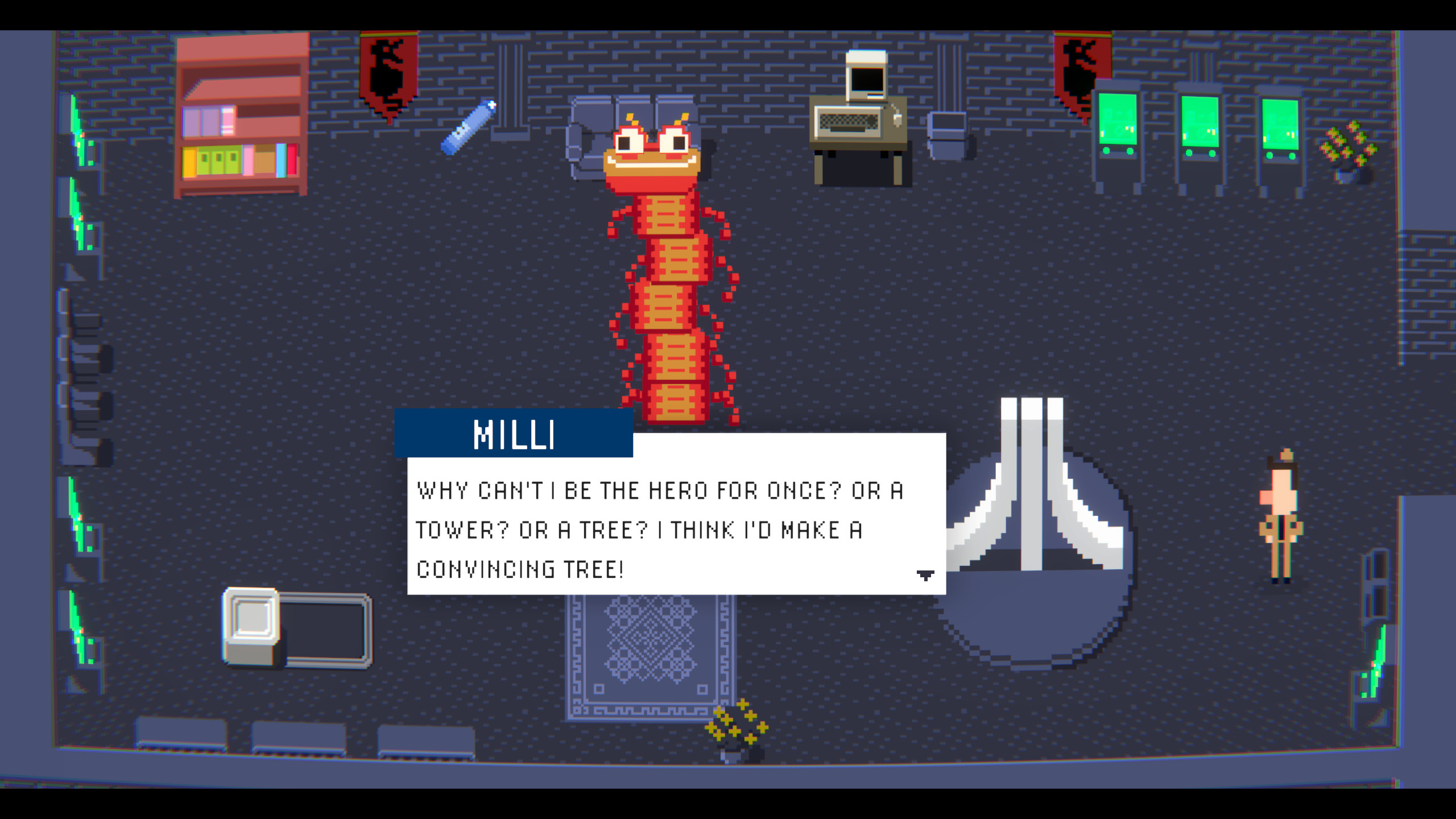 But that’s where I was let down a bit. Too often, the tasks presented by the mash-up are simply to move from here to there without being hit or to keep something in play for a set period of time. The benefit of this approach is the tasks are easy to grasp and quick to play. The drawback is that there’s a lot of repetition despite there being over 150 microgames.

That problem is exacerbated by a surprising degree of difficulty. The goals themselves aren’t terribly difficult, but they are unforgiving; you’ll fail if you make even the slightest error. This means you’ll end up playing the same level many times before progressing. That’s a drag, considering the real joy of Atari Mania is seeing what games will appear next. 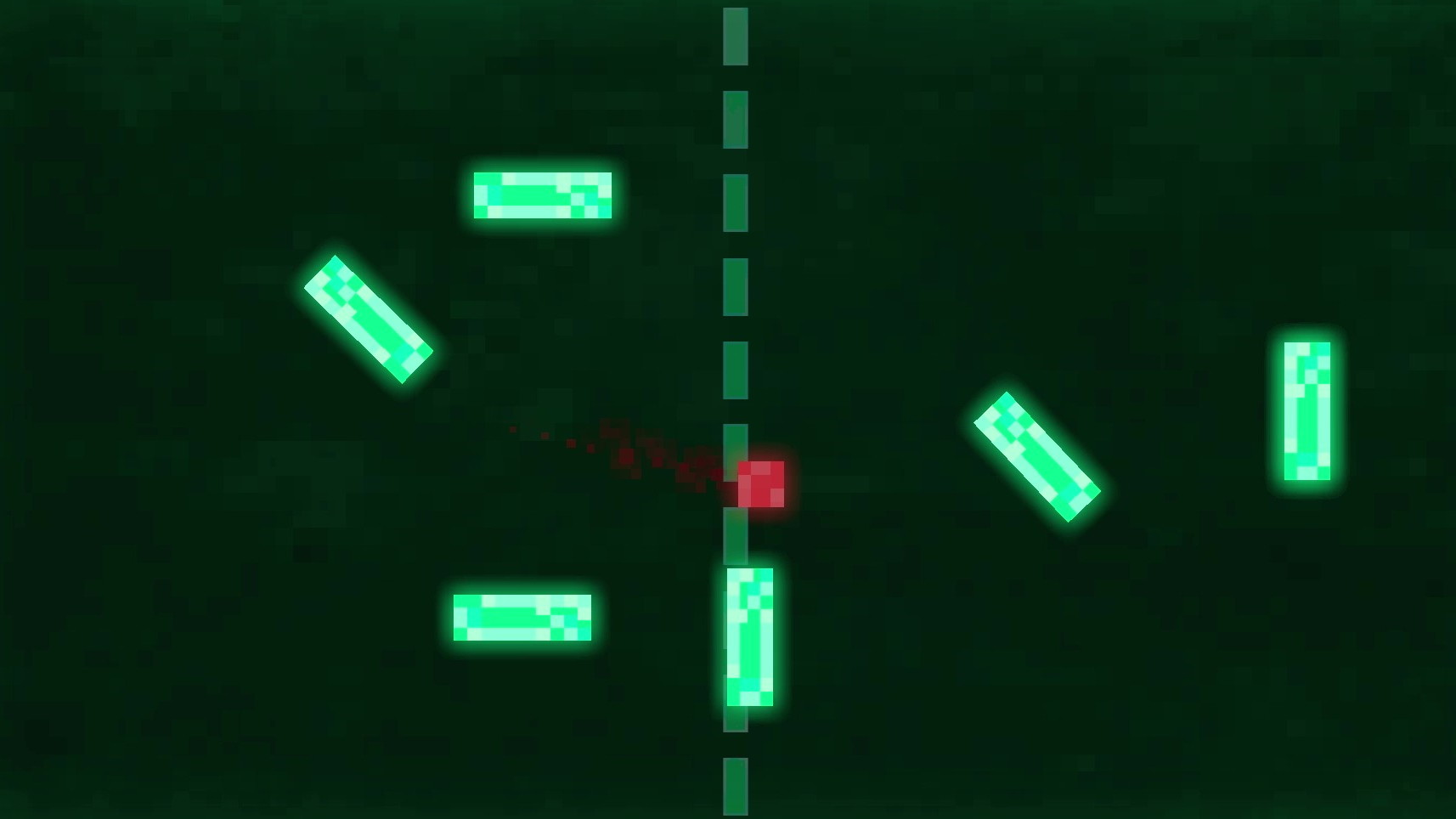 Every now and again, however, you’ll get a level or series of microgames that are a complete joy to play, especially if you have a history with them. Games I’d long since forgotten make appearances, causing the nostalgia waves to crash hard against the breakwaters of my youth. And although the microgame approach gets choppy, I prefer that over playing faithful updates to most of these games, most of which don’t stand the test of time. Video games in the early ’80s weren’t meant to be played individually for hours at a time. You played one game for 10 minutes, got bored, and put in another one. When you worked through your whole library, you went outside or turned on Spectreman. Atari Mania understands that.

It also understands the visuals, for the most part keeping the blocky visuals of the original games. The characters and gameplay elements look the way you want them to, and Atari did a nice job of integrating games from different eras. 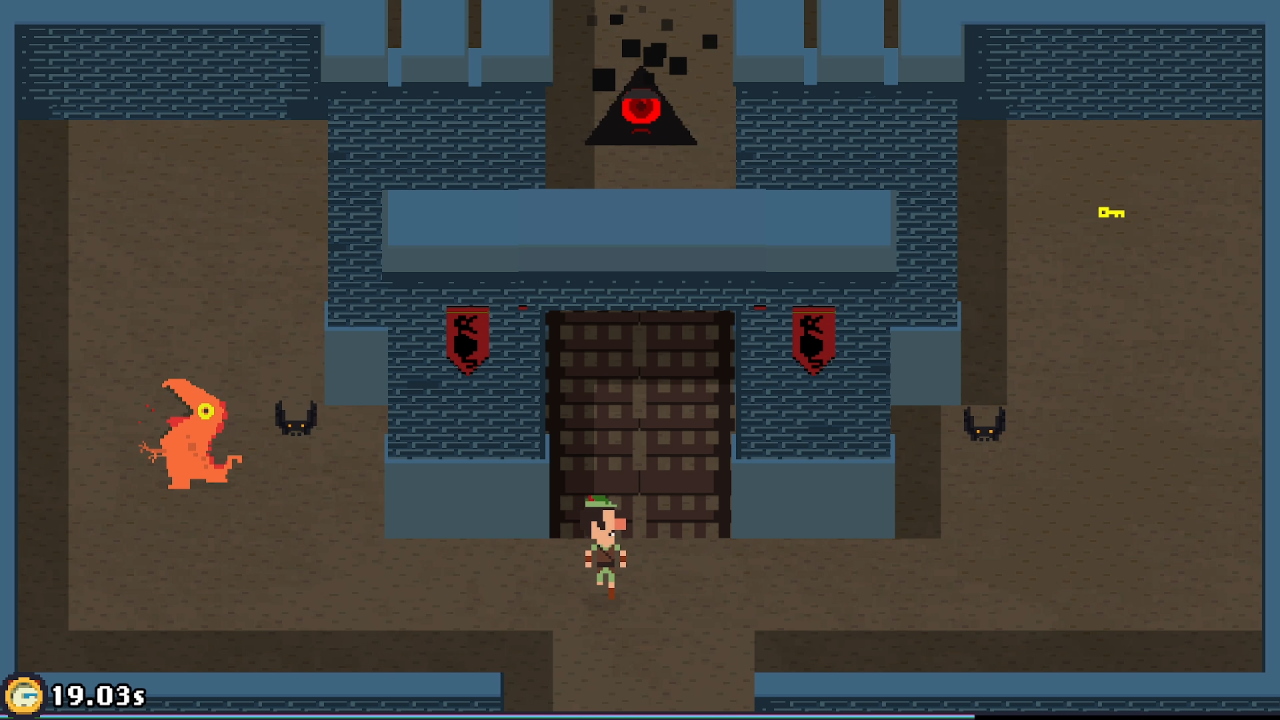 They did even better with the chiptune audio, which has been remixed as well.

The whole package comes together nicely, but I’m not sure how much fun it’ll be for those who didn’t play the original versions of these games. Atari Mania is carried by nostalgia, and it doesn’t have the legs to make it through without it. I wonder if the corrupt vault concept would’ve worked better as impetus for a straight adventure through Atari’s history as opposed to a way to serve up microgames—something more akin to Pong Quest. That game didn’t work because Pong’s gameplay is too basic to build an adventure around it. With the multitude of games here, that wouldn’t have been an issue.

A bigger drawback is that Atari Mania is single-player only. Anyone who has played a Warioware game knows that microgames are more fun with two people.

You perhaps shouldn’t let these faults (or my review) dissuade from playing Atari Mania, however. If you spent your childhood huddled in front of a 2600 and your rich friend’s 25″ TV, this game will have you looking up that friend on Facebook. Those without that connection, however, will likely have more fun working through Atari’s series of “Recharged” games.

Me? I’m going to quit my job at the Vault and see if I can find work across the street at Intellivision. Seems to me they’re in sore need of a quality caretaker.

Atari Mania’s mash-up of microgames presents a chaotic blast of nostalgia, but the general repetition and some frustrating difficulty dampen the mood pretty quickly. Its unique approach to retro gaming is, therefore, best enjoyed by those with fond memories of playing all these games back in the day.