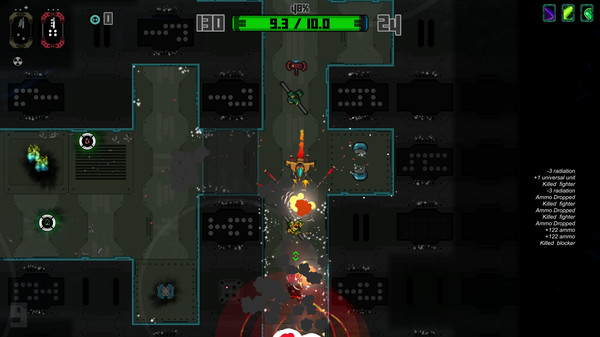 A simple game with a clear objective, Atomic Heist has all the right ingredients for a solid sci-fi roguelike.

You have to pilot a spaceship escaping a space station overrun with enemy craft. The nuclear core is leaking radiation. You have to safely flee through randomly generated levels, collecting power-ups that reinforce your ship and your ammunition.

The tutorial is clear and simple without being patronising. You start crossing very simple platforms, getting used to the twin-stick controls to fly your ship and the shoulder buttons to fire. You shoot crates that drop power-ups and ammo. The main obstacles stopping you from reaching the exit are enemy ships, which come in a variety of shapes, sizes and firepower. You have to keep track of your health via a meter in the top left corner of the screen. 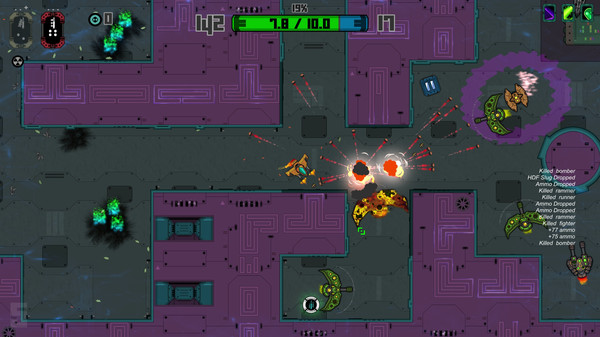 You also have to make sure that you don’t get radiated by the leaking nuclear core at the heart of the space station. There are areas where you can heal, but waiting to get disinfected can leave you open to attacks.

Atomic Heist begins with a couple of easy levels but then it drops you into the heart of the action almost immediately. Enemy ships are powerful and don’t take it easy on you just because it’s your first run. Luckily it’s simple enough to pick up, so you can give as good as you get almost as soon as you know the controls.

If you read the backstory around Atomic Heist, you can tell that a lot of effort has gone into crafting it. Every different ship has a cool futuristic name and the world has a long history of peoples at war with each other. Not a lot of the story is hugely present in the game, but having it told even separately is still a nice touch. There are snippets of it scattered throughout the different levels, so you could piece it together if you played a lot of the game, but it’s equally something you could miss if you weren’t looking out for those details. 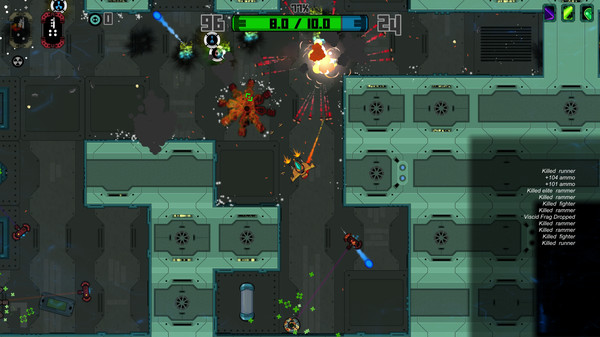 As with any good roguelike, Atomic Heist gives you new modes to challenge yourself with each day.

For a simple sci-fi roguelike that costs less than $10, Atomic Heist does everything it needs to. It’s cute and explosive and has enough interesting and challenging levels to keep you occupied for as long as you feel like blowing up spaceships.

Atomic Heist is a simple roguelike with a cool sci-fi story and all the colourful explosions you could wish for.