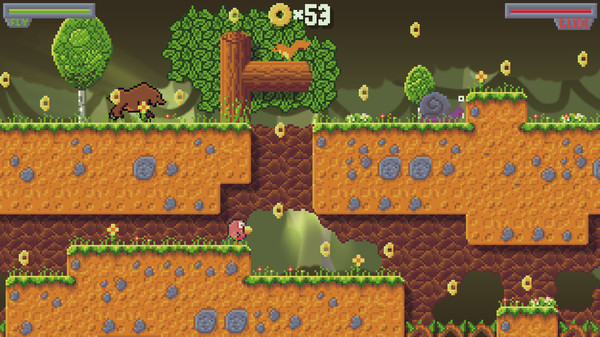 A simple game inspired by early side-scrollers, Avenger Bird is basically what you’d expect from a retro-style platformer that costs about as much as a coffee.

It has cute, calm music and colourful 16-bit design that is reminiscent of games from the ‘90s. This offers a decent amount of nostalgia value for anyone looking for something with the aesthetic of their childhood games, but an original premise.

The story is told through a brief opening animation. You play as a mother bird. While you are out fetching food for your newly hatched chicks, your babies are kidnapped by an eye-patch wearing predator bird. Your mission is to track them down and bring them safely home. 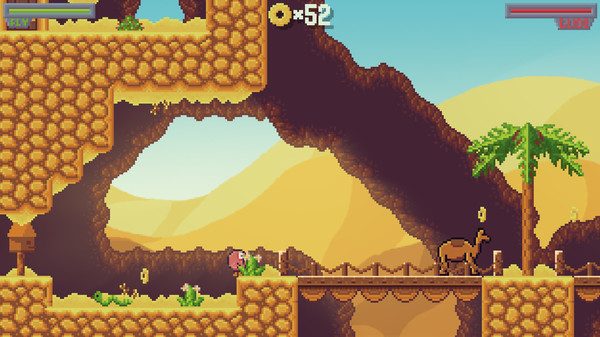 You travel from level to level, collecting coins and gems that you can use to buy your passage into the next part of the world. It is simple enough to get through the early levels. You move sideways through the world, pressing one button to jump into the air and another to glide once you are airborne. This lends some purpose to the fact that you’re playing as a bird, and also gives you something more to think about than you might expect from a traditional platformer with basic run and jump functions.

These controls are still very simple. The tutorial is quick and you get right into the game in no time at all.

The challenge comes in working out the best way to reach platforms in tricky places, particularly when they hide coins that you need to reach the end of the level. You also need to avoid aspects of the world that will kill you, which range from naturally occurring dangers such as thorns to other creatures, all of which are threats. 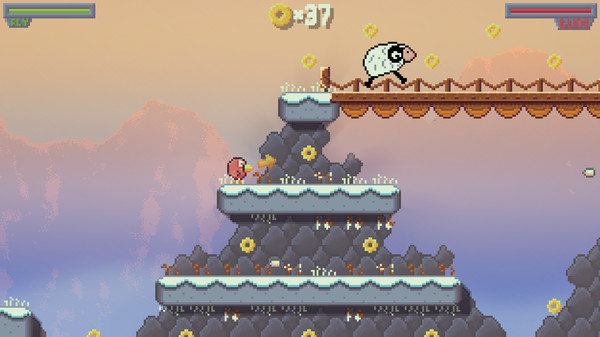 The design of Avenger Bird means that it can sometimes be difficult to tell the difference between normal safe grass and thorns that will cost you a life. There are also some animals you’ll come across in the wild that don’t bear any resemblance to real-world creatures. They are entertaining though.

This doesn’t have a huge impact on the overall experience of the game, though. If anything, it adds to the faux nostalgia of the game. The ‘90s definitely had a lot of weird looking background characters that ranged from being unusual interpretations of nature to the genuine stuff of nightmares.

Avenger Bird isn’t the most gripping or challenging game you’ll ever play. But it does what it sets out to do it. It’s a fair tribute to platformers from back in the day and it’s decently entertaining, particularly for such a low price.

It won’t ever be known for its depth of plot or skill, but Avenger Bird is a fair enough game that adds a touch of nostalgia to the basic platformer structure.