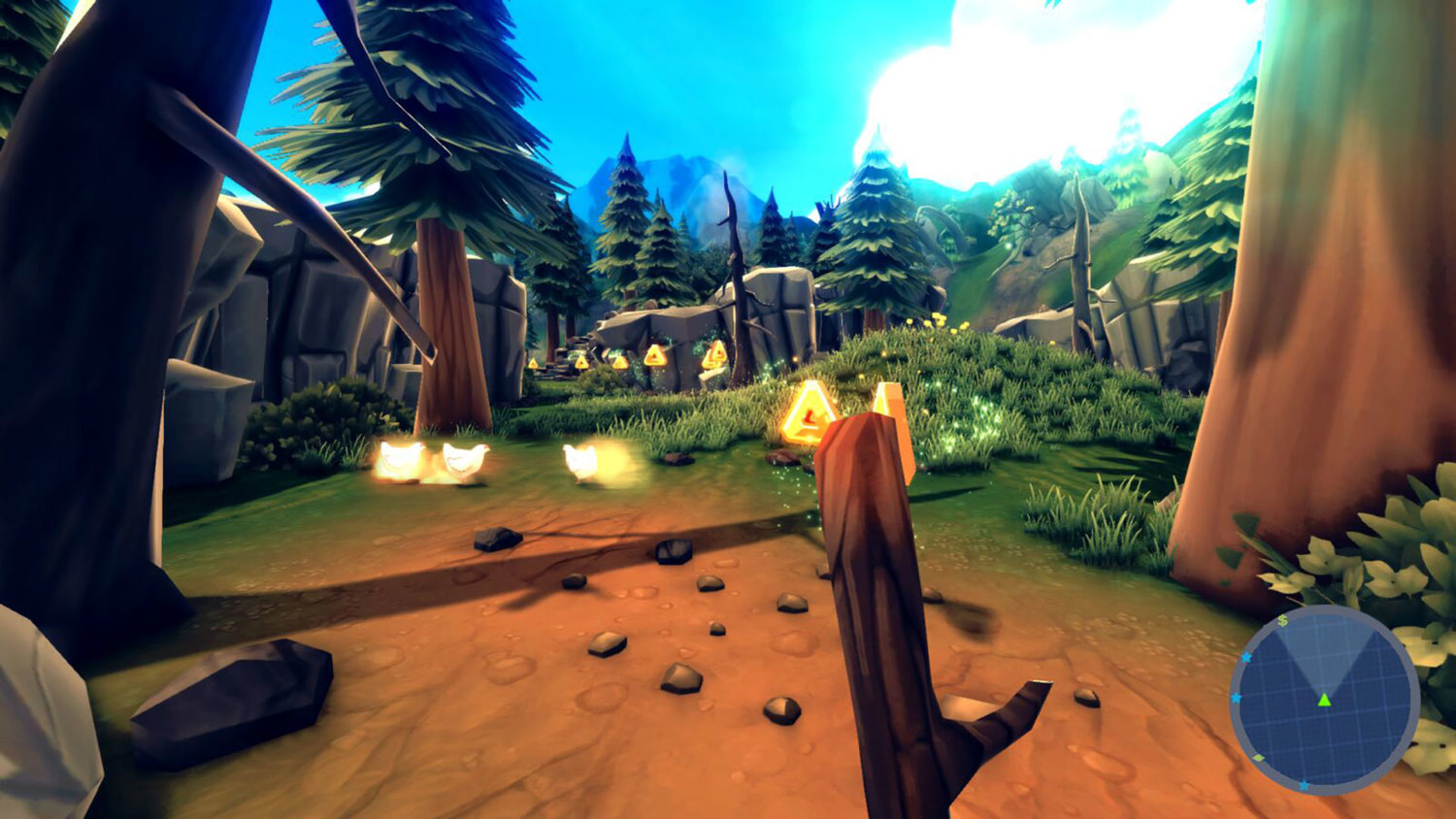 AWAY: Journey to the Unexpected sees players embark on an adventure focused on recruiting unlikely allies and venturing into the unknown. The game is very light on story, but I think that’s ideal in these types of games. “Drop me into the action as soon as possible” is my usual motto for adventure-style games. What started out as a game with a very strong and unique art style, however, unfortunately gave way to a game with numerous gameplay issues. 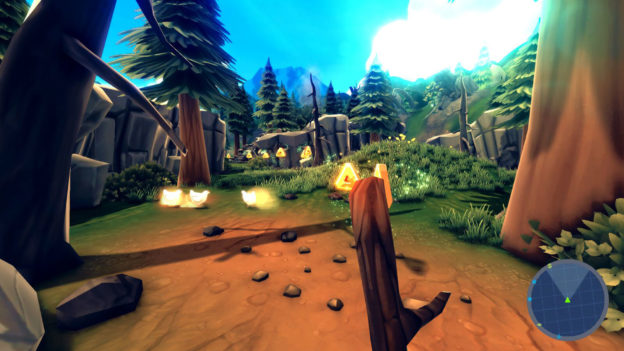 Let’s start with the good aspects in the game: the 2D character designs / animations. These are fantastic! What initially catches your attention with AWAY is the colorful, bright character designs. Some games will feature this type of great 2D character art in promotional materials only, but the developers of AWAY came up with an ingenious way to incorporate those same 2D designs into a 3D world. The characters look great in-game and they retain charm even in a 3D, polygonal world–a very nice accomplishment. However, the charm quickly wears off the more you play. 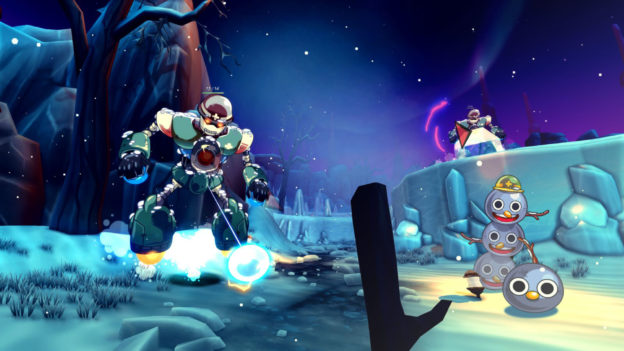 One of the first issues you’ll notice in AWAY are the very long load times. It takes quite a while to actually get into gameplay. Some of this could’ve been alleviated if the load screen was more than a simple black screen with an animated blinking eye in the bottom right corner. Some gameplay tips or even showing some artwork of the game during this loading screen would’ve helped the time go by faster. 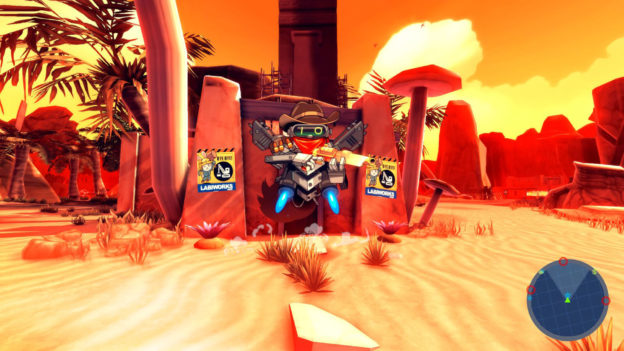 The gameplay in AWAY features plenty of exploring but mostly a lot of first-person combat. Your main character’s weapon is a stick–yep, just a plain ol’ stick. I thought this was kinda cool to have something different than a typical sword, but the frustrating combat prevented any enjoyment of this curious main weapon. There is a small dot to show you where your attacks will be directed, and it changes when enemies get close enough to strike. However, if you don’t attack immediately when you see that change you’ll get hit along with landing a blow on your foe. I eventually got the timing, but it meant I would have to attack before I even saw that icon. There’s nothing more frustrating in a first-person game than not knowing when/if your attacks will actually land on their target. 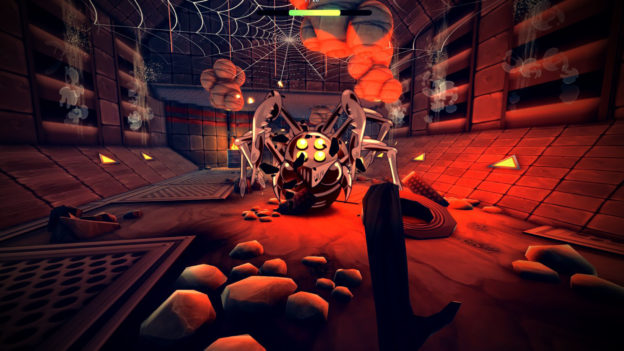 Another key gameplay element is recruiting characters you see in the world. This comes through a series of dialogue prompts with some definite humor interwoven. Once you’ve spoken to a character and have a friend cube in your inventory, that character will join your party. You can switch to him/her at any time and your view of the world (literally — a new filter will augment the colors and how things are rendered) and weapons will change. Instead of a stick, you’ll be rewarded with some weapons with more range, though they’re usually still quite unconventional. These support characters have a gauge, and once they’re used up they’ll be gone from your party. You’ll have to find more friend cubes and go back to their location to get them back. 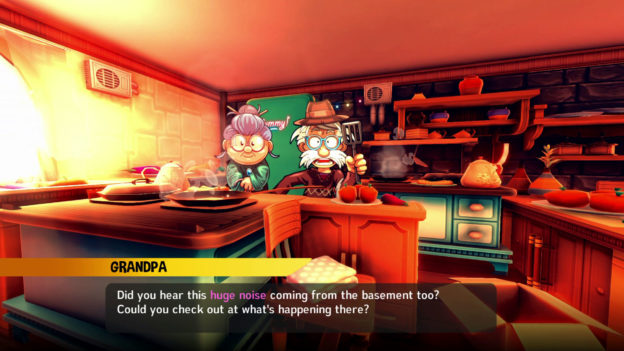 When it comes down to it, the biggest issue I had with the game was a feeling that I wasn’t actually getting anywhere. Each area you came to, the first one being a forest theme, involved finding and exploring three dungeon-like caves and activating switches. Once you activated all three a gate would open leading to a final cave area usually featuring a boss or extra challenge. After completing this, if you came back to revisit this area you’d have the same three switches to activate all over again. Also, each cave-like area layout is randomly generated, but each iteration felt so similar to the last. I know these design decisions are probably intentional, but it really hampered my enjoyment of the game. If I’m not affecting anything in the game or if there isn’t a real level of persistence or change I’m making, where is the incentive to further progress? If you enjoy rogue-like / rogue-lite games, this may not be an issue for you, but it certainly made it frustrating for me. Also, if you die along the way in any area you’ll respawn all the way back in the game’s starting area (your character’s house), meaning you have to traverse back to where you were and endure all of the loading screens along the way.

While AWAY: Journey to the Unexpected features some great 2D character models and animations, the gameplay simply didn’t provide a fun experience. Close-up first-person combat and first-person platforming has never been easy in games and AWAY doesn’t take any meaningful step forward in solving those issues.

While AWAY: Journey to the Unexpected features some great 2D character models and animations, the gameplay simply didn’t provide a fun experience. Close-up first-person combat and first-person platforming has never been easy in games and AWAY doesn’t take any meaningful step forward in solving those issues.