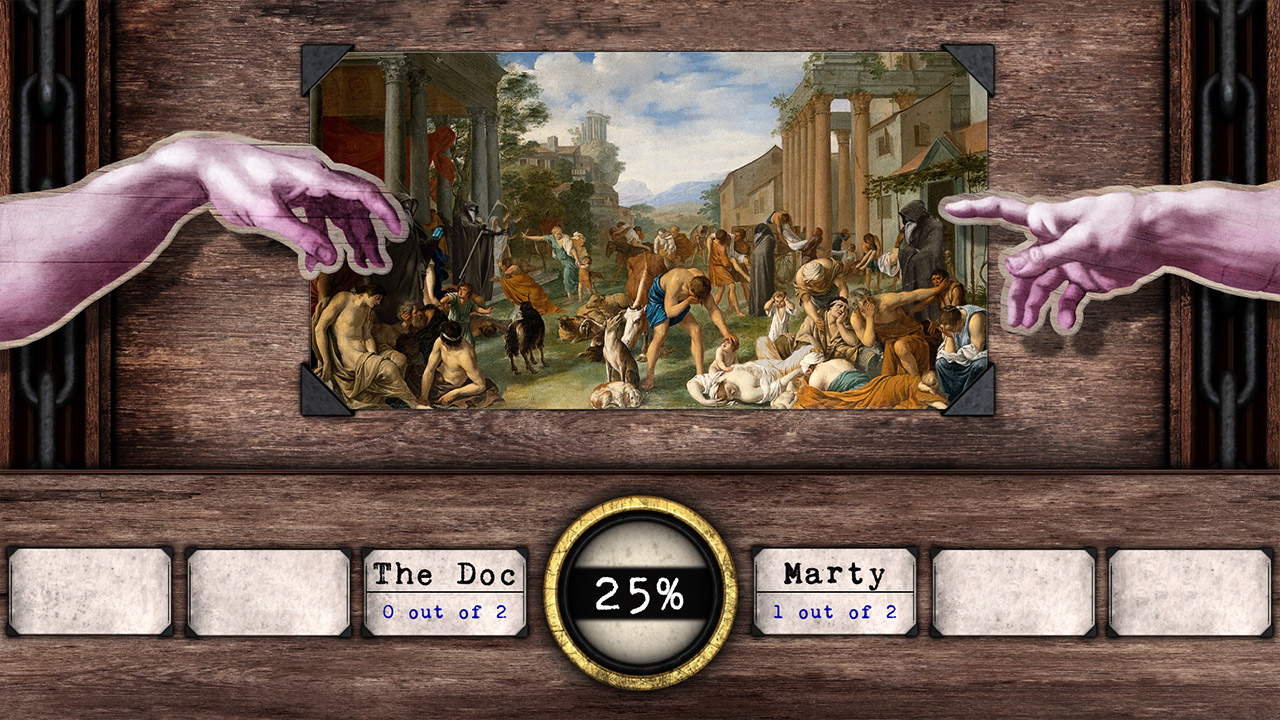 In theory, I enjoy when video gaming systems try to be party games. Party games are fun, after all, and they can get people talking and laughing in ways that action-intensive games such as Mario Party and Smash Bros. simply cannot. But I also enjoy when video games are finished, by which I mean the developers completed the creative process, and that didn’t happen with Awkward. So, let’s talk about this and find out what went wrong.

Awkward’s premise is simple enough. You sit in front of the TV with up to five other players and you answer questions, all of which seek your opinion on subjects ranging from politics to grade-school-gross to moral dilemmas. Other players then have to guess what you selected. 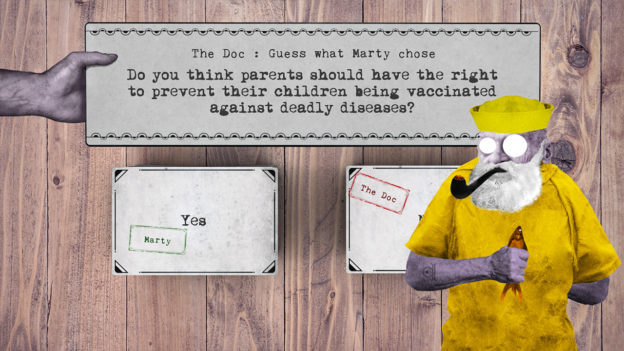 This goes on for three rounds, and then the game is over. Depending upon the mode you’re playing, the player or team with the most matches wins.

That’s an okay basis for a party game, but with nothing (and I mean nothing) else to surround it you’ll find the most awkward thing about this game is that you asked your friends to play it.

Yes, some of the questions can provide some good laughs and/or discussion. Despite its mature rating, I played Awkward with my 14- and 12-year-old kids figuring I’d just skip past the inappropriate questions. Ends up that wasn’t necessary as we never hit anything they couldn’t handle. The majority of the 5,000 plus questions I’ve encountered were pretty mundane, and it makes me wonder why the developers didn’t include an option to select specific categories or age groups. If I want to play with my kids, let me select a round with only the goofy questions. If I want to play with my adult friends, let me select the crude or political content. As it stands, my kids were debating whether they’d rather eat boogers or ear wax on one question, then listening to my in-depth explanation of the importance of America’s welfare system the next. You can see how either would kill the fun based on who’s playing.

And then there are the questions that aren’t fun to answer to no matter who’s playing. Such as: 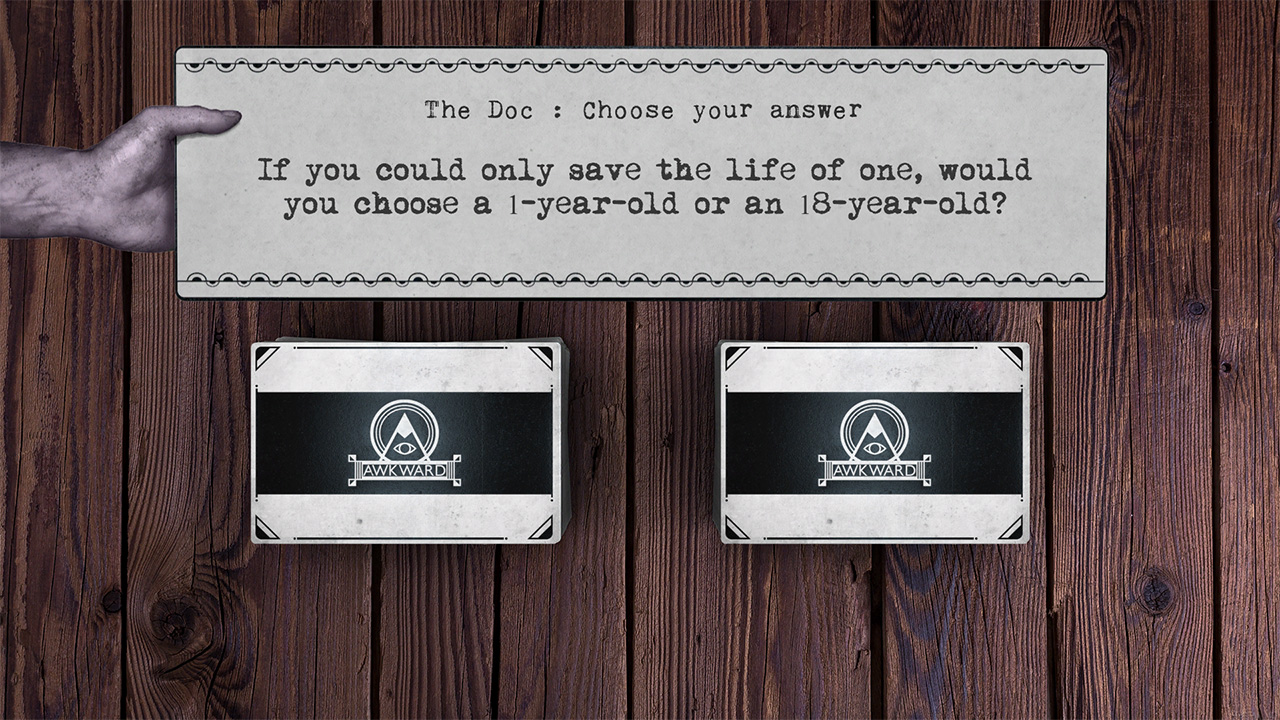 Sure, I have an opinion on this, but is it something fun to discuss with friends? Sans game, can you imagine walking up to someone at a party and asking, “Hey, Hodge, fun question; who am I more likely to let die first, a baby or a teenager? You think about it while I mix us up a couple slow gin fizzes.”

I don’t call that awkward, I call it depressing, and it doesn’t invite the kind of fun debate that games like this should. To its credit, you only come across questions like this sporadically, and they could be forgiven if there was more to the game. But there isn’t. You answer a question, your teammate guesses your answer, you’re scored, and you’re shown how other people around the world answered. Next question, next question, end of the round. Next round, next round, end of the game. 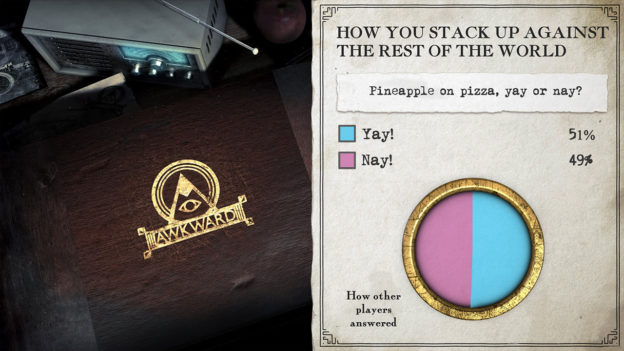 As short as each session is, there should be something more to break it up. More gameplay elements, more animations, more audio, but no. There is no lightning round. No bonus round. No celebration for the winners. Nothing. Just the feeling that you and your friends needed to kill some time before the pizza / strippers / Louie the guy who comes in and says his catchphrase over and over again arrives, depending upon the party.

To be fair, you may get $12 of entertainment out of Awkward if you load it up at your next party. But because the questions aren’t categorized by appropriateness for different age groups, adults will likely get bored and kids will likely get confused…and possibly traumatized. Each game session can be completed in 5 to 10 minutes, and with no variation to keep players engaged, that’s about enough time to push players towards another Switch game or into another room altogether. Which one has the sausage cheese ball appetizer?