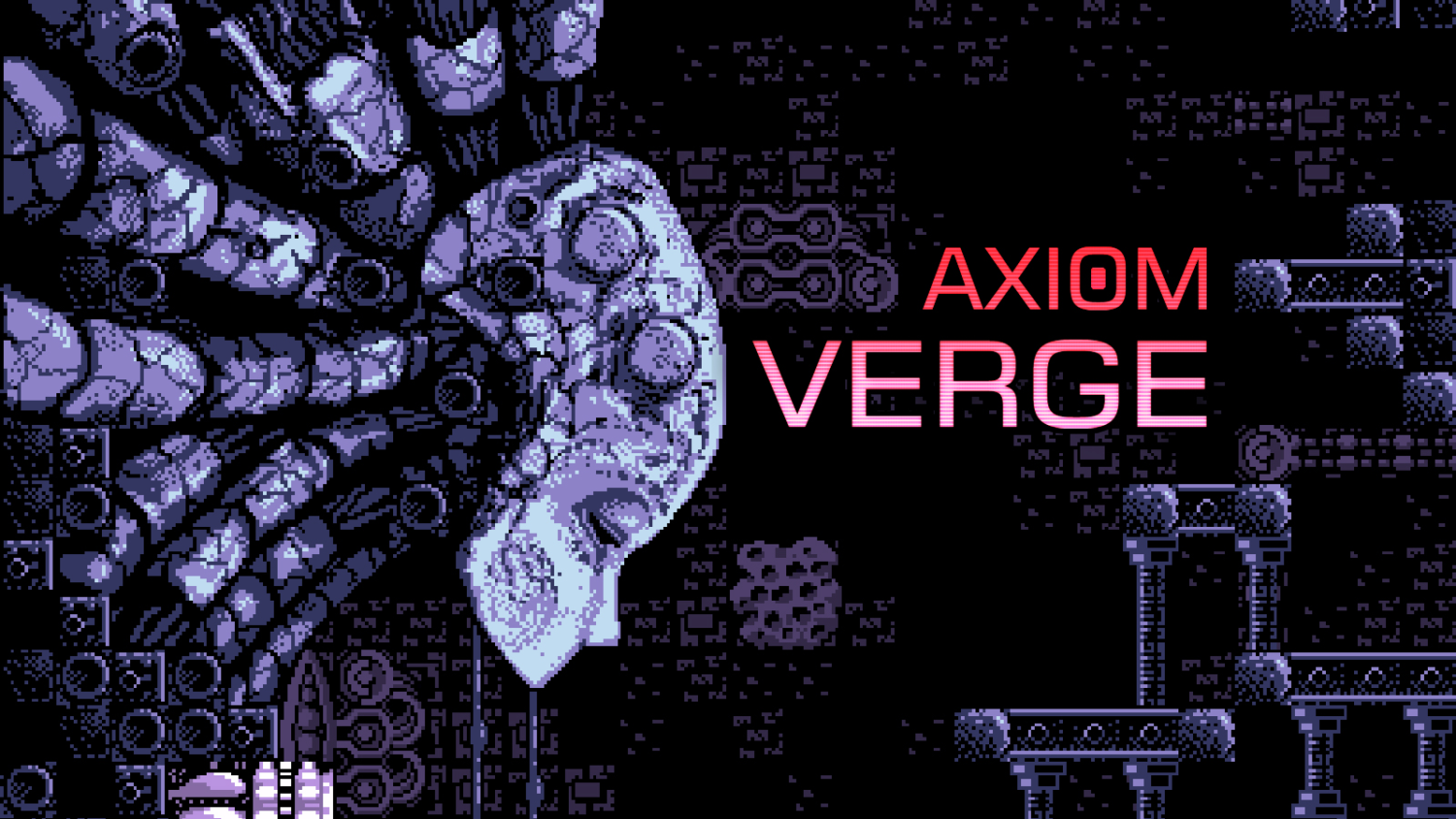 If you’ve already played Axiom Verge on any other platform, you can already guess where I am going with this review.  Yes, Axiom Verge is an amazing title, and one that deserves your attention (especially you Metroid fans out there).  However, don’t go into this experience thinking you’ll find a 1-to-1 Super Metroid clone.  Many of the elements that made Super Metroid a classic are present, but Axiom Verge makes a point to carve out its own identity.  Although not explicit, the world of Axiom Verge has a pseudo-virtual vibe, which is reflected in both the environment and a few of the weapon modifications.

The game’s plot (which I actually won’t detail here for spoilers), makes an appearance through a handful of cutscenes and exposition dumps, which is a double-edged sword.  On the one hand, a more prominent story makes Axiom Verge more distinct than the Metroid games draws inspiration from, but on the other, cutscenes and dialogues breaks halted the game’s pacing.  More about the the world of Sudra can be found through pages and reports hidden throughout the world.  With as much emphasis put into story, the third act fell flat.  The buildup was sudden, and I didn’t even realize I was about to face the final boss until I had reached the final room.  The boss itself is not much to look at, and it is certainly not the climactic bout I was hoping to see.  The game’s final act had ended like it had began; abruptly, and I felt like it was not given the same love and polish that the rest of the game had been given.  I give the story some major flak, but it is my only real gripe with this title. 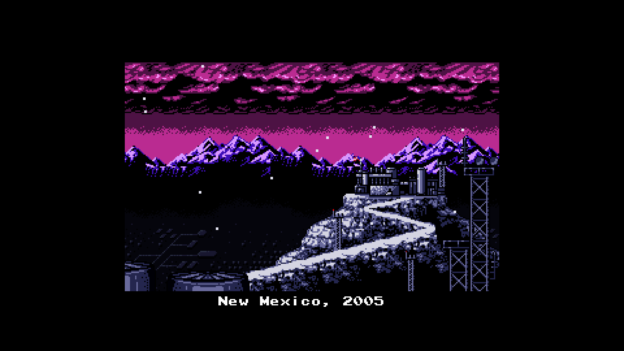 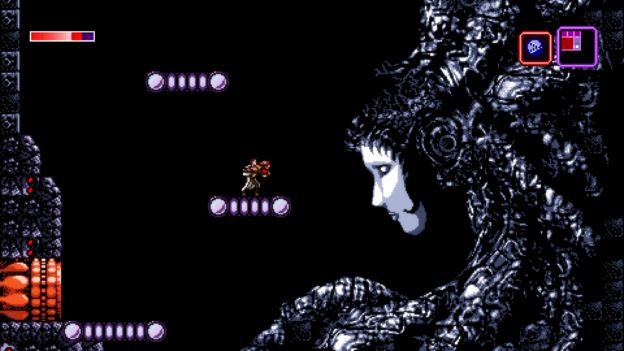 The gameplay is solid, and doesn’t simply copy and paste mechanics from its muses.  In the Metroid series, weapons sometimes act as keys to open doors, create platforms, or open puzzles.  Every beam acquired felt like a huge deal.  For Axiom Verge, the weapons, of which there are many, providing players with a myriad of ways to deal with the daunting foes standing before them.  Many of these weapons fun to look at, but I felt like only a handful felt as powerful or effective as the Axiom Disruptor, your default beam.  As a result, stumbling across new weapons lost its allure after awhile.  I would fire the new beam a few times, then switch back to the two or three beams I knew would get the job done. 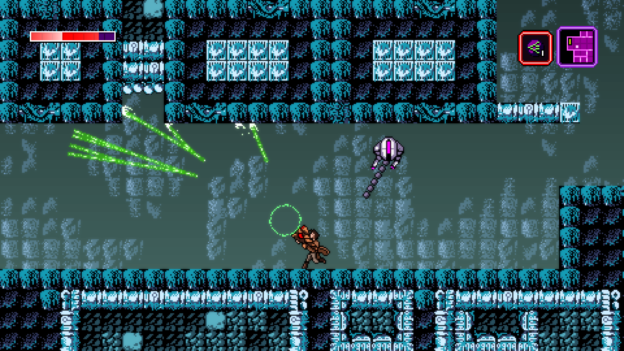 In place of weapons, accessories are what gives Trace the power to move from area to area.  For example, the trench coat allows trace to phase through thin walls in any direction, as well as possibly giving Trace a mall vertical boost if need be.  The drone, which can be fired out of Trace’s gun, is where the game’s puzzle-platforming really shines.  The drone acts a bit like Samus’s morph ball, but it’s invulnerability, combined with the ability to shoot the drone to unreachable locations, and the later ability to act as a warp point for Trace, makes the little robot far more versatile asset.  These upgrades were not very numerous, but were placed far enough apart from each other, that each upgrade felt like a big deal; you’ll have plenty of time to notice sections of the world that catch your eye, leaving you itching to find the next big piece of equipment to explore and find even more hidden areas. 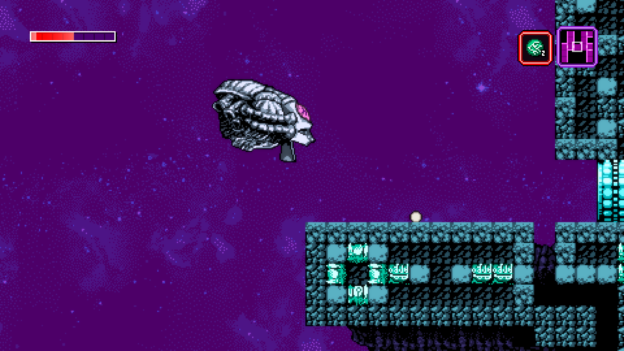 Axiom Verge takes finding hidden areas one step further by taking advantage of the Address Disruptor’s mechanics, which not only changes or warps certain objects in and out of existence, but can reveal codes.  Unlike the games of old, these codes open up new areas or translates texts player come across.  In other games, going through a menu and entering in codes would be breaking the fourth wall, but Axiom Verge’s theme actually integrates the code system nicely.

Metroid fans have been clamoring for a title the likes of Super Metroid, Zero Mission, or Fusion for awhile, but Nintendo doesn’t seem inclined to deliver.  Axiom Verge fits that niche quite nicely.  However, Axiom Verge isn’t simply a Metroid clone, but a solid exploration and action game in its own right.  The game progresses at a steady pace, and the number of power-ups, though some not as beneficial as others, certainly make you feel more powerful as the game moves forward. Story’s third act is the only real weak point in this title, but this is only a small gripe amidst a sea of praise.  Axiom Verge is an indie title that everyone should have on their systems.