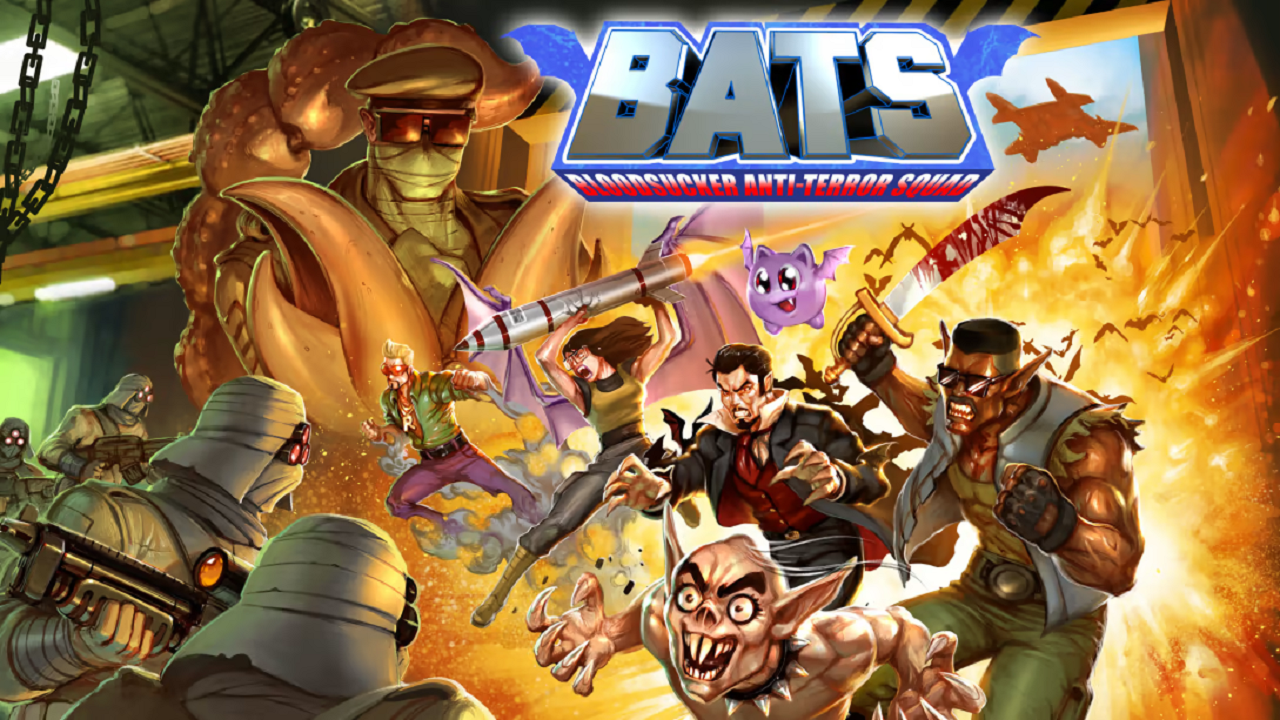 So, imagine a classic retro platform shooter-style game in a GI Joe-like setting BUT you start as the vampire leader of an anti-terror squad that includes Nosferatu, who is named Nosferadude and is the closest thing to Blade without getting into trouble with Marvel and Disney… have you got that image in your head? Yes? Okay, well no need to, because we already have it in the form of BATS: Bloodsucker Anti-Terror Squad. Your imagination is probably picturing something 100 times better than the reality of BATS, but did yours have crude humour? Didn’t think so.

BATS: Bloodsucker Anti-Terror Squad is a retro-style arcade platform shooter developed by Ritual Games. It is heavily inspired by worlds such as GI Joe, where the villain in this game is STING in place of Joe’s COBRA. The story centres around Count Bloodvayne, who’s out to stop STING (not the musician) and rescue his team.

There are five levels to BATS. Each one you complete, you can rescue a single teammate. The choice is completely yours and there is no set order to unlock them. Every teammate plays differently from the last. Of the five team members, you have three fighters who use their fists/claws, one sword user, and one shooter. I am sure everyone will be able to find a team member they get on with the most gameplay-wise. I enjoyed the Count the most, so after trying everyone else and usually failing a lot, I returned to good ol’ Bloodvayne! Also, as the Count, you can rip enemies’ heads off and use them as a projectile… just saying.

The controls are simple and mapped the same for all teammates. Alongside movement buttons, you have a jump, attack, and dodge button and each character has a special skill that can only be used a certain number of times or when certain criteria are hit. For example, Nosferadude drops special bombs by holding down the attack button – this can only be used three times through a single level. Count Bloodvayne’s ability unleashes vampire mode when a certain combo number is hit, where he becomes a giant wolf and can move much faster and kill enemies more quickly. The controls feel fine and are smooth for the most part. Jumping is sometimes hit or miss. This mostly occurs when attempting to reach a new platform or wanting to jump around something. It’s hard to manage the height or distance, which could cause missing a ledge or ‘over jumping’ into a hazard.

BATS is a very fast-paced game and actively promotes this with combo scores and a speedrunner mode. The game is at its most enjoyable at the fastest pace possible; stringing those combos of kills and progressing through the levels is highly rewarding, but comes at a cost. Your health is based on a blood gauge. Some of your skills and actions such as successfully dashing or destroying doors are also based on this blood gauge. You fill this gauge by collecting drops of blood from the enemies you kill, which is fine, except the animation where the drops of blood spawn after killing an enemy takes so long, it disrupts the momentum and spoils that fast pace that you and the game so desperately want. These can be ignored, and you’ll pick up the odd blood droplet that is already out and about but will make for a more difficult campaign – especially with the boss fights and the end of each level against STING. This stop-start blood collecting really harms the experience for me.

When playing BATS in one long session, the game can become a little repetitive. The layouts of the levels are fairly like one another, and enemies are virtually all killed in one hit, which wouldn’t be an issue, but with the stop-start nature mentioned it can become boring. I found that I got the most out of BATS by jumping in now and then or even ‘pass and play’ with a friend between levels or lives, swapping which teammate we used to freshen up the level. As mentioned earlier, each member plays differently, which helps, but we all tend to fall into that pattern of using whom we feel we’re best with.

The music is great fun, and perfect for the high-octane retro style this game has, and again, really promotes that fast-paced action. The sprite work is also great. Every teammate is unique and full of character. The game is full of great humour in its small cutscenes and dialogue sprinkled throughout. There are lots of tongue-in-cheek moments, and references to the media it’s parodying. It doesn’t take itself too seriously and that adds to the charm of this title.

BATS: Bloodsucker Anti-Terror Squad is fun. It has great humour, doesn’t take itself too seriously, and has some great homages to several franchises all whilst cracking a joke or two at their expense. Its gameplay is fine, and I think with a little bit of TLC to tighten the controls and fixing of the blood drops, it would turn BATS from a good game to a great one.

BATS: Bloodsucker Anti-Terror Squad is fun. It has great humour, doesn’t take itself too seriously, and has some great homages to several franchises all whilst cracking a joke or two at their expense. Its gameplay is fine, and I think with a little bit of TLC to tighten the controls and fixing of the blood drops, it would turn BATS from a good game to a great one.