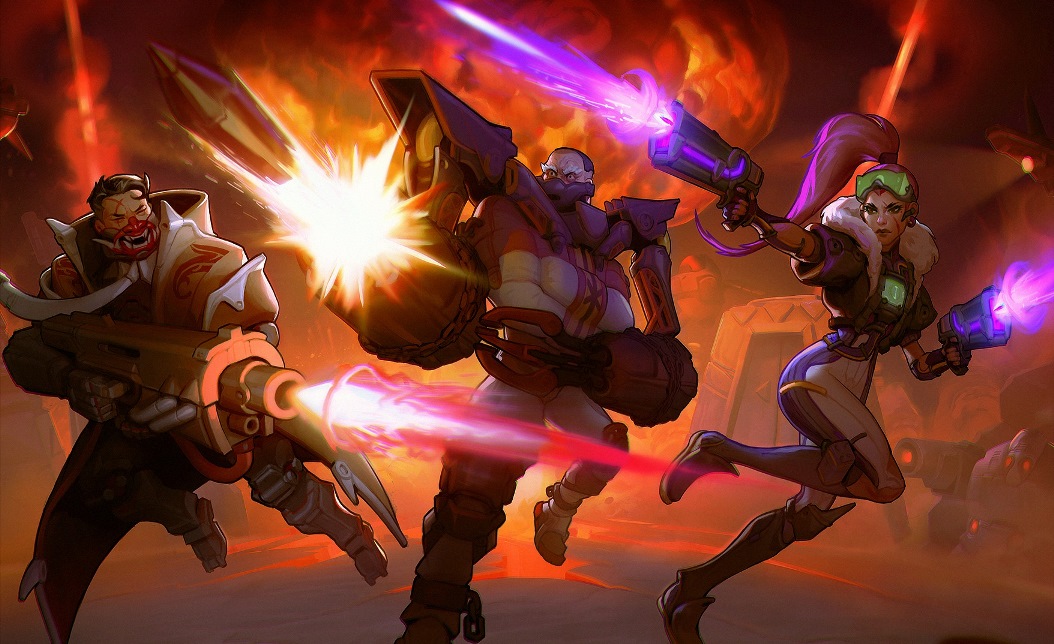 Battle Planet – Judgement Day from EuroVideo Medien doesn’t take long to make its intentions known. Within the first few minutes, this twin-stick, rogue-lite shooter dares you to either love it or hate it, much the classic arcade games from the ‘80s. I respect that, but I’m not entirely sold on games requiring you to play the same levels over and over in order to advance.

The action starts when “the universe’s 3 most wanted criminals” crash land on what the game calls a planet, but for the sake of accuracy, we’ll call it a planetoid…or perhaps just a really smooth, spherical asteroid. It’s very small, you see, and it’ll spin beneath you as you run across its surface. 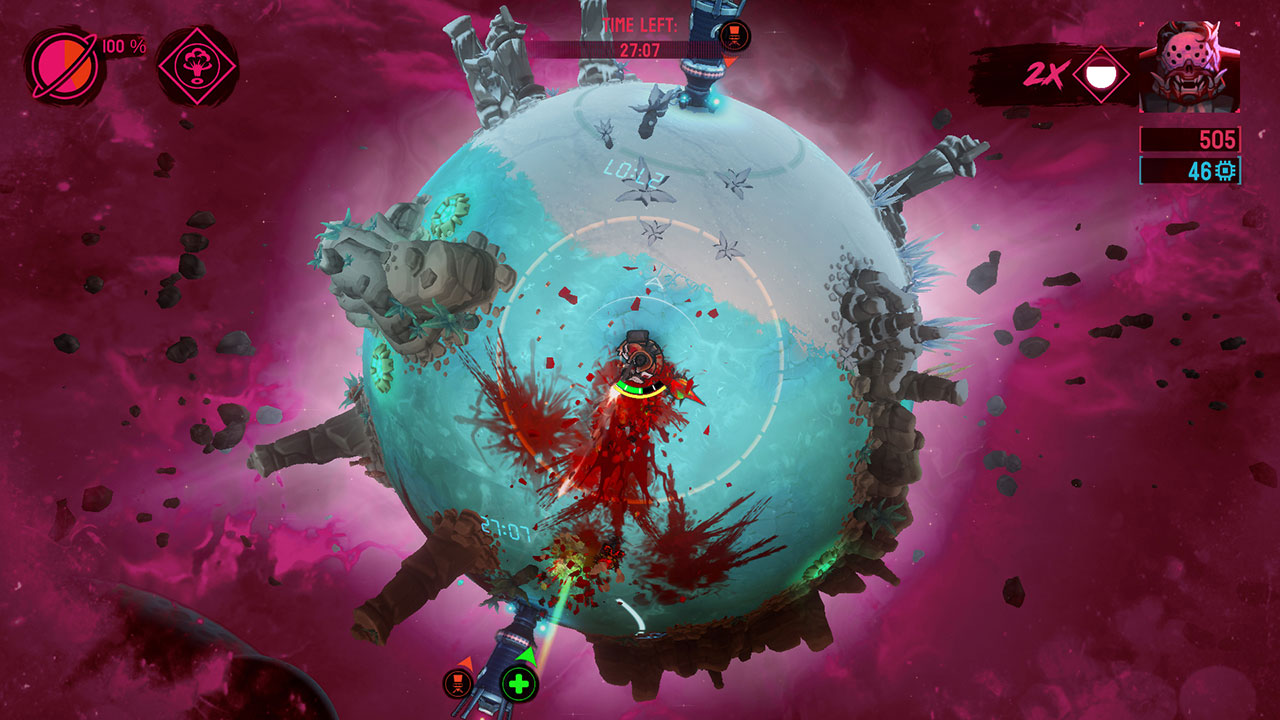 You move with the left stick on your Joy-Con or Pro Controller and aim with your right, a control scheme we’ve seen numerous times before. You’ll need to quickly master the controls in order to survive the numerous enemies trying to kill you—everything from resident aliens to the police units who aren’t happy you escaped in the first place.

That’s pretty much the whole game in a nutshell, but there’s plenty of variation to keep things interesting. The power and number of your enemies ramp up, of course, and you’ll hop from planetoid to planetoid to get yourself a change of scenery. 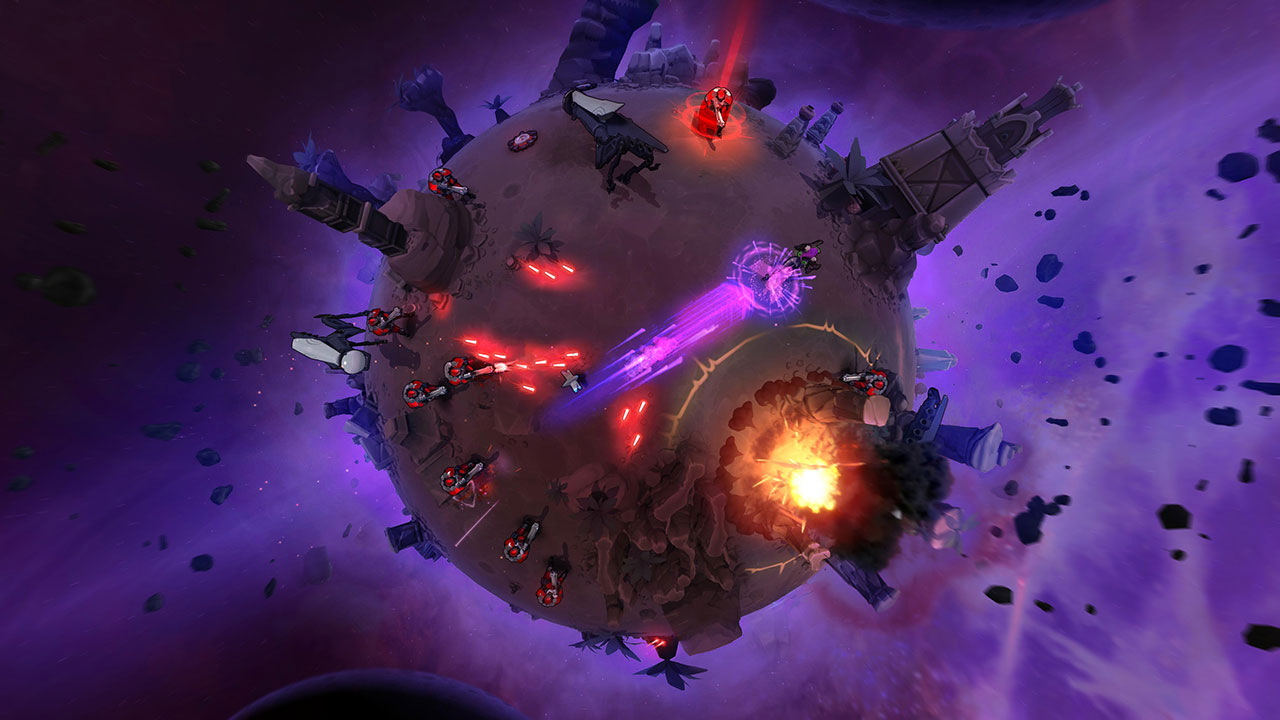 You’ll also unlock a couple additional characters with which to fight, accumulating power-ups along the way. In fact, that’s your rogue-lite element right there. You’ll be underpowered after the first few levels, making it nearly impossible to proceed. However, you keep any upgrades you acquired in your losing efforts, making it easier to beat the level the second, third, or fourth time around.

Is that entertaining? It can be, yeah, because there are some crazy bosses to fight along the way. They’re fun to take on, and you get the feeling when you lose that you could’ve pulled through with slightly better weapons and defenses, so you upgrade them and head back in. 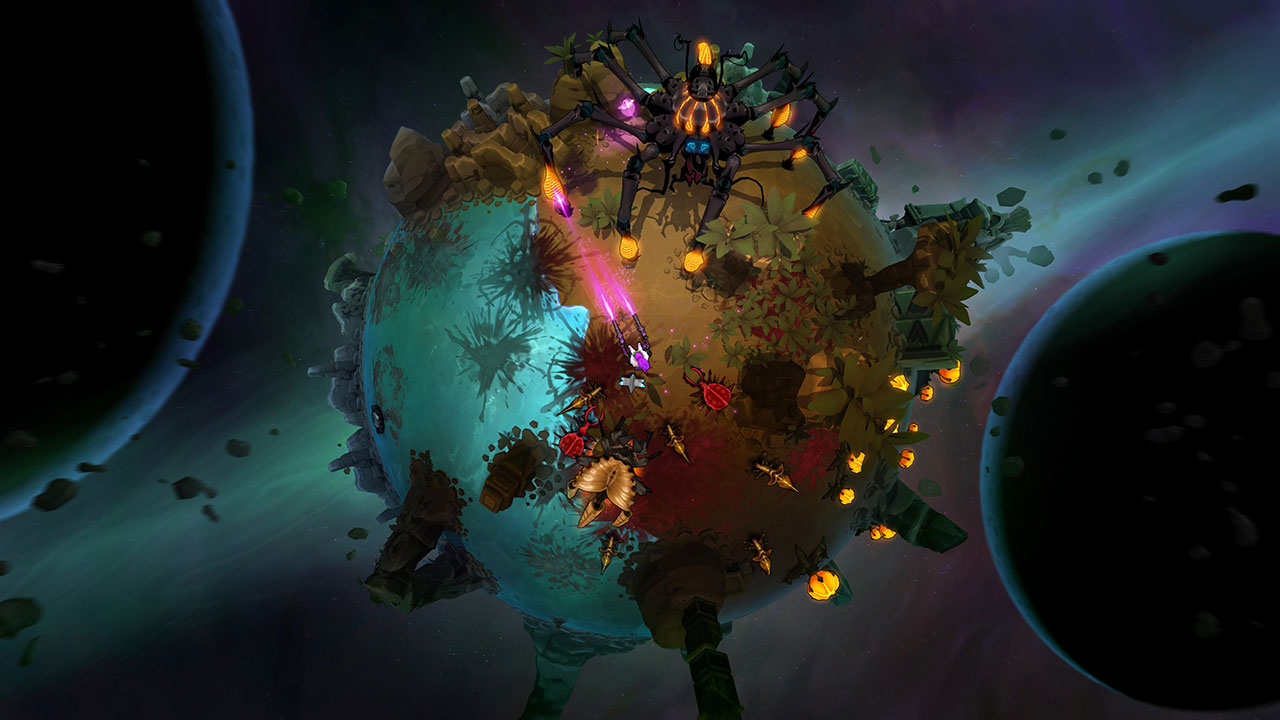 It also helps that the planetoids themselves are well-designed with plenty of hazards and helpful items to utilize. If you’re being chased down by a tough enemy, for example, you can find a jump point near a wall to catapult yourself to the relative safety of the other side. Fleeing is very much part of the battle in Battle Planet.

It’s even more fun if you play it with a friend in couch co-op mode. Shifting to a split-screen presentation, Battle Planet provides each of you with a top-down view of your chosen convict and plenty of opportunities to call out to each other for help. You’re required to stand within close proximity of bombs to diffuse them, for example, so getting the other player help protect you while you stand idle really makes a difference. 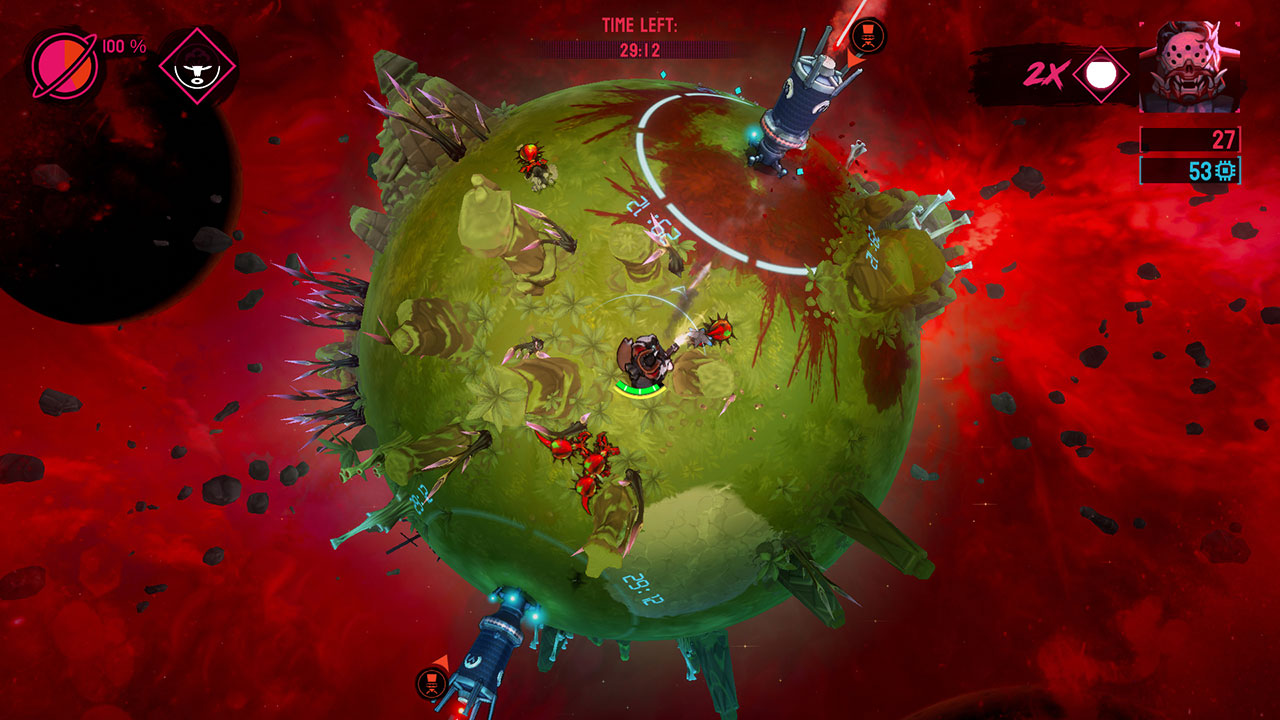 Of course, you’ll want to be playing in docked mode for this, so you’ll be using handheld mode for single-player combat only.

Battle Planet’s vivid graphics and smooth animations help to prevent the busy action from overwhelming you; I lost sight of where I was and what I was doing only during the game’s most intense moments. The audio is fine, too, although I could’ve done without the random snippets of dialogue. I get that these are the universe’s three most wanted criminals, but they’re way too cocky considering their current predicament. Also, their one-liners are neither clever nor funny. These three criminals may have been wanted for being uninteresting.

The core arcade shoot-em-up action is what carries Battle Planet – Judgement Day through. It’s a little too repetitive by design to push you straight through, but it’s a fun, fairly priced diversion to boot up every now and again, especially with a buddy by your side.