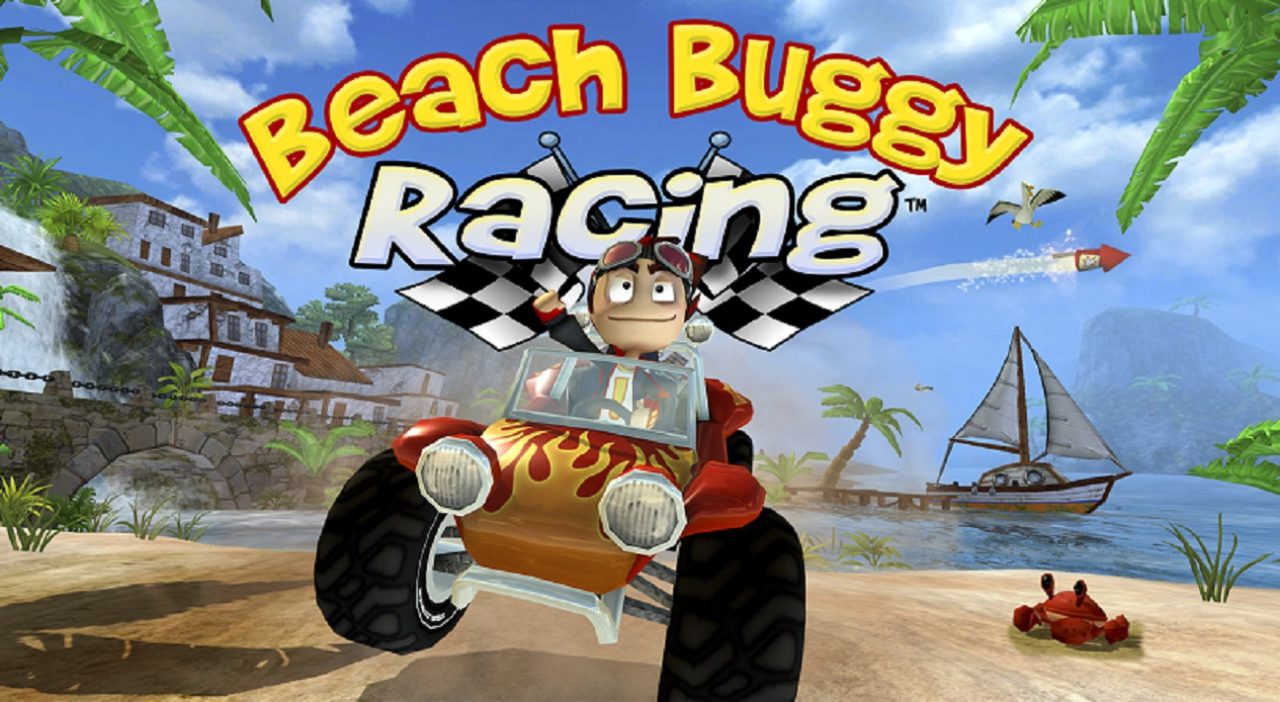 It would be the simple route to compare this game with Mario Kart 8 DX. But such an approach strikes me as rather lazy. Also, we’re talking a $59.99 retail Nintendo release vs. a $9.99 digital indie title. Taken on its own, Beach Buggy Racing proves to be an okay game in small bursts.

A mandatory, but small, tutorial gives you a feel for the basics upon initially booting up the game. The control is a bit floaty, but not bad. There are a few modes to pick from, but at the start you’ll probably be focused on career, where you can earn up to three stars per race, and unlock more content.

You will need to replay earlier races to earn cash for upgrades. This reflects the game’s pay or grind mobile origins. My advice is don’t think about upgrading until you start placing outside of the top three. Your upgrades won’t carry over to newly purchased cars. With rubber band AI, smart upgrades are key.

One element that adds difficulty is the inconsistent way the game handles your vehicle going out of bounds. It bills itself as “off-road” but I have to chuckle as there’s little allowance for exploring outside the usually narrow tracks. It’s almost like the developers didn’t trust players to get back on route. There’s no map as well. This isn’t usually a problem, but it can be. For instance, I was racing on a straightaway with turns to the left and right. I chose right, and lost the race. The arrows indicating left to be correct weren’t visible until after the turn was made. Lastly, the camera is a smidge too low (with no option to change), which proves mildly annoying at times, such as when engaging in a follow- the- leader race.

Speaking of, occasionally there are different modes to participate in other than straight racing. Besides the above mentioned, sometimes you’ll be focused on collecting powerups or shooting targets. These examples and more inject some variety, and though they are hit and miss in terms of enjoyment, I definitely appreciate the effort.

With fifteen tracks to select from, the assortment is rather good. But they are repeated much too often throughout career mode. Repetition, when playing solo, can be a big deterrent here. At least the numerous powerups bring some variety – there are over two dozen to make use of. Each racer also has their own unique, one time per race, ability to provide an edge.

The angular visuals don’t really wow by Switch standards, but they’re fine overall. There’s some imagination on display, and they get the job done in a no-frills approach. Dated but colorful, and with the ability to customize your car also. Playing in portable mode masks some of the muddier textures. Everything runs smoothly, save for when the odd ‘software closing due to error’ message appears. Well, ‘bug’ is part of the title I suppose.

Career mode aside, there’s also championships, to earn trophies with each car. There’s no online racing, but local multiplayer supports up to four – I was only able to play as two, but it was fun. A daily challenge allows for earning a sizable chunk of cash, and has kept me checking in – it’s ideal for short bursts of play, as is your standard quick race.

I had some real early enjoyment with Buggy Racing, but it started to dissipate the longer I played. Discovering areas that were lacking, in need of more polish, inconsistencies, and bugs, gives this Switch port rough edges. That said, the daily challenge will probably keep me checking in with some consistency. Achievements also provide some extra incentive, and watching my completion percentage rise appeals to my completionist sensibilities. Beach Buggy Racing offers an additional option in the kart racing genre on Switch, and more choices are a good thing.

Beach Buggy Racing proves to be an okay game in small bursts.