Bear and Breakfast is a game that I’ve been keeping my eye on for quite some time. Its visual style and gameplay instantly connected with me when I saw the first trailer. Its mix of Animal Crossing meets Stardew Valley was a huge appeal as I’m a huge fan of both. As it grew closer and closer to launch, I was more and more excited but worried that the game couldn’t live up to such high standards. I was overjoyed when I finally got to play Bear and Breakfast and found that it not only met those expectations but exceeded them. It’s not just an amazing game, it’s absolutely one of the best management sims to come out in years. In short, this is a game you need to download right now. In Bear and Breakfast, you play as Hank the bear. Through a run-in with a robotic shark (yep, don’t question it), Hank and his friends create the first bed and breakfast in the woods. Your job is to continue to manage this establishment, upgrade everything about it, and unlock even more bed-and-breakfast locations. I was fortunate enough to jump in on the PC version when it first launched back in July and have logged over 60 hours in it. The Switch release has been one of my most anticipated Switch releases for quite some time, so here I am, jumping back into the bear-tiful world of Bear and Breakfast. Don’t worry, I’ll do my best to avoid more bear puns (although I can assure you the game will not make that same promise to you).

The first major stand out of Bear and Breakfast is its style. Visually,  everything about the game is adorable. From the way characters are animated and move around, to the overall feel of the game, Bear and Breakfast comes across as a Saturday morning cartoon that you get to be a part of. Then there’s the humor, which is top notch. It never takes itself too seriously and is full of delightful puns, and of course, bear jokes. Finally, there’s the gameplay. Bear and Breakfast is chill. There’s no timer, nothing to make you even remotely stressed out. It’s a relaxing experience about crafting furniture and rooms for your bed and breakfast and doing so at your leisure.

The gameplay is another stand-out feature for me. The game doesn’t directly tell you what you have to do to make your bed and breakfast better. It also doesn’t punish you for your decisions. Maybe today you don’t want to manage each individual room and would instead just like to spend the day gathering resources in the woods. Bear and Breakfast is totally OK with this and provides you with a completely calm experience. Yet its strength comes in its management gameplay. 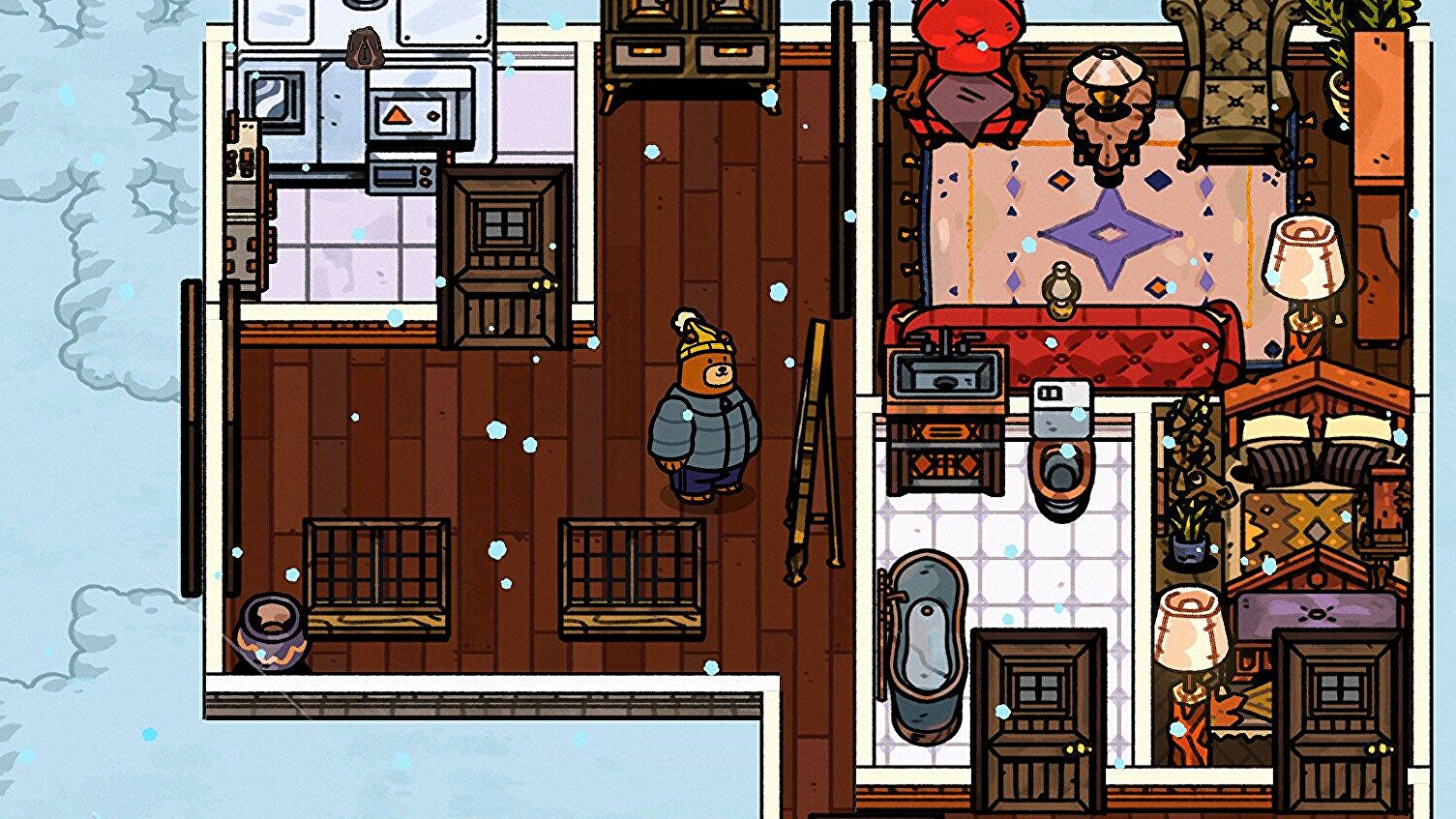 At first, systems seem very basic. You can build a room and put furniture in it and choose a guest every night or two to stay there. As time goes on, you unlock more and more locations, which means more guests are coming. The more guests you have, the more they require of your location in order for you to get a great review and rewards. This then unlocks more things for you to do at each location. So maybe your first bed and breakfast was simply having people sleep in a comfy bed, but later on, you have to start cooking the meals, heating the entire building, providing them exquisite hygiene options, building a bar, building arcades, managing a museum, etc. There’s quite a bit that gets added as you progress, which genuinely makes you feel more in control of every location.

Additionally, there are opportunities to “fix“ the woods that you live in. I won’t spoil any part of the story, but let’s just say that some traumatic event happened and it’s up to you to restore the forest to its previous glory. Your tasks can be simple things, such as cleaning up debris, to more complex things like restoring a diner or rebuilding bridges. It’s the fact that Bear and Breakfast doesn’t force you into one style of gameplay that I truly appreciate. I’ve spent a few hours going around the forest, fixing up things that have nothing to do with my bed and breakfast and the game rewards me for doing so.

The reward system is another aspect that I appreciate. Every time you have someone stay at your bed and breakfast, you are rewarded with two things: a review and money. The reviews help you attract more guests, and the higher the reviews, the better the clients that want to stay. Money is exactly as it sounds; you get money from guests that you can use to buy new blueprints of furniture or food, or random items from in the stores. Bear and Breakfast truly incentivizes you to go above and beyond what a guest might request because the rewards greatly increase, too. Let’s say I have a guest that wants a room with a certain level of comfort and decor. By having a room with more comfort and decor than they were planning, the guest will pay even more money to stay there. It helps you push forward in keeping your bed and breakfast locations as upgraded as possible, while also making you think about which guest you want to stay in your bed and breakfast. There’s also just a lot of content on offer. Besides unlocking numerous bed-and-breakfast locations, there are multiple forest locations for you to explore. This ranges from a lighthouse/beach location, to snowy winter mountains, to dark and mysterious woods. There’s a lot to explore and each location has distinct attributes that you can’t find in others. The mysterious woods have certain flowers that you need to gather in order to unlock specific quests. The snowy mountains can be a location where you build a greenhouse, which is the  only way to grow certain fruits that are vital to your bed and breakfast’s success.

Plus there’s the whole cooking aspect of the game. At a certain point, you learn how to make meals and can master more meals by unlocking or buying recipes. This is important because your guests will soon require more prestigious food from you, so that plate of sliced apples just won’t cut it. It really is impressive what you get to unlock for meals, as they are complicated foods that even I have no idea how to make in real life. It’s extremely impressive that Hank the bear manages to learn it so quickly. It’s just another aspect of Bear and Breakfast that excels and adds another layer of management and fun to your experience. So don’t worry, your job won’t simply be to place beds and wardrobes in a room and call it quits. Making soufflés for your guests on a nightly basis, now that is going to require your attention.

So what about the Nintendo Switch version? Well, I’m happy to say that the Switch version is great, with one minor issue. First, the game looks and runs great on Nintendo Switch. As I had previously played this game on PC, I was super excited to try it out in handheld mode on Switch and found this to be my favorite way to play. I didn’t run into any performance issues, except for when the game autosaved after each night it would freeze for a half second (this was also in the PC version). Not a major issue by any means but it’s there. The only minor issue worth highlighting is the control scheme on Switch. Controlling the characters and gathering resources is super easy; managing your inventory or building stuff gets a bit more complicated. This is pretty common for PC games coming to Switch, as there are fewer buttons on the Switch controller and thus more of a need to map things to the same button. It’is not a game-breaking issue, but is something that requires a bit of time to wrap your head around. I finally got comfortable with the control scheme after about two to three hours. So just be aware that if you pick up the Switch release, there’s a bit of a learning curve on how to control the game. 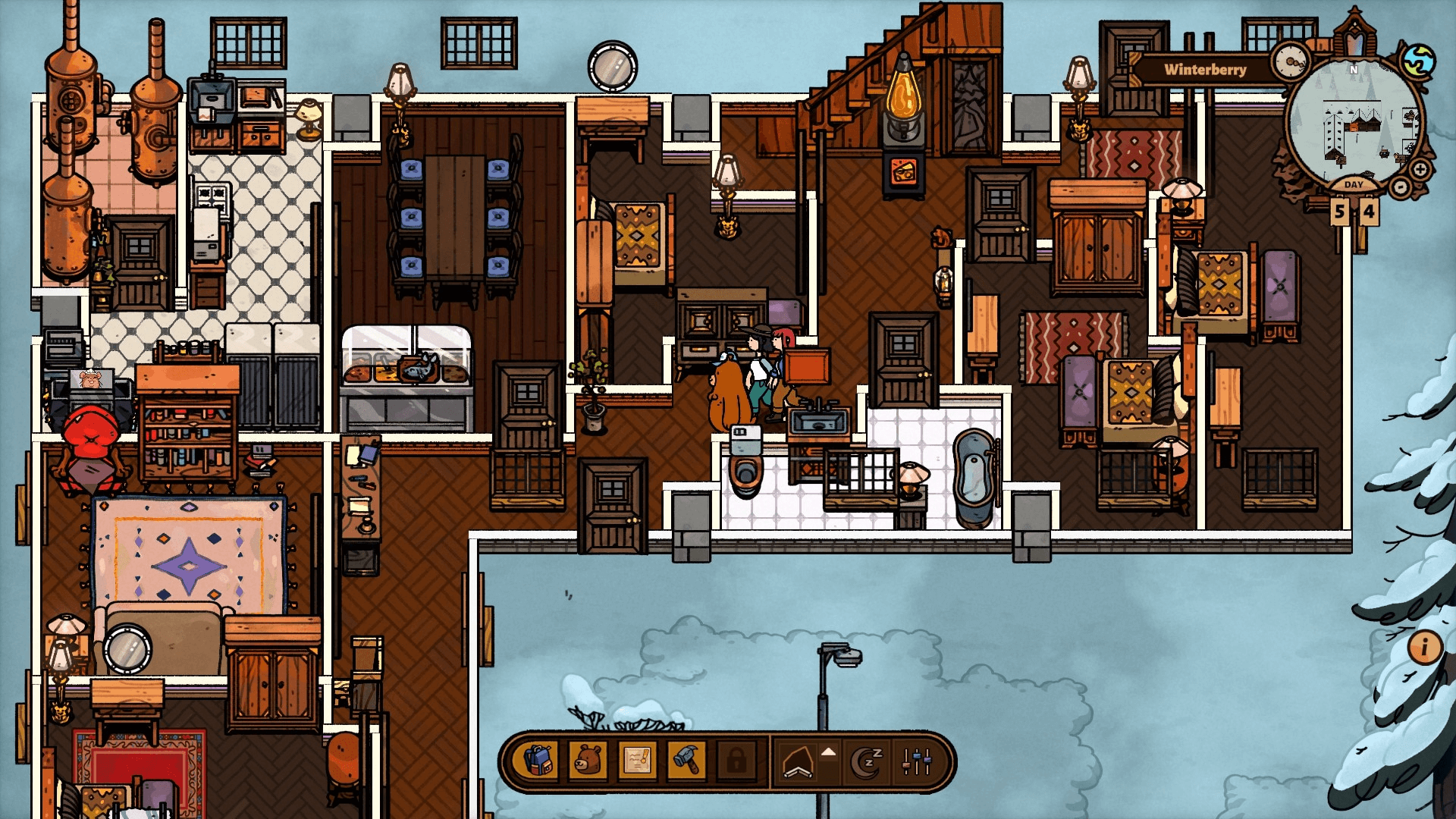 Despite that issue, Bear and Breakfast stands out as one of my favorite games of the year. Its visual style is instantly appealing and its gameplay feels nearly flawless. It’s a chill game that wants you to feel relaxed while micromanaging your own bed and breakfast locations. The game has a wonderful reward system and there’s a ton of things to unlock to keep you playing for hours on end. The game on Nintendo Switch is extremely well done, despite a control scheme that requires a bit of practice to get used to. Bear and Breakfast feels right at home on the platform sitting next to the likes of Animal Crossing and Stardew Valley. Bear and Breakfast managed to be so wonderful that it jumped to the top of my game-of-the-year contender list. Do yourself a favor, go and buy this game. It’s an absolutely wonderful title that must be played for a bear-y good time (I’m sorry, I couldn’t resist). As Hank would say, “Approving Bear Noises.”

Bear and Breakfast stands out as one of my favorite games of the year. Its visual style is instantly appealing and its gameplay feels nearly flawless. It’s a chill game that wants you to feel relaxed while micromanaging your own bed and breakfast locations. The game has a wonderful reward system and there’s a ton of things to unlock to keep you playing for hours on end. The game on Nintendo Switch is extremely well done, despite a control scheme that requires a bit of practice to get used to. Bear and Breakfast feels right at home on the platform sitting next to the likes of Animal Crossing and Stardew Valley. Bear and Breakfast managed to be so wonderful that it jumped to the top of my game-of-the-year contender list. Do yourself a favor, go and buy this game. It’s an absolutely wonderful title that must be played for a bear-y good time (I’m sorry, I couldn’t resist).