An adventure worth taking, but with different transportation.

If you stop to think about it, adventure games usually have a ridiculous amount of combat. The amount of things you have to kill to level up, acquire rare items, or just advance the plot would exhaust most of us in real life. By removing combat, Beautiful Desolation is, therefore, perhaps one the most realistic RPGs I’ve ever played.

Well, save for all the aliens, time travel, and constant running.

Beautiful Desolation begins with an alien craft landing in South Africa. Humans used this craft—soon dubbed the Penrose—to advance multiple forms of technology by a frightening amount in a short period of time. Just ten years later, brothers Mark and Dan sneak aboard the Penrose and are quickly flung into the distant future where Africa has become a wasteland with pockets of control by robots, aliens, and human tribes. What happened here? Can you get back home? Can you even survive? It’s a fun setup that harks back to a time when science fiction was more about the setup and moral lesson than about the laser battles. It’s important to make that distinction, because there are very few fights of any kind in this game. Although it’s billed as an RPG, Beautiful Desolation is mainly a puzzle-solving adventure. The story pushes you through numerous locations and introduces you to over 40 characters with whom you’ll interact. They’ll give you tasks to accomplish, of course, and you’ll have some freedom in how to complete them—or if you want to at all.

Dialogues with these characters are at your control. You’re given multiple responses to select, allowing you to be friendly, curt, intimidating, and so on. There’s no real right or wrong way to behave in this game, but your answers do have an impact and will shape the way the story plays out. The friendlier you are with a particular person or group of people, the more willing they’ll be to help you. But being friendly with one group can put you at odds with another, so there are some tough decisions to make. 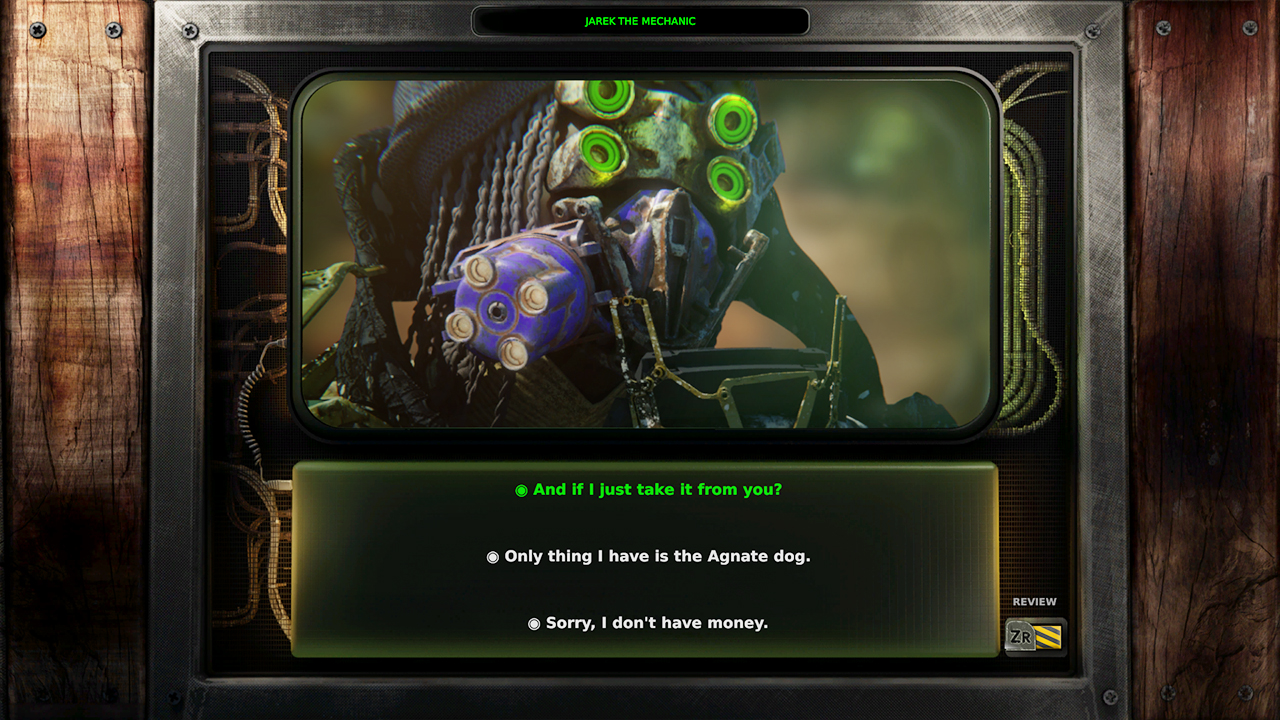 Because conversation and story are so vital to the game’s overall vibe, it’s a good thing these elements are handled with care. The voice acting is very well done throughout Beautiful Desolation, and the writing never feels like it’s trying too hard to be clever or have an attitude—although it is sometimes too pretentious. There’s also a consistency to the characters that’s somewhat refreshing in games of this type. You can go with your gut and generally be right in whom you can and can’t trust, although that doesn’t guarantee you’ll get what you want or need.

Still, what really separates Beautiful Desolation from other adventure/puzzle games you’ve played is the presentation. Rather than give us the typical side-scrolling point-and-click visuals, this world is presented with a highly detailed isometric, top-down point of view. The perspective can be used to great effect, and is accented gracefully by Mick Gordon’s subtle score. However, you’ll spend so much time running/flying back and forth on fetch quests that the presentation does lose its splendor.

Opening new areas helps to keep things fresh, but that presents its own problem as each area is actually made up of undefined linear paths. You’ll think you can get to a certain point on the screen, only to hit an invisible wall and have the game turn you around. This hiccup occurs frequently—sometimes when you’re simply trying to step forward and access a console—and it gets frustrating as you try to move around with the Joy-Con analog stick. I imagine if you were playing it on a PC and could just click where you want to go, all of the required exploration would be much more enjoyable. On the Switch, expect to bounce off a whole lot of nothing until you learn what’s accessible and how to access it.

Another problem is that the graphics are muddy on the Switch, so certain details are hard to make out. Finding items is therefore more of a hassle than it should be, as is determining your path. This is exacerbated by the game’s lack of guidance on where to find what you need. Expect to spend a lot of time wandering aimlessly unless you’re consulting a walkthrough.

The user interface for your inventory, maps and such is also clearly designed for a point-and-click interface. That doesn’t mean they’re unusable on the Switch, just a bit difficult to discern. Beautiful Desolation requires a lot of object manipulation and combination, so I wish the inventory system could’ve been optimized a bit more for consoles (especially for the Switch’s handheld mode). 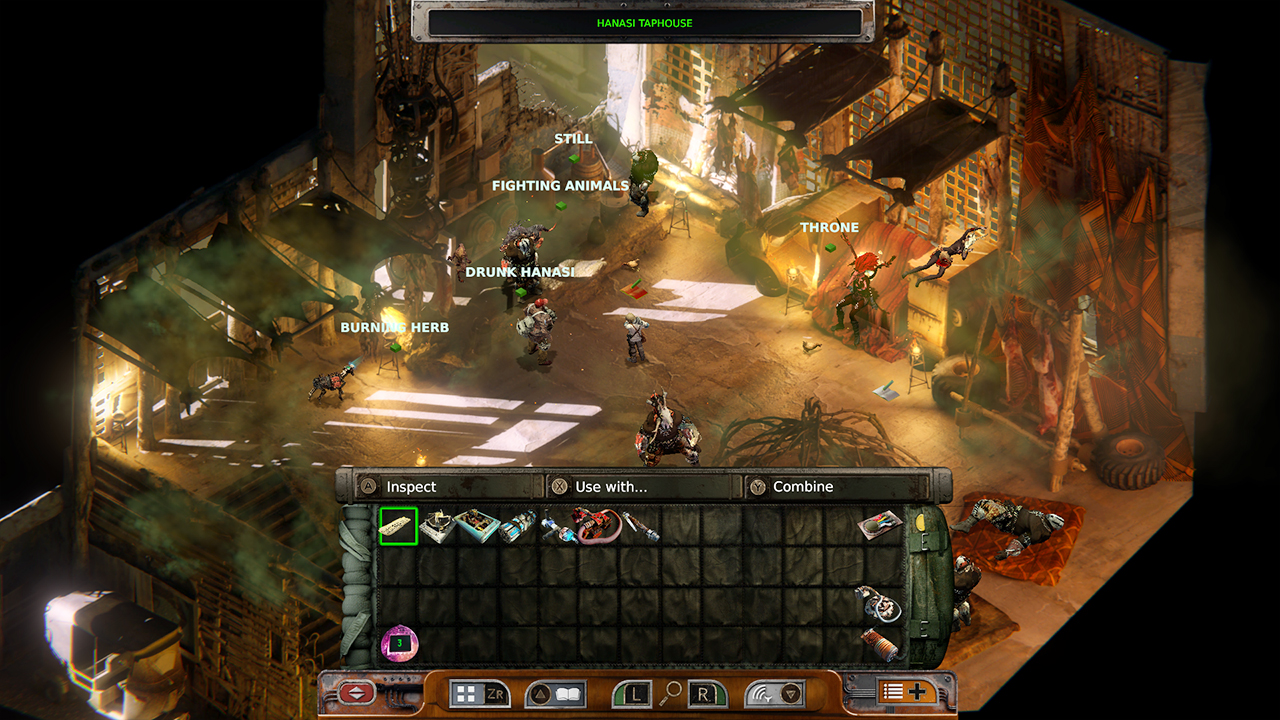 Finally, although the numerous cut-scenes and conversations help pull you into the story, they’re mostly presented on a small screen within a screen. This isn’t really a bad thing, as it adds to the overall sci-fi vibe. But again, if you’re playing in the Switch’s handheld mode, you’re losing a lot of precious retail space. 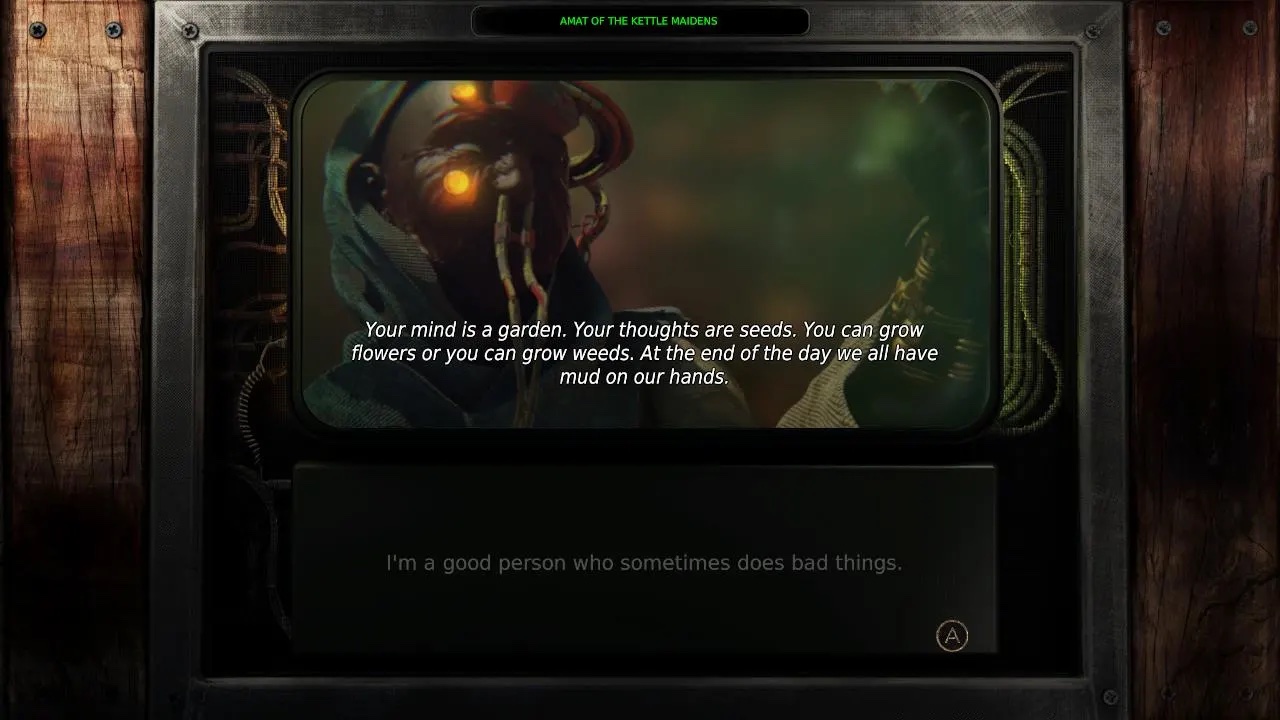 Taking these development and console port issues into consideration, I still want to recommend Beautiful Desolation. The story will engage fans of classic sci-fi, and the lack of combat allows that story and your decisions to be the focus. I also love the visuals, both as a throwback to the RPGs I played in the late ’90s and (hopefully) as a precursor of where adventure games can go in the future.

However, I don’t recommend it on the Switch. Play it instead on the PC, where it’s available for Windows, Mac, and Linux machines.

Beautiful Desolation is a deep, intelligent, puzzle adventure presented with a unique isometric view. It’s an easy recommendation to sci-fi fans who prefer narrative over action, but the Switch is not the best way to explore this apocalyptic world.