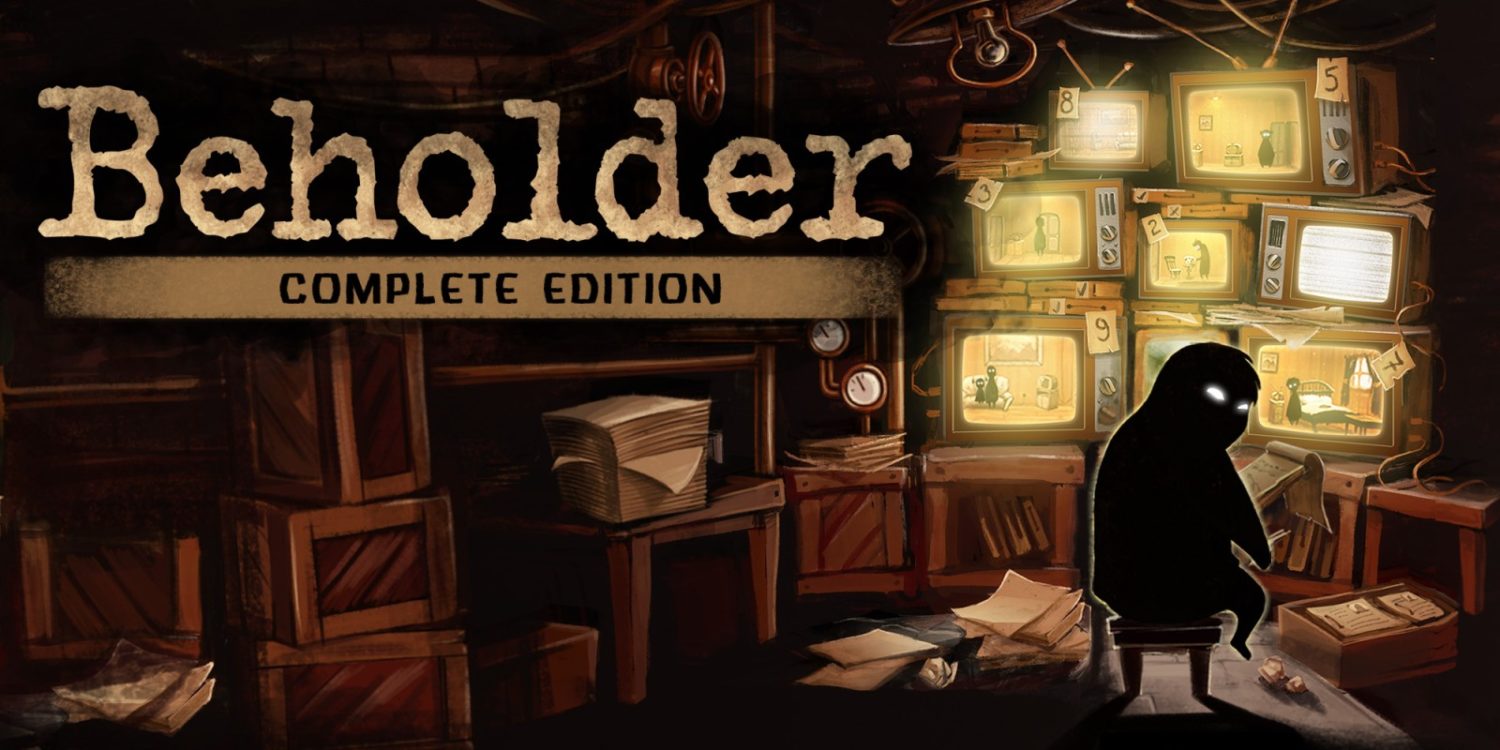 Beholder: Complete Edition is a dark simulation game about spying on your neighbors. It’s got a satirically political edge that borders on being gloomy, yet it’s more or less fun to play. Only some frustrations with the setup and controls stop this from being a great game.

In Beholder you play the role of Carl Stein. As the government-appointed landlord of an apartment block, you and your family move in to monitor the tenants and report on their misdoings. The world is a dystopian future where the government – known as the Ministry – issues inane directives, denouncing things like eating apples or reading philosophy books as illegal. It’s your job to keep tenants in line with these laws. 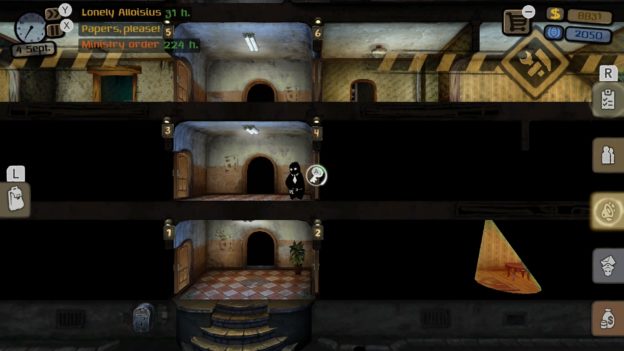 The game involves running the apartment block, including repairing and renting out vacant rooms. To keep yourself employed, you must obey any orders that come from the Ministry, like talking to tenants, rummaging through their belongings, and installing security cameras for surveillance. Once someone crosses the line and disobeys a directive, you collect evidence and send off a report – and then watch the police drag them away. It’s sinister and dark, but also addictive.

Beholder’s graphics are simple, unique and entirely effective. The apartment block is drab, with browns and grays to emphasize the gloomy world we’re viewing. The standout feature is the interesting aesthetic of the characters that uses stark black and white colors – only their eyes are visible on their faces, the rest is in shadow. It’s poetic, since their lives are overshadowed by a totalitarian government. Like a good Pixar movie that makes objects come alive, these shadowy characters still convey emotions and personality through movement and shape. We’re also privy to their intentions via thought bubbles that show an icon of what they’re about to do. 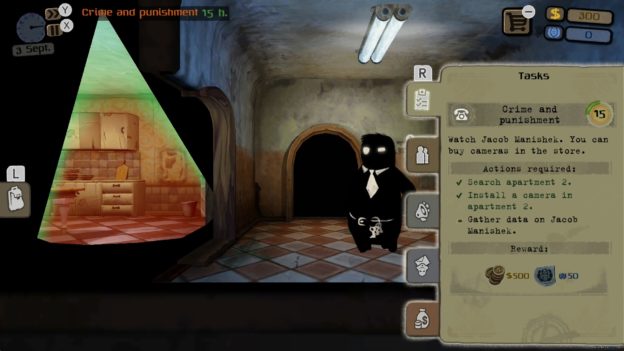 The small setting of an apartment block makes an interesting field of play that you quickly become accustomed to. The controls are generally good for getting around, as you can zoom in and out to see everything. It’s voyeurism at its best as you peek through keyholes and use your trusty keys to go inside when no one is around. There’s a definite test of your own morality as you make decisions that impact the outcome of the story.

There are other controls that are less intuitive though. Actions require you to select a target – a person or object – and interact with it. It can be fiddly to choose the right option, especially when you’re in a hurry. I’m also unsure why interactions aren’t immediate; instead, you have to wait for a little circle to fill in. My guess is that searching a table or installing a camera takes time, and this pause is more realistic, but what about peeking through a door? 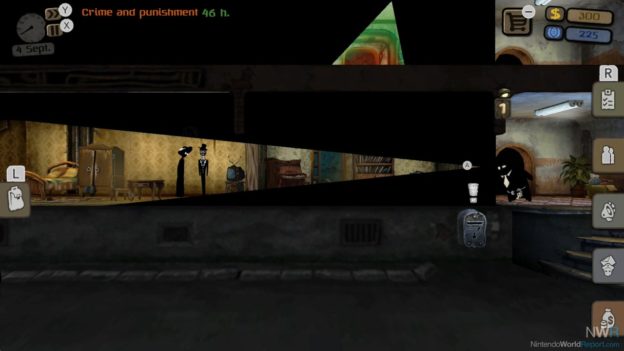 It’s also worth mentioning that Beholder isn’t a simple game. This is partly due to the continual threat of the government hanging over your head. Each task is timed, counting down until you’re either forced to pay a fine or dragged off to prison – essentially, it’s game over at this point. There are multiple endings though, and it is possible to come out unscathed with your family.

The other factor is that sometimes – particularly at first – it’s hard to know what to do. The menus are large and overwhelming and the tutorial system is somewhat lacking. It was frustrating at times trying to work out how to actually complete a task. There’s a steep learning curve here – although, once you’re on top of things, it is much more enjoyable. To help compensate for this difficulty, there are two modes on offer – Government Elite is the official way it’s “meant to be played”, while the Trainee option presents an easier experience. 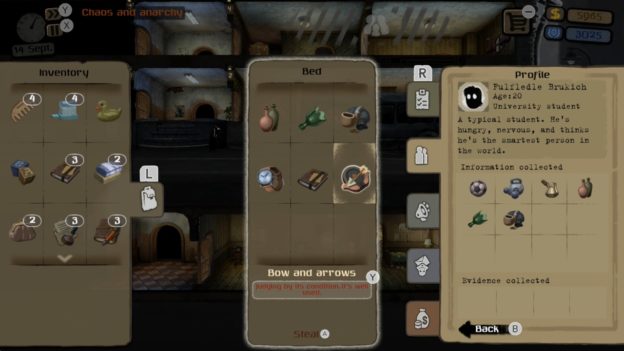 Another downside is the lengthy loading times, which are just a little too long for my liking at well over 30 seconds when the game starts. After this, it’s smooth sailing, but the load screen is noticeably long, especially when you have to restart several times while learning how to play.

The final point I’d like to make, while not exactly a criticism, is that Beholder could benefit from touchscreen controls.The screen just begs to be tapped when in handheld mode, and I found myself automatically trying this several times at first. This game would have been right at home with a stylus on the 3DS or Wii U.

Overall, Beholder is a good little game. There are a few negatives that keep it from reaching greatness, but it’s definitely worth checking out. It’s slick, dark and thoroughly addictive, with a unique concept that will keep you busy for many hours.

A dark game with a satirical edge, this is an addictive, fun and challenging game. The concept is unique with only a few frustrations, like a steep learning curve and sometimes fiddly controls, that stop this from being truly great. Worth checking out!