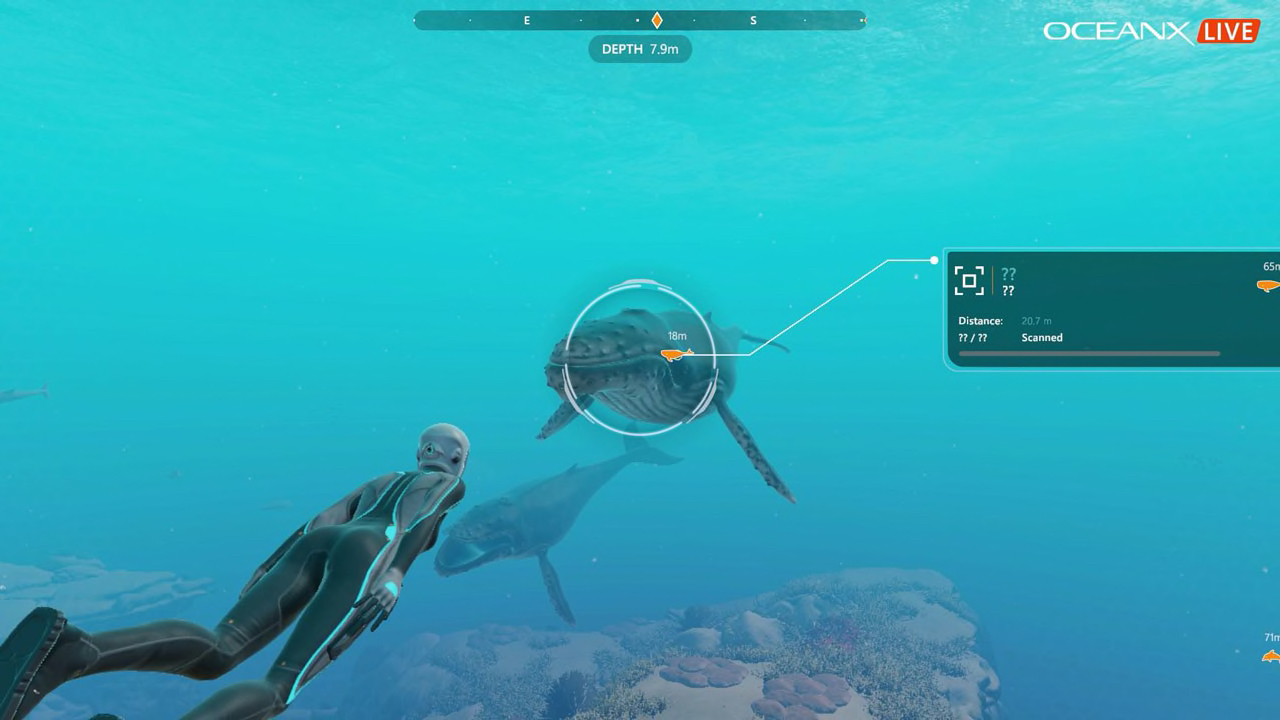 A relaxing dive in murky waters.

There comes a point in every game with an underwater setting when I want to just explore. I’m not sure if this stems from my dad’s SCUBA diving days or those horrible drowning deaths in Sonic the Hedgehog. But when I’m underwater, I don’t want to be rushed or threatened.

That’s what I got with Beyond Blue, E-Line Media’s adventure sim that boasts of being inspired by the Blue Planet II documentary. I’ve spent many a relaxing evening watching that series on BBC America, and its chill but cautionary vibe certainly does carry over.

Beyond Blue tells the story of Mirai. She’s part of a team of researchers using technology that’s not quite there yet to record information on various ocean-dwelling animals. The other team members are located above the surface, while Mirai is either diving or hanging out in her sub. Dialogue jumps from research to the politics of funding the research to how the research interferes with family obligations to how the research is necessary to save our seas, so it feels as much like a made for SyFy movie as a documentary. I didn’t get into the narrative at all, but that’s not required to enjoy the game.

The vast majority of Beyond Blue takes place in the water, with Mirai freely exploring the ocean depths. Each dive tasks her with swimming to a buoy to scan for targets which are then added to her map. It’s then just a matter of swimming to the targets and scanning them. More story, more targets, then back to the sub. 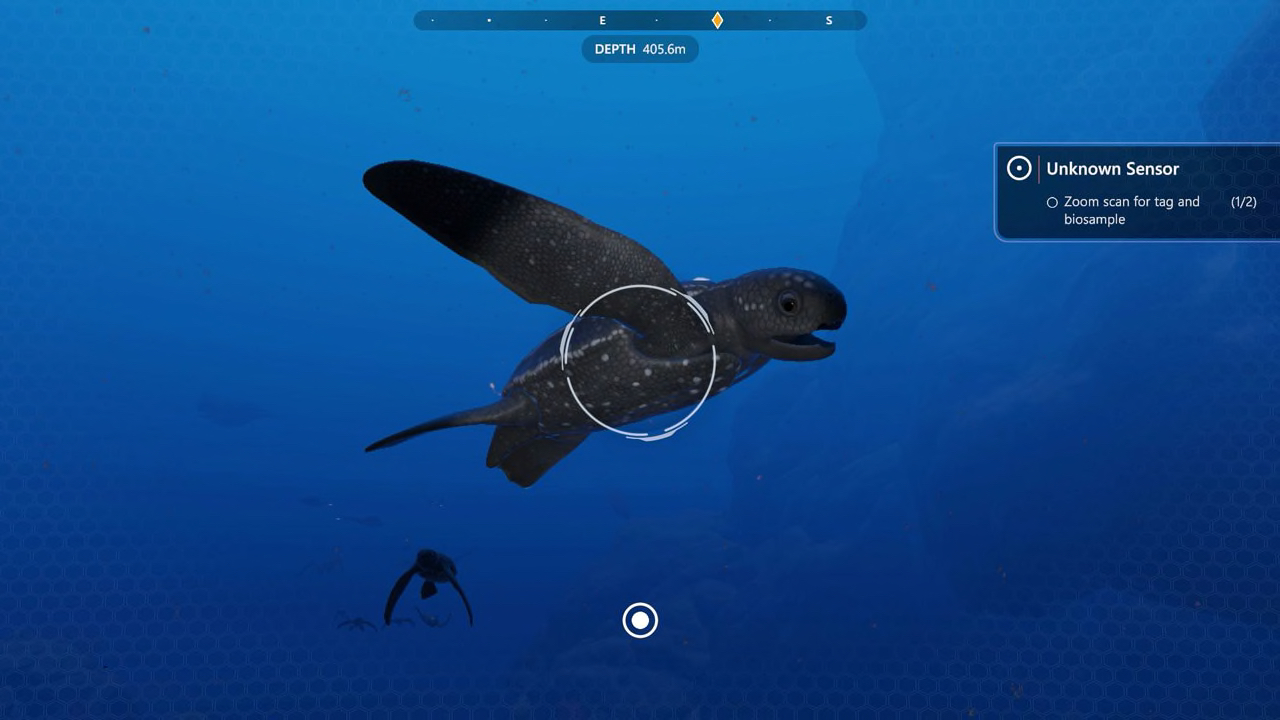 It sounds admittedly hollow in theory, but it works, largely because the environments are fun to explore. The developers have done a good job of capturing the wonders and life of the deep, and they understand the importance of exploration. Yes, you can swim straight to your target and be done with it, but you’re rewarded for your curiosity. Encouraged, in fact. When Mirai spots an octopus swimming into a tight cave on her first dive, she comments that she’ll of course have to follow it. There’s even a quick explanation of “swim crawling,” I believe it was called, and the possibility of getting stuck. Little moments like this keep things interesting.

Swimming itself is pretty simple, even if it’s not fully explained right away. How to dive and surface? You’ll figure it out by pressing buttons before the game bothers to tell you. Thankfully, Mirai does have the ability to adjust her swimming speed. This comes in handy when you’ve got a trek to your next objective, but the speed doesn’t turn off automatically. On numerous occasions, I had to remind myself to slow down when I was finding it hard to line up my sealife scans.

The stars of the show are the ocean environments, even if they’re oddly bright and prone to flickering. I understand that enhanced clarity accents the visuals, but I wonder if a little more lighting accuracy could’ve helped the problematic pop-ins. The various dives happen at different times of the day, but that mostly just alters the shade of the blue and green color palettes. 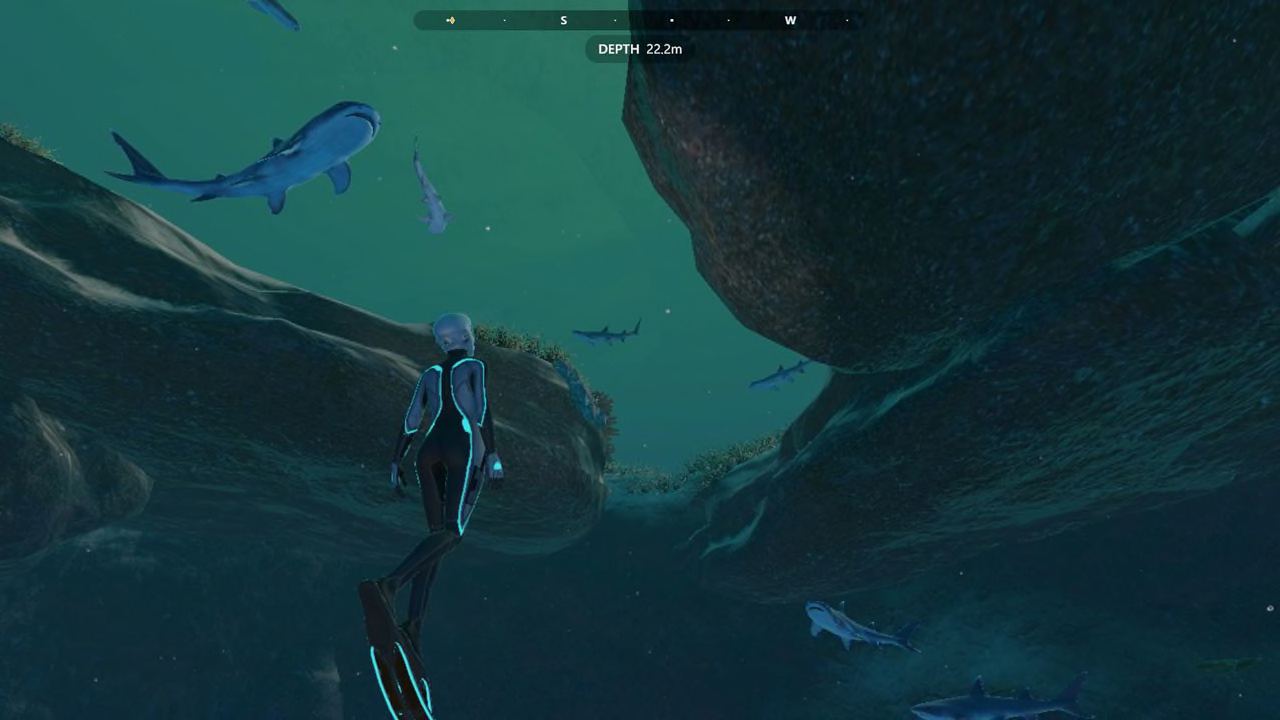 You can also tell from screen captures alone that the graphics are much better on other consoles or PC. That’s not to say the Switch version doesn’t eke out some exhilarating moments, but considering the game’s selling point are the visuals, it makes sense to experience it where those visuals are best.

Life on the sub, however, isn’t as entertaining, and it mostly just interferes with the gameplay. There, you can listen to an odd collection of songs that seems as if each developer got to pick one to place in the game. There’s also some literature to read, but clunky controls make them difficult to access. I stood in one spot and shifted left and right a dozen times in an attempt to get the A button on one, and even then had to spam A mid-turn to grab it.

Also, as I said before, the character drama that plays out on the sub seems a bit trite. I don’t know if it was the writing or the acting that put me off—or maybe the music playing in the background—but I always just wanted it to end so I could get back in my diving suit and into the ocean to see what I could discover next. 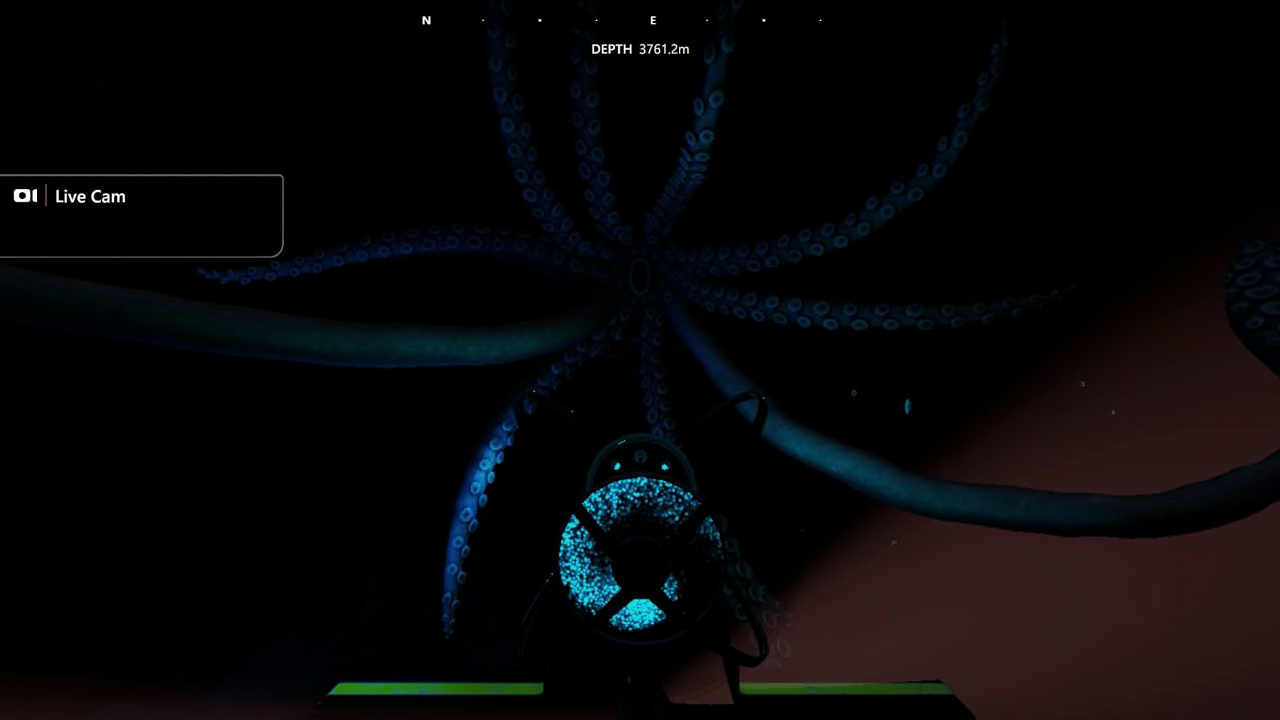 I can say the same for the included educational videos that can be viewed from the options menu. Some were interesting, some weren’t, but none of them were necessary. I guess that’s why they’re tucked away in a menu. The educational moments worked better when they came via Mirai and her crew during the dives.

So, as edutainment, Beyond Blue is only partially effective. The educational materials feel tacked on, and the between-dive submarine segments are largely unnecessary. But when you’re deep into a dive, the game’s visuals and fluid controls allow you to lose yourself in a world most of us will unfortunately never see in real life. I never did go SCUBA diving with my dad, and I’m sure a game like this is no substitute for that thrill. If I have to experience it vicariously through a video game, however, Beyond Blue hits enough of the right notes to make it worth the investment. If you can explore it with better-optimized technology, however, do it.

If you’re the type who likes to relax with the calming sites and sounds of an ocean life documentary, Beyond Blue will allow you to get more interactive with it. The educational and narrative moments don’t fully gel with the undersea exploration, and the visuals get murky on the Switch, but that won’t matter when you’re exploring these deep, safe waters.