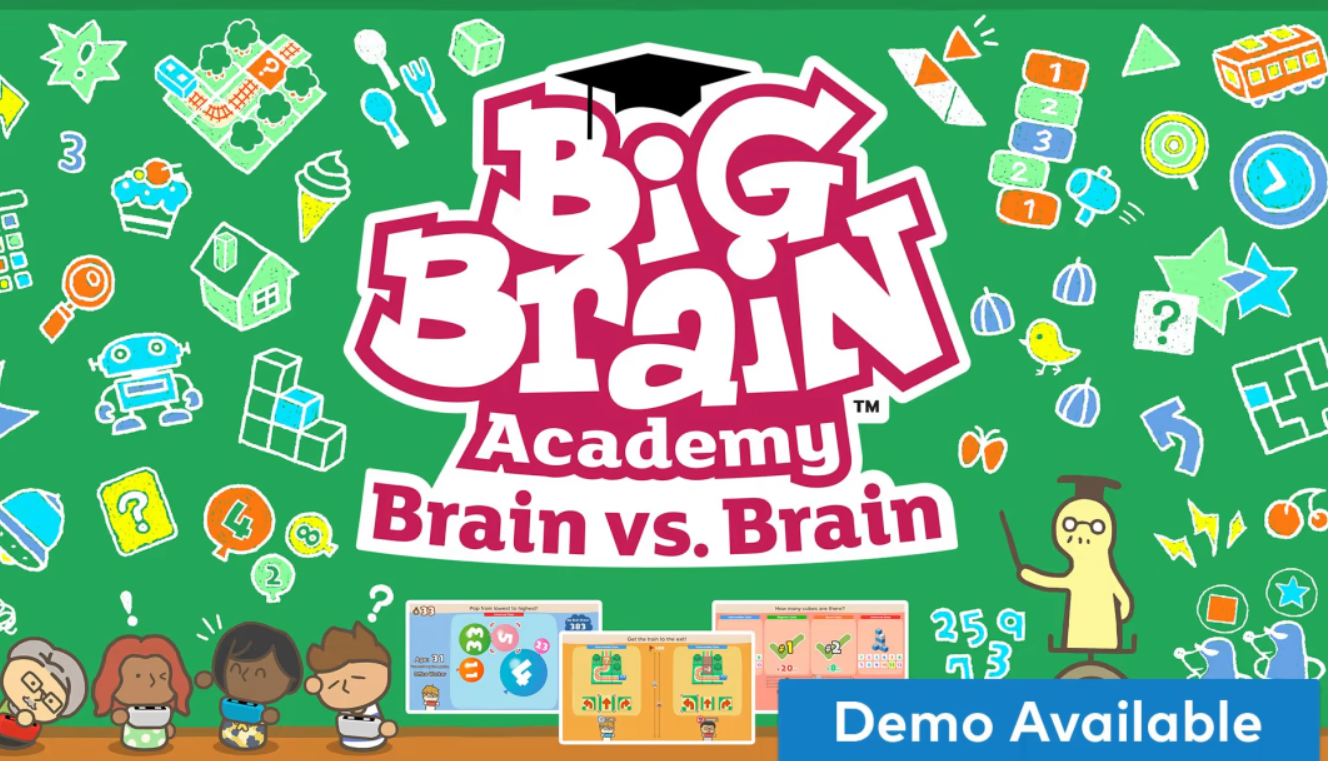 The core elements of the game remain the same and will be immediately familiar to anyone who’s tinkered with one of the previous titles. Given the high sales numbers of those entries, it’s highly likely you’ve played at least one of them. 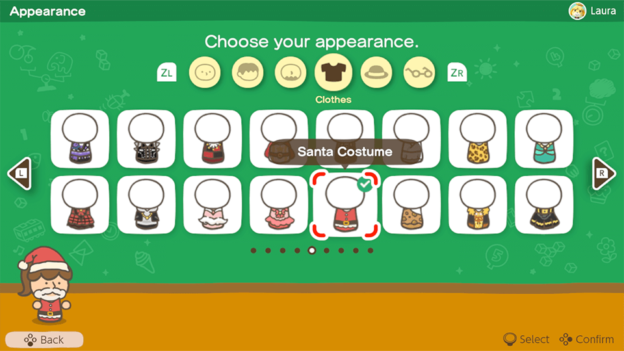 Our blobby headmaster Dr. Lobe is back to serve as a guide, taking you through the ins and outs of the gameplay. You’re initially presented with a short avatar-creation tool, which is a clever way to make you feel more included, with a cute and colorful version of yourself that even lets you choose a phrase that best suits your typical mood. This in-game personality serves as a major part of the replayability factor, which I’ll get to shortly.

The meat of the gameplay is in its Practice mode. You’re presented with five categories of brain functions: visualize, compute, memorize, analyze and identify. Each contains four activities to play and master, providing you with a total of 20 minigames.

Each activity is short and sweet, lasting only 60 seconds. As the timer ticks away and you answer questions correctly, you’ll up the ante, moving through more difficult questions until your time is up. The countdown puts the pressure on at the end as you try to get one or two more answers in. Beware though; you will be penalised for incorrect responses. 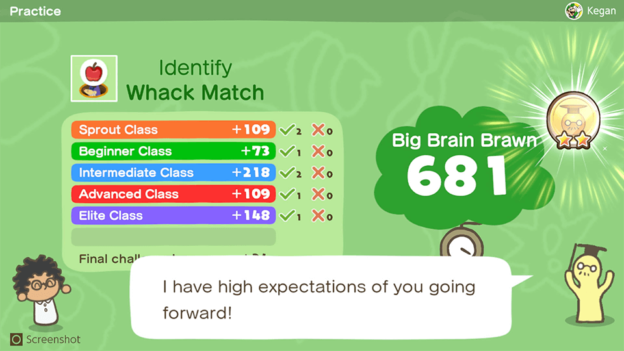 The goal of each activity is to score as many points as possible within the timeframe. This is based on speed and accuracy; the faster you answer – and the more correct answers – the higher the score. The higher your score, the more medals you’ll earn, with the ultimate goal of attaining platinum in every one. There’s even a special Super Practice mode unlocked when you have enough gold medals.

There’s a strong incentive to replay until you reach that high score – or give up in frustration. These are simple yet tricky brain-teasing activities! Whether it’s spotting the shadows of robots and flowers or working out whether ⅗ is less than ¾, it gets those mental juices flowing. I found myself having “just one more go” until I reached at least a gold level; on the other hand, once you’ve reached platinum, there’s less incentive to keep practicing. Thankfully there are a couple of other modes to keep you playing.

In Ghost Clash mode, you compete with anyone around the world by facing off against their ghost. Each challenge has you playing in real time at your end against a recording of another player. It means no waiting times yet still gets the heart racing. It’s a nice distraction, though it’s not my favorite. I prefer competing against myself. 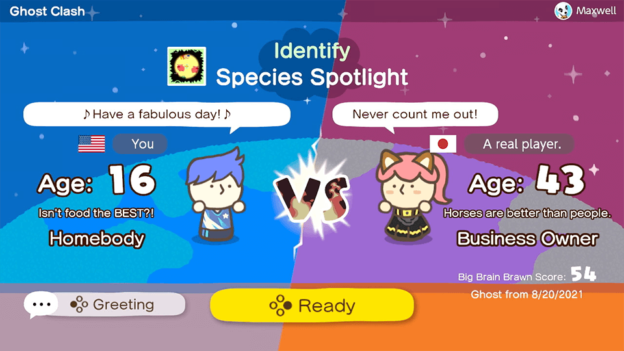 Test mode is like taking your final exam after all your practice. In this mode, you play one activity from each category, randomly selected and completed consecutively to give you an overall grade. I prefer the Brain Age style of scoring, which literally gives your brain an age, making me feel better about being an adult over 30 when my brain is apparently 21 years old; but it’s also nice to receive an A+ from Big Brain Academy. I always was an overachiever (eat your heart out, Lisa Simpson).

There are some super-fun activities on offer, each with cute animations to make them appealing. Whether it’s finding bugs with a spotlight or busting balloons in numerical order, the cartoony aesthetic maintains a light-hearted vibe while also challenging your mind. After all, Big Brain Academy is meant to be an enjoyable way to exercise that gray matter, rather than a chore.

The other reason to keep playing is the sheer number of unlockable customizations. When you create your first avatar, you’ll notice a lot of question marks covering other hats, clothes, and accessories. These are unlocked as you progress, with over 300 to collect. You can customize your little mini me to your heart’s content to suit your personality. It’s a fun way to reward your continued practice, with a handy percentage indicator that lets you know just how much you’ve unlocked; completionists will have a field day. 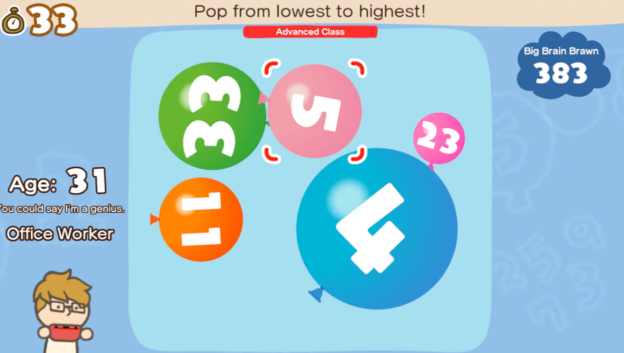 When it comes down to it, Big Brain Academy: Brain vs. Brain is just as enjoyable as the original titles. In fact, that might be the only downside to this version – there’s nothing really new on offer here, with many activities exactly the same as previous iterations. The 14-year gap makes Brain vs. Brain seem more like a resurrection than a sequel, bringing the existing games to a new generation. My kids were both born within the last ten years and were completely unaware of any previous titles. And they loved this game. I also found myself quite addicted, even after all these years.

Overall, Big Brain Academy: Brain vs. Brain is a fun way to exercise your mind, with short activities that keep you coming back for more. There’s little new content here, but it’s still enjoyable, especially for new audiences. Or even if you’ve just missed Dr. Lobe’s style of brain training over the past 14 years.

Big Brain Academy: Brain vs. Brain is a fun way to exercise your mind, with short and sweet activities presented in a cute and cartoony way. It plays similarly to previous entries, but it’s still enjoyable, especially for new audiences. Or even if you’ve just missed Dr. Lobe’s style of brain training.