Even in its infancy, the Nintendo Switch is slowly but surely beginning to amass a good selection of puzzle games that appeal to a wide arrange of audiences. Binaries for the Nintendo Switch is just another example of this, but it does take some time getting used to its own mechanics and its own deliveries of frustration. In short, Binaries from the get-go offers an admirable challenge with its levels, even if the entire package doesn’t seem to break any new ground.

The main hook behind Binaries is that you control two orange and blue balls simultaneously through single-screen 2D platforming puzzle mazes. The goal here is to guide each of the two lovable (as described by the game’s developer, Ant Workshop) balls to their respective checkered pattern goal lines without so much falling into a pit or touching one of the many well-placed spikes. Simple enough, right? Well, almost…if you are up to the possibility of being a glutton for punishment.

As mentioned before, you control both balls simultaneously with a single button press for jumping and movement via either the left or right analog stick. When the blue ball jumps or slides to the left or right, so does the orange one and vice versa. Monitoring both balls’ safely to their goals can be tricky to handle at first, but luckily the game’s introductory levels do lend a helping a hand in knowing the best course of handling simultaneous movement. Afterward, though, it’s much a different story in why Binaries can be sometimes fun but overly punishing for even newcomers. 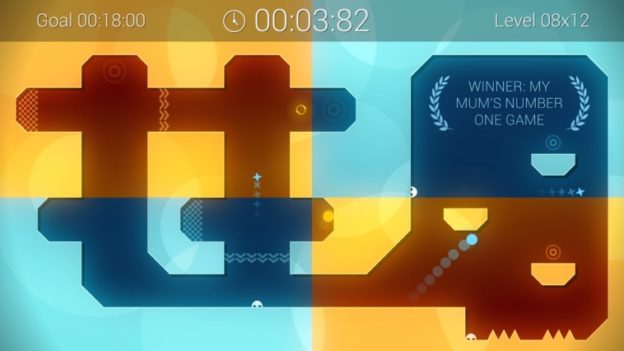 When it comes to a challenging puzzle platformer, Binaries holds no punches, so do expect a few moments where the life on your controller could be in danger. That is, Binaries is controller-crushingly difficult in many levels. Be prepared to witness spike death after spike death and have it ingrained into your subconscious. Now this difficulty doesn’t come to one’s shock, but I did notice several instances of the difficulty being a little spotty as your progressed. Luckily when either of your balls perishes, you are immediately thrown back in the thick of things in less than a second. So, even when you are resurrected for the umpteenth time, you can rest easy knowing you don’t have to wait that long for what could be your next failed attempt.

The levels in Binaries themselves are well-designed with each offering new ways to prevent both your orange and blue circular companions from reaching their own destination. Some levels have you forcing one ball into a corner in order to safely guide the other through a series of opposite color spikes that it’s impervious to, whereas others have you making a jump to force on ball onto a lower platform to its color-specific exit. 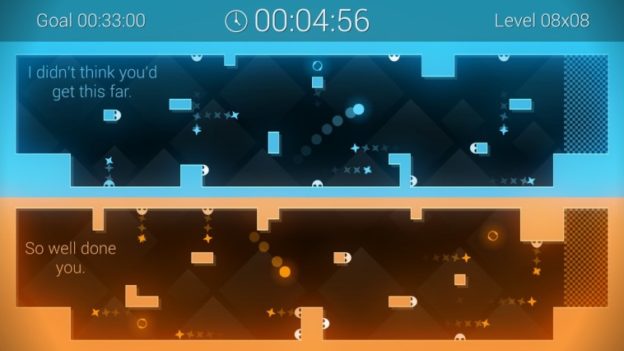 As a fairly minimalistic production, Binaries’ levels are pleasing to look at with its orange and blue color palette. Yet at the same time that exact color palette can get tiresome to look at for extended periods of playtime. Still, for as much as I had fun with many of these levels, they never really offered more from the occasional challenging jump or cleverly-designed arena. As a puzzle platformer, this competently made and playable; however, for those looking for something that breaks the mold of this genre, then you’ll be sadly disappointed. While the game doesn’t surprise you in the highest form, it does flatter you with both its gameplay mechanic of being able to monitor two objects at once to complete a common goal. 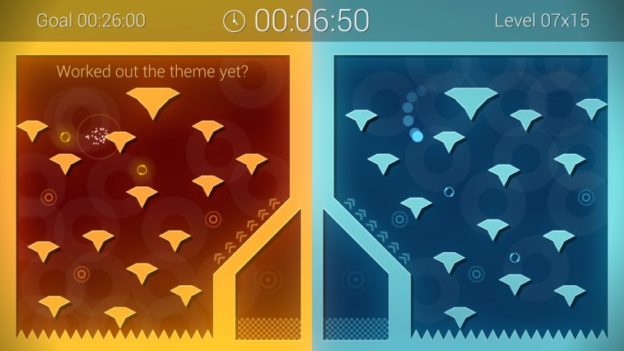 The straight-forward design of Binaries can be best described as soothing, jokey, and sometimes repetitive. Throughout each of the game’s 100-plus levels (with a simple map screen that gives the player non-linear routes) your ears will be entertained by an adaptive soundtrack that changes depending on how well you do. If you are stuck, the music slows down. If you are near the exit or succeeded in avoiding a few spikes, then the music amps up a little. While the music seems fairly limited with its funky upbeat, it’s almost as if it is encouraging you on the journey. 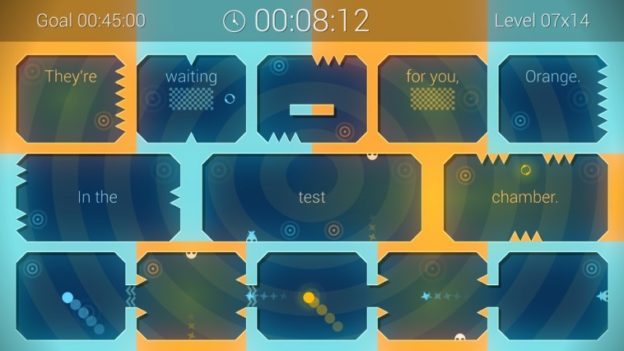 Not only are their encouraging bits of sound, but some levels are littered with signs that offer help or are there simply for a wasted joke. For example, one level has “This level is a lot easier than it looks” at the bottom of the screen. As you progress through the obstacles, the words change stating as if the game was wrong with its initial claim. When it comes to helping the player or giving out hints, these aren’t particularly useful and mainly present as a cosmetic decoration to the game’s minimalist design. Then again, the game is open to saying it’s jokes aren’t all that funny to begin with, so at least it’s honest in its delivery.

While Binaries doesn’t offering anything bold or groundbreaking as a puzzle platformer, it’s still a fun and challenging experience for those familiar of the genre or wanting 100 percent completion. At times, Binaries’ up and down difficult may be enough to sway away newcomers, but it’s one-player co-op concept alone is worth a simple look for those wanting a quick challenge.

Binaries doesn’t break new ground in the puzzle platforming genre, yet there’s well enough of a challenge (and fun) in this package for one to waste a few hours with.