Black Hole is an arcade-style twin-stick shooter developed by Dufgames. Set in space, it’s a simple concept that we’ve seen in various forms over the years. So how exactly does this one stand out from the crowd?

Let me get this out of the way: I had a great time with Black Hole. Shooters are straightforward in their design, which makes it a seemingly hard genre to get wrong – but Black Hole does a nice job of holding its own in this rich gaming field. The gameplay takes place within a single screen, set deep in the swirling galaxies of space, amid the terrifying beauty of a black hole, naturally. Apart from being visually interesting, the backdrop exudes its own gravitational force that causes a slight rotational effect on any floating elements. 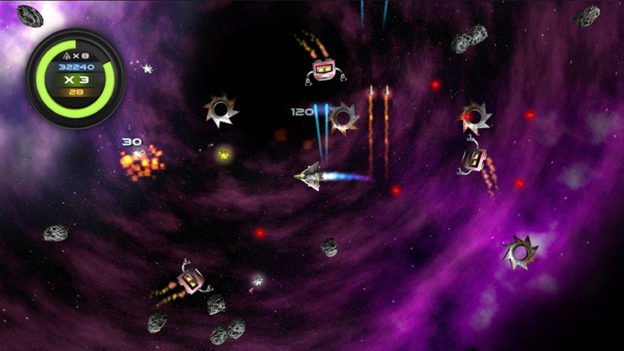 The game offers one simple mode, aptly named single player – an oddity since there is no multiplayer feature. Within this mode, there are four options: Practice, plus three difficulty levels, Easy, Normal and Hard.

Gameplay takes place over 40 levels, spaced out across four “worlds” of 10 levels each. Each world is themed slightly differently and ends with a boss battle. For example, one world is more of an icy design, with blue-tinged enemies. Another is red, a fiery world. The enemies change each time too, ranging from simple ships and meteors to robots that split and chase you. It gets increasingly difficult, almost to the point of becoming manic – which is a staple of the genre. Black Hole maintains a level of fun throughout though. 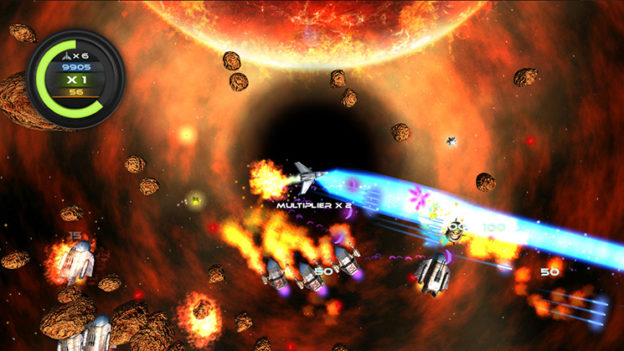 Among the debris of fallen enemies, you’ll also be tempted to collect space dust to aid you in your quest. There are four conveniently colored collectibles: green replenishes your health, blue acts as a temporary shield, white provides extra points to your total score, and yellow gives upgrade points for your ship.

There are three ships to choose from, but the robust upgrade system lets you alter your ship after each level. Your ship is upgradeable in three ways: primary weapons, secondary weapons, and the ship itself, e.g. shield and speed. These are then divided into categories, so you can increase the effect of your weapons, or its speed, or the number of simultaneous bullets. These features add an extra element to the game, allowing you to pick and choose your preferred tactic as you progress. 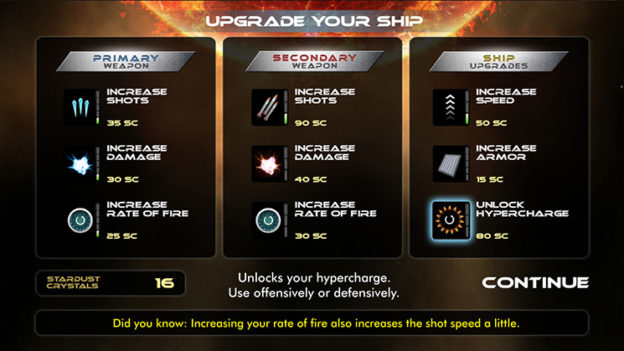 Black Hole looks great, with crisp and sharp graphics that seem to have been designed with the user in mind. There’s even a Colorblind mode for players who have trouble distinguishing between colors. Indeed, there’s such a real desire to appeal to fans that there’s a feedback feature on the title screen. A simple press of the Y button and you can submit your anonymous feedback directly to the developers. It makes me feel valued as a player to see the team take an active interest in improving my gaming experience, which they promise will occur via future updates. This is a unique and very welcome touch, in my opinion, and I can’t wait to see what comes next. Hopefully a two-player mode.

Overall, Black Hole is a refreshing little shooter. I had a blast with it, and really value the developer’s interest in design and user feedback. The game looks great and plays well, taking a simple concept and making its own statement on the genre; I think it has even more potential through future updates. In the meantime, at $5.99, this is a great value title for single players looking for some shmup fun.

Black Hole is a fun and challenging shooter that puts its own stamp on the genre. It’s great value and, with a key feedback system, will hopefully get even better through updates. As it is, it looks great and plays well, and is definitely worth checking out.