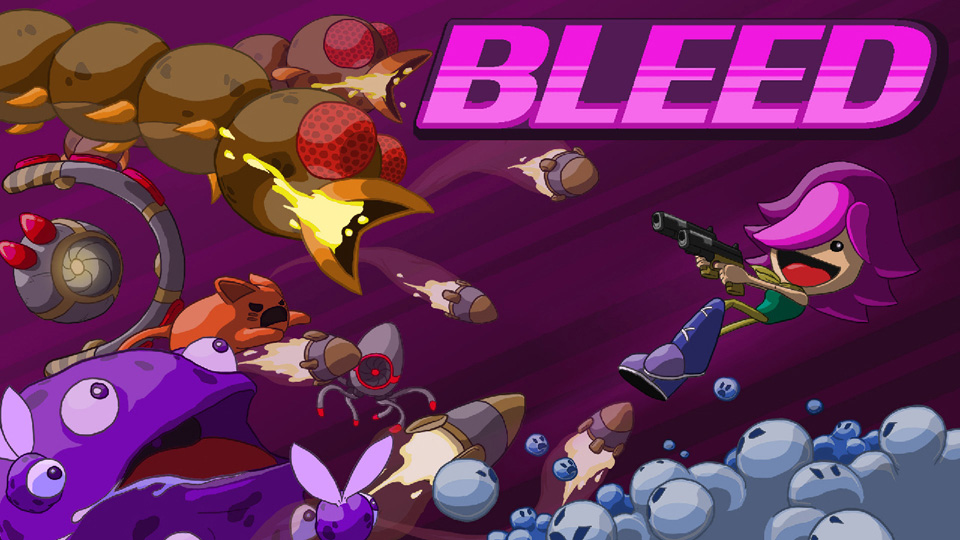 Bleed is a 2D run and gun action platformer that’s, at times, challenging with its arcade-y mechanics and slightly charming (and simple) pixelated aesthetics. It’s the type of small game that’s quite stylish, yet still feels familiar in how it plays. Originally released on Steam back in 2012, Bleed is developed by a one-man team, Ian Campbell of Bootdisk Revolution. You take control of Wryn, a girl who wants nothing more than to become the ultimate video game hero. In order to achieve this, Wryn must defeat the greatest heroes of all time throughout seven stages to claim the coveted title. 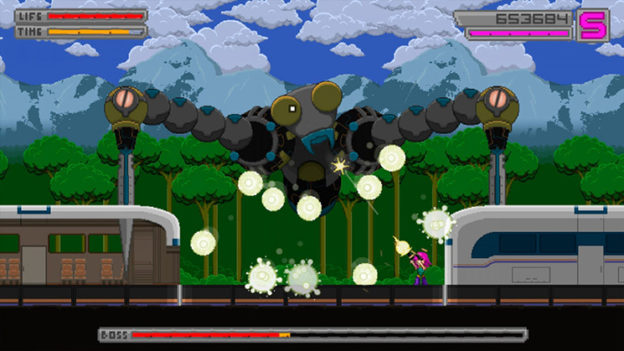 Controlling Wryn is done through a fairly unique control scheme that allows you to shoot in one direction with the right stick while moving with the left stick. At first, the controls took some time getting used to as they felt rather slippery when I attempted to perform Wryn’s dashes and quick dodges. That aside, what makes Bleed an intriguing action platformer is two important gameplay hooks which are Wryn’s helpful acrobatic dodge/jumping skill-set and her ability to slow down time. While using the ZR button, Wryn can perform zips and dashes through the air with the opportunity to use three jumps to make some cool maneuvers to evade enemies. These moves are very fluid and can be the difference in boss fights and platforming obstacles. 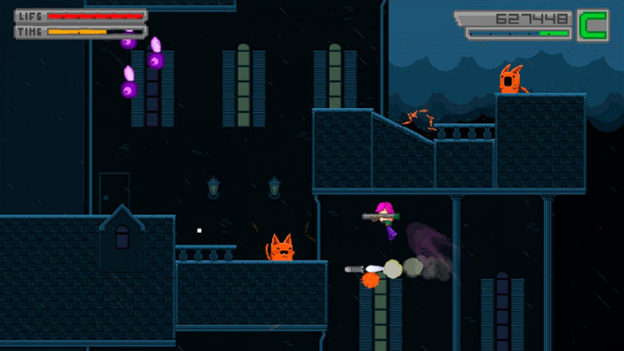 On the other end of these neat mechanics, there is Wryn’s use of slowing down time, which is both fun to use and a lifesaver in tough situations in the game’s varied boss and enemy encounters. Although, your use of Wryn’s bullet time-esque ability is limited, which drains with each use and refills in a matter of seconds depending on one’s usage. This ability here is crucial to success in Bleed. After getting the hand of Wryn’s bullet time, it soon became incredibly satisfying to pull off quick escapes from multiple projectiles in the heat of a boss battle. Trust me, even when you aren’t engaging with an enemy, it’s kinda cool to test out how well you can bounce around walls and platforms to better your own strategy in each level.

Even when you do complete the rather short adventure, there are other modes to sink your teeth into. First, there’s Arcade Mode, which has you surviving the main game with one life, and then there’s a Challenge Mode that allows you to battle up to three previously fought bosses. But aside from the local two-player co-op and the prospect of unlocking three other characters with their own varying gameplay styles, there isn’t much beyond those few extras (or beating the game at a higher difficulty) that make the package rather hollow. It’s a shame, considering Bleed is surprisingly a fun experience that had me wanting to beat each of the level’s at a higher difficulty. 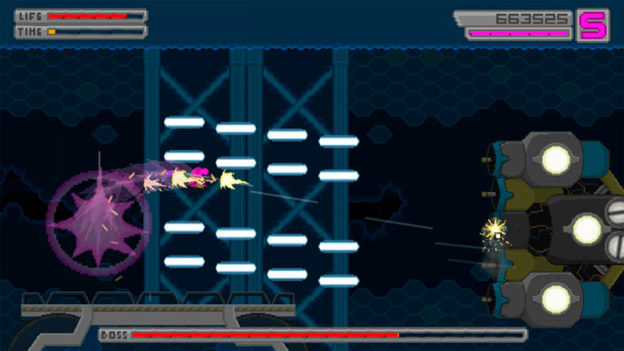 Overall, Bleed is a typical yet unique run and gun shooter which provides a short experience, with fun hooks likely to entertain fans of the genre. However, its price tag combined with its extremely short length (I clocked in around an hour and a half upon defeating Wryn’s final foe) and limited extras just doesn’t justify a purchase right away even with its extra play modes. Bleed is a colorful, fun game that certainly should be on your radar if you want a quick distraction. But, even if you remain curious, please, do wait for a sale, because much like Wyrn’s zippy movements through the air, it’s gone in a flash.

Bleed offers a unique and fast-paced take on the run and gun genre with colorful and charming results that’s sure to keep you entertained. However, it lacks in substantial postgame content alongside a story mode that is over before you know it.